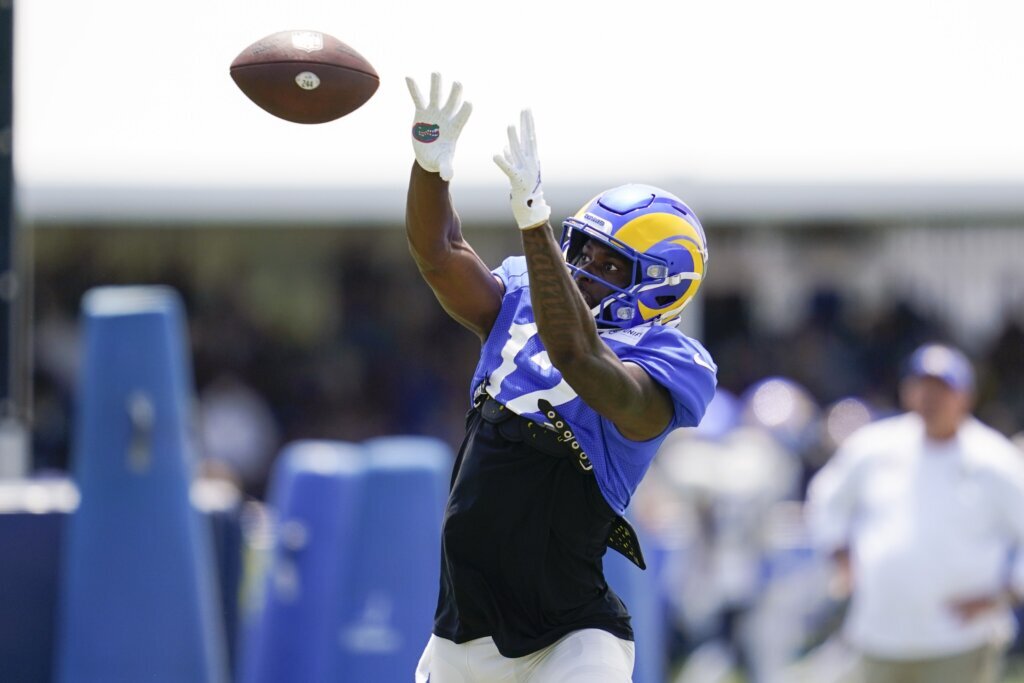 Rams coach Sean McVay said Monday that Jefferson will have the “minor” knee surgery Tuesday. Jefferson will need at least a few weeks to recover, putting in doubt his status for the Rams’ opener against Buffalo on Sept. 8 at SoFi Stadium.

“We’ll see what his availability looks like to start the season, but it was really positive news we got on him,” McVay said after training camp practice at UC Irvine. “So we’ll get his knee cleaned up tomorrow.”

McVay also said Matthew Stafford is “still feeling a little bit of pain” in his right arm, so the Rams are limiting the quarterback’s involvement in team drills.

Jefferson is heading into his third NFL season after starting all 17 games and all four playoff games last year for the Rams. He had 50 receptions for 802 yards and six touchdowns last season before adding nine catches in the playoffs, including four catches for 23 yards in the Super Bowl — immediately followed by his famous rush to the hospital for the birth of his son.

Jefferson was second on the Rams’ roster in yards receiving behind Super Bowl MVP Cooper Kupp, who posted one of the most prolific seasons in NFL history. But Jefferson never had more than six catches for 90 yards in any NFL game, largely playing a complementary role last season behind Kupp and both Robert Woods and Odell Beckham Jr.

McVay said the injury report on Jefferson’s knee was “encouraging, and we know he’s going to be back sooner than later.”

“If anything, you (already) know Van can play football,” McVay added. “He’s done it at a really high level for us going into Year 3, but this gives us an opportunity to really evaluate some of these other receivers.”

Among those receivers, McVay mentioned Tutu Atwell, the undersized second-round pick whose rookie season ended early because of injury, and second-year pro Ben Skowronek, who played a surprising amount down the playoff stretch for the Rams. McVay also said he’ll give more offensive playing time to Brandon Powell, the journeyman receiver who caught on as the Rams’ kick returner last season.

McVay then smiled and added: “We’ll look at those guys, and then we’ll continue to see if we can figure out when Odell will come back at some point as well.”

Beckham is unsigned after joining the Rams midway through last season and excelling all the way to the Super Bowl, where he tore a knee ligament. The veteran is unlikely to be ready to play before late in the regular season, but McVay and the Rams have persistently courted Beckham to return to them when he’s healthy.

Stafford had what he has characterized as “a procedure” on his arm in the offseason after leading the Rams to a title in his first season on the West Coast. He didn’t throw any serious passes during Los Angeles’ offseason program, but he is throwing in a limited capacity in training camp.

Stafford made more than 40 throws during individual workouts Monday, but sat out the team portions of the Rams’ drills.

“He’s got so much experience,” McVay said. “The most important thing is for him feeling good and healthy on Sept. 8. We could certainly push, and he could really grind through this, but that’s not the goal with somebody like him. It’s not something that we’re concerned about. We just want to be smart with somebody that’s as important as our quarterback is.”