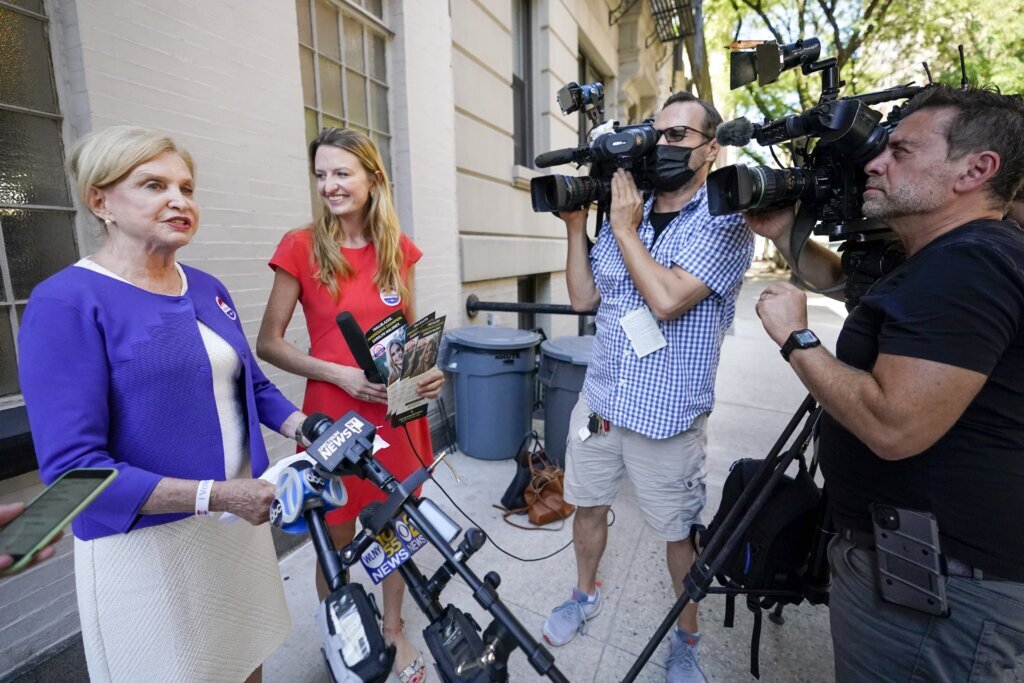 NEW YORK (AP) — Redrawn maps shuffling U.S. House districts in New York are threatening the political career of a first-term progressive and will ensure the ouster of one of the most powerful Democrats in Congress.

The scramble has led to contentious races between Democrats in the second-largest blue state in the country, with both challengers and incumbents sensing a rare window to seize or lose power in Tuesday’s primary elections.

There’s an added degree of uncertainty to how New York’s congressional primary contests will shake out as voter turnout is expected to be low. It’s the second primary election day in New York this summer after statewide and state assembly primaries were held two months ago. New York voters are not accustomed to casting primary ballots this late in the summer — and certainly not used to casting them twice — and many are finding their longtime district lines have shifted, adding to confusion.

Primary elections for House seats in Florida will feature a test for a conservative firebrand with the specter of a federal investigation looming over him and a rematch between two Democrats after a razor-thin loss last year.

END OF AN ERA

Maloney, 76, and Nadler, 75, are likewise each trying to claim distinction Tuesday as they face off in a race for New York’s 12th District.

Challenging them both is 38-year-old lawyer Suraj Patel, who argues it’s time for a new face in Congress.

A CROWDED FIELD FOR AN OPEN SEAT

With Nadler and Maloney running in the district immediately north, a congressional seat covering southern Manhattan, including Wall Street, and Brooklyn is a rare open contest in one of the most liberal and influential areas of the country.

New York’s 10th District has attracted a bevy of progressive candidates, including an incumbent congressman from the New York City suburbs, Mondaire Jones, who moved to the area to run. Jones, one of the first openly gay Black members of Congress, said it’s important to have an LGBTQ representative in the district that includes the West Village and the Stonewall Inn, the site of riots that gave birth to the gay rights movement.

Daniel Goldman, a former federal prosecutor who served as counsel to House Democrats in the first impeachment inquiry against Trump, is among his leading challengers.

Maloney, a Democrat who became New York’s first openly gay congressman when he was elected a decade ago, is facing a primary challenge from state Sen. Alessandra Biaggi.

Biaggi, a 36-year-old progressive endorsed by Rep. Alexandria Ocasio-Cortez, is a granddaughter of former Bronx congressman Mario Biaggi. She has sought to portray Maloney as out of touch and part of the establishment.

Maloney, who has the backing of former President Bill Clinton, has campaigned on Democrats’ recent legislative wins in Congress and warns the seat could fall to Republicans in November if the Democratic nominee is too liberal.

Jacobs decided not to seek reelection after facing backlash from his own party for voicing support for an assault weapons ban following a racist mass shooting in his hometown of Buffalo in May.

Paladino, who unsuccessfully ran for governor in 2010, has a long history of inflammatory and offensive remarks, including recent comments that praised Adolf Hitler and circulated conspiracy theories around mass shootings.

New Yorkers are not only casting votes in primary races Tuesday but are also electing two new House members to fill vacancies for the rest of the year.

One of the special elections will be a battleground race in southern and central New York to replace Democrat Antonio Delgado, who became New York’s lieutenant governor. Republican Marc Molinaro and Democrat Pat Ryan are vying for the seat in what is currently New York’s 19th Congressional District.

In western New York, Democrat Max Della Pia and Republican Joe Sempolinski are running to serve out the rest of the year in what is currently New York’s 23rd District. They are competing in a GOP-favored seat to replace Republican Rep. Tom Reed, who resigned in May, a year after he was accused of sexual misconduct.

The primary in Florida will be a test of whether Rep. Matt Gaetz, a Trump protégé who is under federal investigation in a sex trafficking case, is losing support among moderate Republicans.

Gaetz has not been charged and denies wrongdoing. He is facing a challenge from Mark Lombardo, a former Marine and executive at FedEx who has blanketed the western Panhandle with attack ads centering around the investigation as he tries to take him on in Florida’s 1st Congressional District.

Competing in the Democratic primary for the seat in the heavily Republican district is Rebekah Jones, a former Department of Health employee who questioned the state’s COVID-19 data, though a state inspector general’s report concluded her allegations were unfounded. She has tapped into national support for fundraising, bringing in more than $500,000, and is facing Peggy Schiller, a local Democratic Party activist who has only raised about $34,000 for the race.

Democratic Rep. Sheila Cherfilus-McCormick, who has only been in office since January, is facing a tough primary challenge from a rival she beat in a Florida special election by just five votes.

Since then, the rivalry between Cherfilus-McCormick and Holness has only grown more bitter. Last month, Cherfilus-McCormick sued Holness, alleging defamation and seeking more than $1 million in damages. The lawsuit alleges that a Holness aide accused her in a text message of embezzling millions to help her buy the congressional seat.

Holness told NBC6 in South Florida that he wasn’t consulted about the text message before his campaign sent it out. But he says he still has questions about Cherfilus-McCormick’s campaign finances. Cherfilus-McCormick maintains that she used money from her business for her campaign.

The winner of Tuesday’s Democratic primary is expected to cruise to victory in November in the heavily Democratic district.

Republicans have another pickup opportunity in the seat held by Democrat Stephanie Murphy, who isn’t seeking reelection.

The new configuration of her district, Florida’s 7th, shifts it from competitive to comfortably Republican.

State Rep. Anthony Sabatini, one of the Florida Legislature’s most conservative members, is part of an eight-candidate primary. Sabatini is known for bucking his own party in the Legislature because it was not conservative enough for him. He has also called for defunding the FBI after the search of Mar-a-Lago and promoted false claims of voter fraud in the 2020 election.