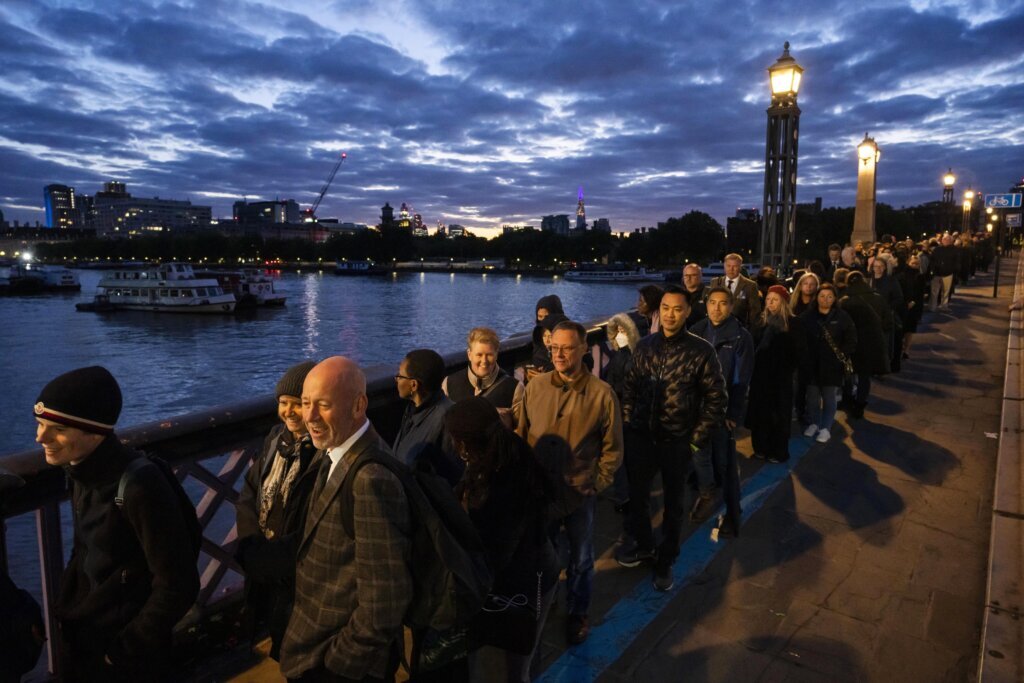 LONDON (AP) — A delegation of Chinese officials reportedly has been barred from visiting the historic hall in Parliament where Queen Elizabeth II is lying in state, as geopolitics cast a shadow over the solemn pageantry surrounding the monarch’s death.

The Chinese ambassador to the U.K. has been banned from Parliament for a year after Beijing sanctioned seven British legislators last year for speaking out against China’s treatment of its Uyghur minority in the far-west Xinjiang region.

The office of House of Commons Speaker Lindsay Hoyle declined to comment Friday on the report in Politico of the Chinese delegation being barred from visiting the queen’s coffin at the Houses of Parliament.

In Beijing, Chinese Foreign Ministry spokesperson Mao Ning said she had not seen the report, but said that as host of the queen’s funeral, the U.K. should “follow the diplomatic protocols and proper manners to receive guests.”

A Chinese delegation is expected to attend the queen’s funeral on Monday, which is in Westminster Abbey rather than in Parliament. Organizers of the funeral have not published a guest list and it is unclear who from China might attend.

The sanctioned British legislators wrote this week to officials expressing concerns that the Chinese government has been invited to the queen’s state funeral on Monday.

Conservative lawmaker Tim Loughton told the BBC that the invitation to China should be rescinded, citing the country’s human rights abuses and treatment of Uyghurs.

After a day out of the public eye Thursday, King Charles III was traveling to Wales on Friday on the final leg of his tour of the nations that make up the United Kingdom in the aftermath of the death of his mother last week after 70 years on the throne.

Charles, who for decades before his accession to the throne was the Prince of Wales, visits Llandaff in Cardiff for a service of prayer and reflection in honor of his late mother and will receive condolences from the Welsh parliament, the Senedd.

In London, the line of people waiting to pay their respects to the coffin lying in the 900-year-old Westminster Hall grew early Friday to nearly 5 miles (8 kilometers), snaking along the south bank of the River Thames. People joining the back of the queue can expect to wait 14 hours before reaching the flag-draped coffin in Westminster Hall.

Charles returns to London later Friday and will briefly stand vigil at his mother’s coffin in the evening with his siblings, Princess Anne, Prince Andrew and Prince Edward.