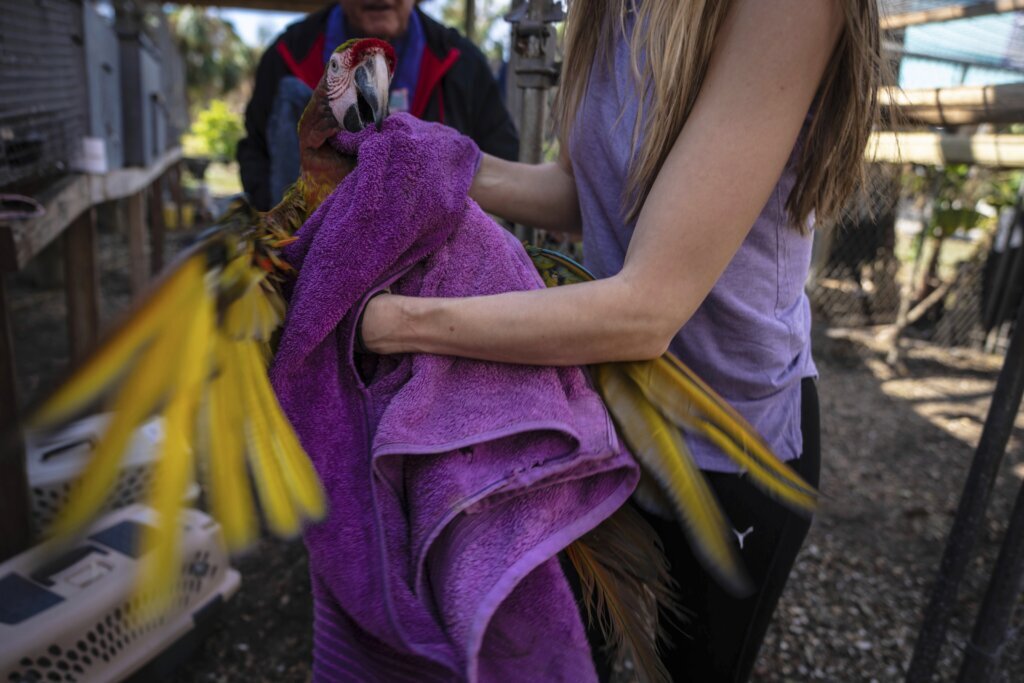 PINE ISLAND, Fla. (AP) — Will Peratino and his partner Lauren Stepp would not leave their Pine Island compound, even…

PINE ISLAND, Fla. (AP) — Will Peratino and his partner Lauren Stepp would not leave their Pine Island compound, even as authorities pleaded with residents to abandon their homes because of damaged roads, including a collapsed bridge that prevented deliveries of food, gas and other life-sustaining supplies.

But the couple could not leave without their two lemurs and flock of birds — 275 parrots, including some of the world’s rarest.

So a rescue mission — dubbed “Operation Noah’s Ark” — was launched Tuesday to catch, cage and ferry the birds off the island, as a condition to persuade Peratino and Stepp to leave the island.

“We would not abandon them. I would never leave them. Never,” said Stepp, as volunteers worked on collecting the flock from dozens of coops at the Malama Manu Sanctuary. “If they cannot be fed or watered, they will die. And I can’t live with that.”

“Malama” is the Hawaiian word for protect, “manu” means bird.

The birds have been relying on food donated by wildlife officials since Hurricane Ian hit, but the supply of fruit, peanuts and other edibles would soon be hard to come by because of the downed bridge and the scarcity of gasoline on the island.

In the hours before the storm, the sanctuary owners herded their flock of birds and packed them into their home to shield them from the ferocity of the elements.

“You don’t know what we’ve been through here. We had four feet of water in the house, damned-near drowned,” Peratino said, before succumbing to tears.

“To have every bird safe is a huge undertaking,” Peratino said. “I mean, it’s almost impossible to do. So the kind of help we’ve gotten has been invaluable.”

Many of the birds were rescued from homes that could no longer care for them. Some are used for breeding rare species.

While the focus of many search and rescue missions has been on human life, there have also been pet rescues.

Bryan Stern, the founder and leader of Project Dynamo, which assembled four boats for the mission, said his team has rescued at least six dogs, three cats and, before Tuesday’s massive rescue, three birds.

“Our animal numbers are about to be blown out of the water by 100 cages of parrots,” Stern said, before embarking on the rescue mission.

“It’s been nuts,” said James Judge, who owns the boat “Slice of Life,” which led the small flotilla of rescue boats.

“Will and Laura, who own the sanctuary, their hearts and souls are in the birds. So they’re going through their own suffering from the hurricane,” Stern said, “and having to rebuild their lives. They lost all kinds of stuff. Is the answer to that to lose more?”

The crew of volunteers was not about to let that happen.

For several hours Tuesday, the volunteers stuck nets and their bare hands into cages to pen the birds in cages. The birds — from macaws to cockatoos and rare specimens of king parrots (only two dozen pairs are kept in the United States) — squawked and flapped their wings and their handlers put them in cages.

Some whistled and spoke, including several with mischievous vocabularies.

Ghassan Abboud, a Chicago dentist who owns a bird farm in West Palm Beach, is an acquaintance of the sanctuary owners. When he heard of their plight, he mustered his resources to help. He had imagined commissioning a small boat to ferry cages from Pine Island to a dock on the mainland, where an air-conditioned trailer would transport the birds to his property across the Florida peninsula.

But by chance he came across the Project Dynamo team, who have been volunteering to help rescue people stranded by floodwaters and damaged roads.

“I could never write a script like this. It was perfect. I thought I’d be back all day long in a small boat,” Abboud said. “What these guys have done has been unimaginable. They dedicated their resources. They saved so many birds.”

Corrects spelling of the first name of Bryan Stern.