Review: ‘Game of Thrones’ roars back to life with prequel series ‘House of the Dragon’ 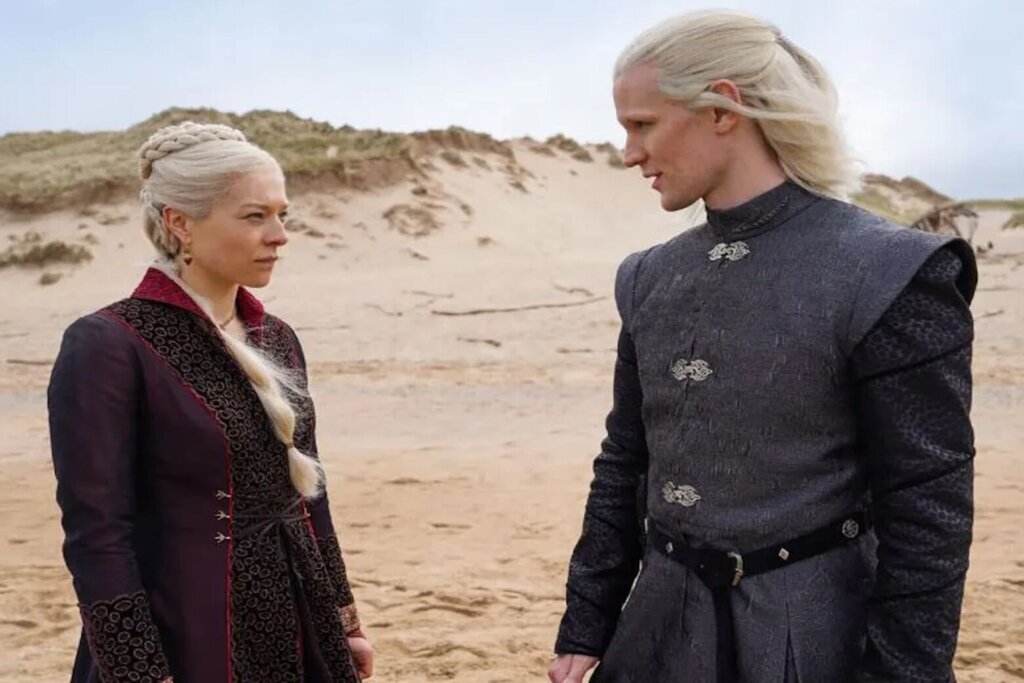 Three years after HBO’s “Game of Thrones” ended in controversy, fans can tune in Sunday for the prequel “House of the Dragon,” created by George R.R. Martin and Ryan J. Condal.

It’s been three years since HBO’s “Game of Thrones” ended in controversy, with a much-maligned eighth and final season that felt like a rushed conclusion to the otherwise brilliant fantasy world-building that fans had reveled in.

This Sunday, fans can tune in for the prequel “House of the Dragon,” created by George R.R. Martin and Ryan J. Condal (“Colony”), who take over for David Benioff and D.B. Weiss. The season was filmed between April 2021 and February 2022 in England, Portugal, Spain and California; the 10 episodes will drop in weekly installments instead of one giant binge.

Based on Martin’s 2018 novel “Fire & Blood,” an extension of his blockbuster book series, “A Song of Ice and Fire” (1996-2011), the prequel series explores the backstory of House Targaryen, including the war of succession known as the Dance of the Dragons, which happened 172 years before the birth of “G.O.T.” fan favorite Daenerys Targaryen.

A more immediate threat comes from their sinister uncle, Prince Daemon (Matt Smith), who schemes like Claudius in “Hamlet” or Scar in “The Lion King.” He’s introduced in a backlit over-the-shoulder shot on the Iron Throne. Rhaenyra asks, “What are you doing uncle?” “This could be my chair one day,” Daemon says. “Not if you’re executed for treason,” she replies.

Daemon’s political rival is Ser Otto Hightower (Rhys Ifans), who is Hand of the King (think Ned Stark from the original pilot). His daughter, Lady Alicent Hightower (Emily Carey/Olivia Cooke), is best friends with Princess Rhaenyra, reading legends about King’s Landing in the history books and quizzing each other with trivia as exposition for the audience.

Also keep an eye on Lord Corlys Velaryon (Steve Toussaint), known as The Sea Snake for being the best seafarer in the history of Westeros. His wife, Princess Rhaenys Velaryon (Eve Best), is a dragonrider cheered as the “Queen Who Never Was,” having been passed over as a potential ruler of the Seven Kingdoms in favor of her cousin, King Viserys I.

Those are the players this time around. Their faces are different, but they live by the same deadly rule: “When you play the game of thrones, you win or you die. There is no middle ground.” Or, as the new “House of the Dragons” pilot says, “The only thing that could tear down the House of the Dragon was itself.” That’s how all empires collapse, from within.

Director Miguel Sapochnik juxtaposes patriarchal dialogue with feminist foreshadowing: Rhaenyra pours drinks for her father, Viserys, who says, “My son will be born and the whole realm will celebrate.” “We have no way of predicting the sex of the child,” a man tells Viserys, who says, “There’s a boy in the queen’s belly; I know it.”

Later, Sapochnik brilliantly cuts between adults’ and kids’ reactions to violence. As blood splatters during a violent tournament, a young girl clasps a boy’s arm in fear, only to cut to the adult Velaryons, who don’t even hold hands, having seen it all before. In fact, Rhaenys casually inspects her fingernails, while young Lady Hightower picks her nails bloody.

It’s a dynamic start for Sapochnik, who shows directorial chops in spite of R-rated excess that intercuts gory battles with bloody childbirth. Fans will remember his work from the Season 5 episodes “The Gift” and “Hardhome” and the Season 6 episodes “Battle of the Bastards” and “The Winds of Winter.” Of course, he won his Emmy for “Bastards.”

Will “House of the Dragon” return the franchise to its original glory days of critical acclaim and pop-culture dominance? Or will it continue to “drag on” after that frustrating final season that outpaced Martin’s novels, allowing TV writers to inexplicably turn the beloved Mother of Dragons into a heinous heel, while allowing the villain Cersei Lannister to live?

I personally knew the series was in trouble when it brought Jon Snow back to life in Season 6. The thrill of “Thrones” was that anyone could die at any moment, from Ned Stark’s beheading to the Red Wedding to Joffrey’s poisoning. To suddenly hit “undo” on a major character’s death was a cheap trick that diluted the series by lowering the stakes.

Here’s hoping the franchise learns its lessons and gets back to shocking (and permanent) deaths. As King Viserys tells Rhaenyra: “If we don’t mind our own histories, it will [doom] us,” a variation on “those who don’t know history are destined to repeat it.” Excited fans are already wagering over who will appear first, die first, and end up on the Iron Throne.

Below are the betting odds, according to SportsBetting.ag:

Who will be seen first in Episode 1?

Who will be seen first in Episode 1?

Who will sit on the Iron Throne at end of Season 1?

Who will be Hand of the King at end of Season 1?

Who will be first to perish during Season 1?

Who will perish first during Season 1?

Which dragons will be alive at end of Season 1?

Tune in Sunday night on HBO to see what happens! If the series original run is any indication, these names will be trending big time on social media on Sunday night.