A few months ago, when India restricted wheat exports following a heatwave, rumbles ran through the world’s food markets. Still, while India is a giant consumer of wheat, it’s not as big an exporter. The real fear was that New Delhi might cut off rice shipments as well: India is the world’s largest exporter by far.


Fortunately, rice prices in India hit a five-year low around then, depressed by ample global supply and a weak rupee. Things are very different today. First, Indian rice crops have been struck by a mystery “stunting” disease caused by a virus first observed in China in 2001. Even worse, rainfall in three major rice-producing states in the country’s north and east has been low or erratic.


There’s talk that Indian officials — worried about shrinking supplies and domestic inflation — are now considering restricting rice exports, too. A wholesale ban of the sort that New Delhi usually imposes would be a dire mistake — for the world and for Indian farmers.


The last time India blocked grain exports, in 2007 and 2008, the decision precipitated a years-long food-security crisis. Repeating that ban would be both irresponsible and unproductive. Irresponsible, because higher rice prices globally would hit developing nations — already struggling as the Ukraine war has driven up costs for food, fuel and fertilizer — when they can least afford it. An India that aspires to lead the developing world cannot deliberately harm those for whom it claims to speak.


Nor would an export ban lower inflation at home or meaningfully improve India’s food security. In August, the government had 28 million metric tons of rice in its warehouses (well above its mandated buffer stock of 11 metric tons), so we’re not running out any time soon. Meanwhile, the agricultural economists Ashok Gulati and Ritika Juneja have pointed out that inflation in India is mainly being driven by the prices of fuel and vegetables; rice prices accounted for than 2% of the rise in the consumer price index last month.


Moreover, export bans are not just bad for other poor countries; they’re bad for India’s own farmers, who are missing out on high prices overseas. While officials from New Delhi have often torpedoed consensus at global summits in the name of defending India’s millions of marginal farmers, their actions when it comes to agricultural trade policy show that they’re more concerned about urban food prices, not farm profits. Farmers in India are accustomed to a one-sided bet: They are exposed to the downside when global prices crater and don’t benefit when they rise, if the government blocks exports.


Some of the sustained criticism India received after the wheat export ban seemed designed to prevent a repeat of that mistake with rice. If so, it may have had some effect. The government seems to be focusing for now on limiting exports of “100% broken” rice, a low-quality grade often used for animal feed and exported especially to China. 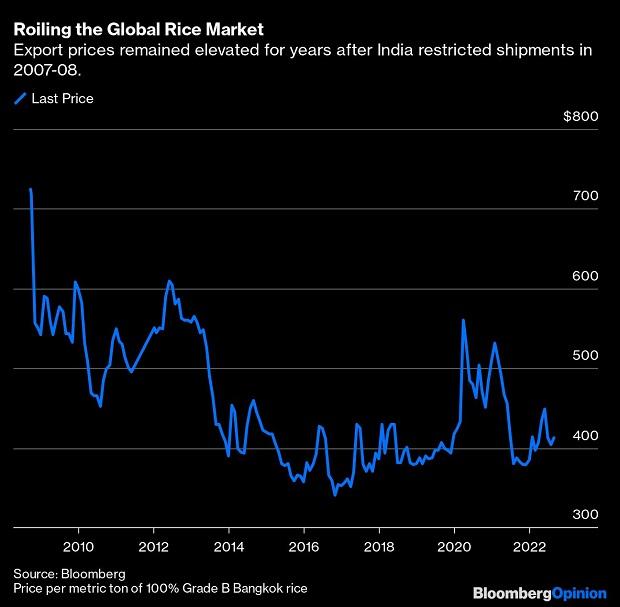 In that case, the main impact would be on margins for Chinese pig farmers. This isn’t a negligible concern: Low margins have already pushed many of them out of the business, causing China’s pig herd to shrink. That’s sent pork prices up by over 20%, driving overall consumer inflation in China to a two-year high.


But that’s nothing compared to the chaos that a full-scale rice ban would cause. If India shuts down exports, Vietnam and Thailand, the second- and third-largest exporters, might well do the same. Hopefully the Indian government will retain its newfound sense of responsibility until the current crisis is past.


It should also look closely, however, at what this rice crisis means for India’s agricultural sector. Simply put, while India may be the world’s rice bowl, it’s also remarkably unproductive.


Rice in particular still depends far too much upon the monsoon. West Bengal, Bihar and eastern Uttar Pradesh — the regions where rainfall and therefore rice production is below par — are also the same parts of the country that have failed to develop proper irrigation systems. As a result, farmers in those states struggle to produce consistent crops.


A lack of irrigation, together with poor agricultural practices, has resulted in yields that are stunningly low. According to the Food and Agriculture Organization, India’s paddy yield in 2020 was under four tons per hectare; it was nearly six tons a hectare in Vietnam. Even Bangladesh manages 4.8 tons a hectare, which is about the Asian average.


The biggest step that India could take for the world’s food security — and its own — would be to grow rice more efficiently. That’s where the government’s energies should be focused, not on making life more difficult for India’s friends and farmers.

Who Will Win The Match Between Sri Lanka And Bangladesh? Match 05