RICHARLISON labelled his Champions League debut as one of the best days of his life.

The Brazilian, who joined Tottenham from Everton for £60million in July, marked his bow with two late goals to help Spurs beat Marseille 2-0 on Wednesday night.

He was in tears at the final whistle as he hugged his father and mother in the crowd.

Richarlison, 25, said: “After hearing the anthem, I started to smile, it was my dream as a kid.

“Being there, listening to the anthem, playing the match, I got very emotional and I was rewarded after scoring these two goals with the help of my friends.

“The whole team helped me a lot. I’m very happy, it was one of the best days of my life with my father and family here. 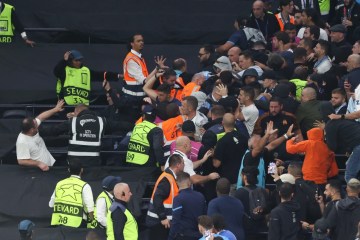 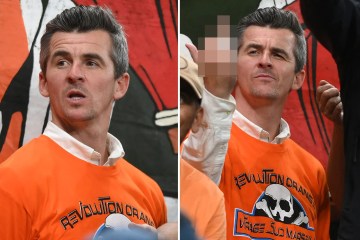 “My father was here, he has been with me through all my career. He helped me a lot to make my dreams come true.

“To have him here was very emotional for me because he’s a huge part of my success.”

Antonio Conte spoke of his happiness at seeing ‘Richy’ fare so well in this competition after the game.

The Italian is a huge fan of Richarlison, admiring his technical skills, his feistiness and his versatility.

And Richarlison is loving working under the former Chelsea boss who is pushing him to become a better player.

The ex-Watford striker added: “He always supports me and wants me to train harder.

“He’s always attentive all the time during the training sessions, he makes us work very hard to secure wins.”

Skipper Hugo Lloris has been hugely impressed with Richarlison since his arrival.

The former Toffee has four goal involvements this season, only one fewer than club best Harry Kane and three more than Son Heung-min.

Frenchman Lloris said: “I think he deserves these goals. They’re very important for him but also for the team.

“I think he’s making a lot of effort every day in training, every time he has the opportunity in a game and today he scored two great headers. Obviously he made the game easy for us.

“We used to face him and when you face an opponent you have no idea who they are, really.

“I think he settled very well into the team and as you can see he’s finding his place. That’s good because we need everyone ready for competition.

“He’s a competitor. You just have to see him in training sessions or every game that we play, he’s always there to compete.

“To put the defenders under stress and pressure. That’s why he was rewarded for all his work. And for sure a lot is coming for him.”

Now the focus switches for unbeaten Spurs to Manchester City away this Saturday evening.

Tottenham won 3-2 at the Etihad last season but this year Pep Guardiola’s side have Erling Haaland, which Lloris believes gives them a new dimension.

The stopper added: “We’ll prepare for the game as good as we can. We have one day less of recovery (than City) and that can make the difference, we know.

“We’re going to focus on recovery but then, yes, we know how they play.

“But also with the new signing Haaland they have another aspect in their game which they can use. We’re going to study the way they play and we’ll try our best to get something.”

“But we have nothing to lose. We know it’s going to be tough, but we have a great team and we go there to try to win.”

Rupee rises 23 paise to close at 79.72 vs dollar amid easing crude prices