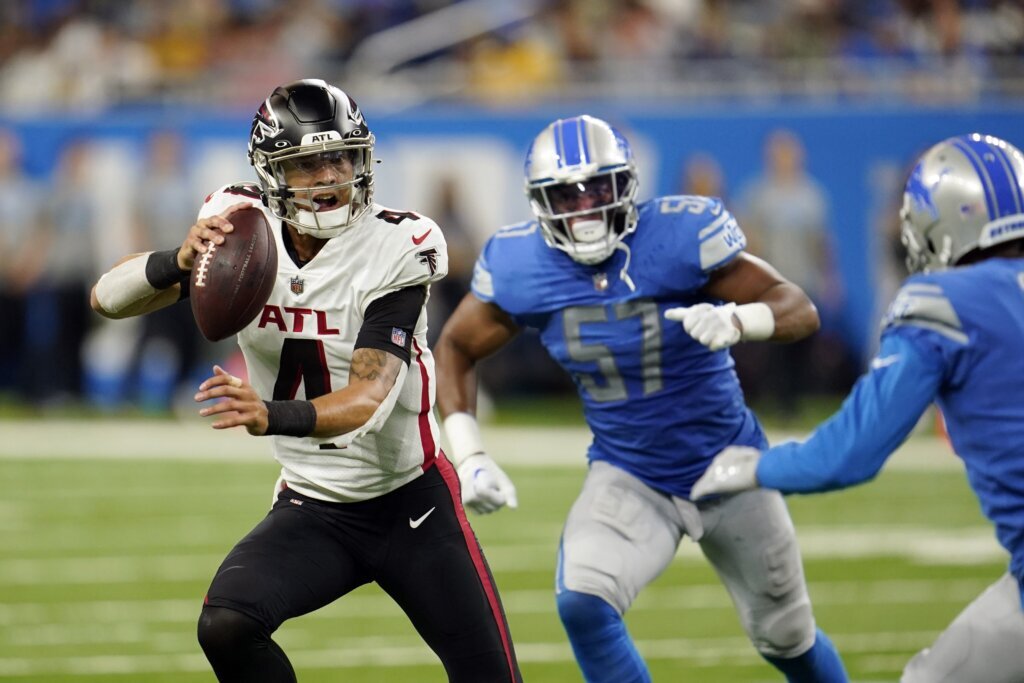 DETROIT (AP) — Rookie quarterback Desmond Ridder threw a 21-yard touchdown pass to Jared Bernhardt with 1:30 left to give the Atlanta Falcons a 27-23 win over the Detroit Lions on Friday.

The Lions took a 23-20 lead on Riley Patterson’s 28-yard field goal with 5:57 to play, then forced Atlanta into a three-and-out. Detroit quarterback David Blough, though, fumbled at his 33 with 2:00 left.

Ridder replaced Marcus Mariota after one drive and finished 10-for-22 for 103 yards and two touchdowns. He also rushed six times for 59 yards, as Atlanta put up 168 yards rushing and just 139 passing.

Lions quarterbacks Tim Boyle and Blough, competing for the No. 2 job behind Jared Goff, both struggled. Boyle was 9-for-16 for 111 yards, a touchdown and an interception. Blough was 18-for-28 for 141 yards, but had a pass deflected and nearly intercepted in his own end zone with 3:42 left before his late fumble.

Falcons: WR Drake London, the eighth overall pick in this spring’s draft, sustained a knee injury on the game’s first series and did not return.

Lions: S Will Harris left the game on the first series with a hand injury and didn’t return.

Defensive end Aidan Hutchinson was a familiar sight for Detroit football fans even before the Lions picked him with the No. 2 pick in April’s draft. Hutchinson was a star for Michigan last season in their first run to the College Football Playoff, and he made a quick impact in his NFL debut.

On his first two plays, he knocked Marcus Mariota out of bounds after a 7-yard gain, then stopped running back Qadree Ollison for a 2-yard loss on second down. Two plays later, he drew a holding penalty on Chris Lindstrom.

Both first-team offenses started the game with touchdown drives, taking up all but 31 seconds of the first quarter. D’Andre Swift scored after a 10-play Detroit drive and Mariota scrambled in from 6 yards to conclude a 12-play Falcons possession.