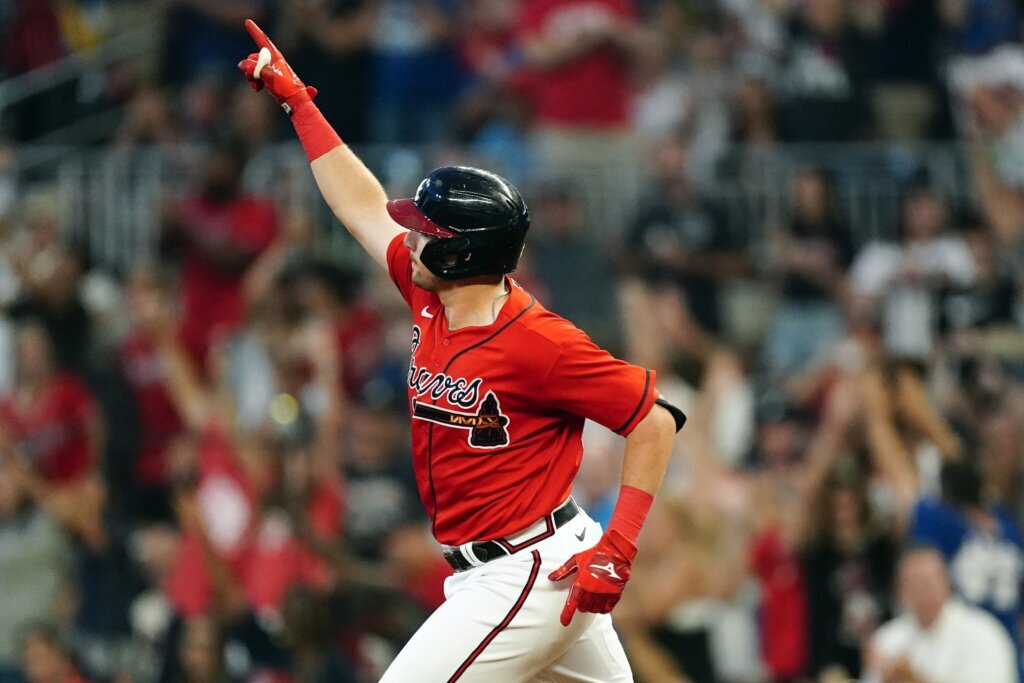 Houston left fielder Yordan Alvarez left the game in two outs in the bottom of the fifth. He reported feeling ill and was taken to a hospital for evaluation. Alvarez is second in the AL in homers with 31 and leads the league in on-base percentage.

Wright (15-5) was making his first start since Aug. 10 because of arm fatigue. He erased a one-out walk in the third on Jose Altuve’s double-play grounder and stranded Kyle Tucker, who tripled with two outs in the sixth, by retiring Trey Mancini on a comebacker. Wright allowed two runs and six hits with one walk and seven strikeouts in six innings.

After taking three of four this week from the NL East-leading New York Mets, the Braves took a 3-0 lead in the third when Riley hit his 31st homer an estimated 409 feet to right-center. Riley’s 67 extra-base hits lead the majors.

Houston, which was coming off a 21-5 victory at the Chicago White Sox, missed a chance at an inning-ending double play on Dansby Swanson’s single when second baseman Altuve couldn’t handle shortstop Jeremy Peña’s flip throw at second and the ball bounced away.

McCullers (1-1) allowed three runs and seven hits with three walks and six strikeouts in five innings. He was making his second start since missing last year’s ALCS and World Series and the first 119 games of this season with a right flexor tendon strain.

The Astros scored twice in the fifth to trim the lead to 3-2. Tucker hit his 22nd homer, a 445-foot shot to right-center. Wright gave up singles to Mancini and Chas McCormick before Altuve drove in Mancini with a single to left.

Phil Maton gave up a leadoff double to Michael Harris II in the sixth and walked Ronald Acuña Jr. before Swanson doubled off the wall in right-center to score both runners and make it 5-2. Matt Olson followed with a sacrifice fly.

Astros: Chas McCormick shifted to left when Alvarez departed, and Mauricio Dubon took over in center. … Dubon tried to stay in the game after crashing into the fence in right-center on Swanson’s double in the sixth. A trainer came out to see about Dubon, who soon left the game with left elbow discomfort. Jake Meyers took his place. … Manager Dusty Baker said the groin injury to INF Aledmys Díaz isn’t as bad as the team originally thought. Díaz was placed on the injured list on Wednesday.

Astros LHP Will Smith returned to his former ballpark and faced four batters in the seventh. Smith was dealt to Houston at the trade deadline for RHP Jake Odorizzi.

Though both teams are in playoff contention, there were several thousand empty seats at Truist Park. The Braves announced a crowd of 42,837 and their 30th sellout of the year.