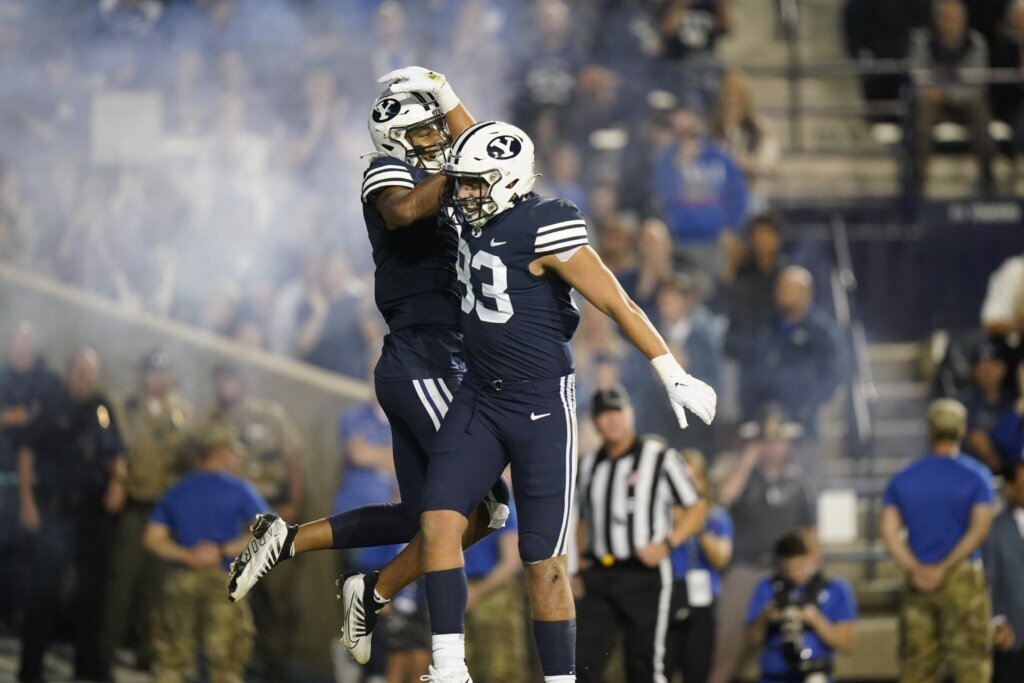 PROVO, Utah (AP) — An uncertain future awaits the longtime rivalry between BYU and Utah State. When the No. 19…

When the No. 19 Cougars host the Aggies in the Battle for the Old Wagon Wheel on Thursday night, it will mark the final scheduled game in the series. BYU opted out of four contracted games from 2023 to 2026 while clearing future schedules ahead of joining the Big 12 Conference next year. No plans are in place to continue the series in the immediate future.

This is a game players and coaches from both schools don’t want to go away.

“The Wagon Wheel is a cool thing. It’s always nice to take that home,” BYU receiver Brayden Cosper said. “So, yeah, it’s sad. Hopefully, it doesn’t come to an end.”

If the rivalry ends after this season, Utah State (1-3) wants to go out with a bang.

The Aggies see a win over BYU (3-1) as a potential springboard for reversing a sluggish start. They have dropped three straight games while scoring just 31 total points in that stretch.

“Everybody will remember the last one,” Aggies coach Blake Anderson said. “That’s great motivation for our guys to play their very best.”

Utah State has prevailed twice in three previous road games against BYU. Getting in the win column a third time will require finding a way to successfully defend junior quarterback Jaren Hall.

Hall put together one of the best performances of his career while leading the Cougars to a 38-24 victory over Wyoming last week. He threw for 337 yards and four touchdowns while completing a career-high 81.3% of his passes.

He has thrown for at least 250 yards in eight consecutive games and 10 of his last 11.

“He knew his time would come and he would have an opportunity to earn the spot,” BYU coach Kalani Sitake said. “He did it and look what’s happening now. You look at the things that he does naturally. That’s a young man that doesn’t take anything for granted.”

One month into the season, no player has emerged as BYU’s lead running back.

Chris Brooks gashed South Florida for 135 yards in the season opener but his production declined sharply against Baylor and Oregon. Brooks only had two carries for 10 yards and a touchdown against Wyoming. Miles Davis assumed primary ball carrier duties against the Cowboys and responded with a career-high 131 yards on 13 carries.

Davis, Brooks, and Lopini Katoa are listed as co-starters atop the depth chart this week.

“I have a lot of confidence in all three of them,” Sitake said. “This is a good opportunity to see who can step up and make big plays for us.”

Holding on to the football has been a challenge for Utah State. Through four games, the Aggies have committed 12 turnovers. Only two FBS teams – Louisiana Tech and New Mexico State – have committed a higher number of turnovers this season. Utah State ranks last in the Mountain West Conference with a minus-5 turnover margin.

The Aggies had six turnovers in their 34-24 loss to UNLV, including five interceptions by senior quarterback Logan Bonner.

The Aggies have tallied 11 penalties in their three losses while averaging 101.3 penalty yards. Anderson said his players have fallen into a trap of letting emotions cloud their judgement in critical moments.

“We got to show more composure,” Anderson said. “We can’t cross that line and start having emotional-type penalties and frustration-type penalties.”

BYU tallied a season-high 11 penalties for 109 yards against Wyoming. A series of penalties extended an eventual fourth-quarter touchdown drive for the Cowboys and left the Cougars feeling frustrated about their defensive progress.

BYU and Utah State will battle for possession of a large wheel from a covered wagon. The traveling trophy was introduced to the series in 1948. The Cougars, who currently possess the trophy, have a 42-25 record in the series since the Old Wagon Wheel was introduced.