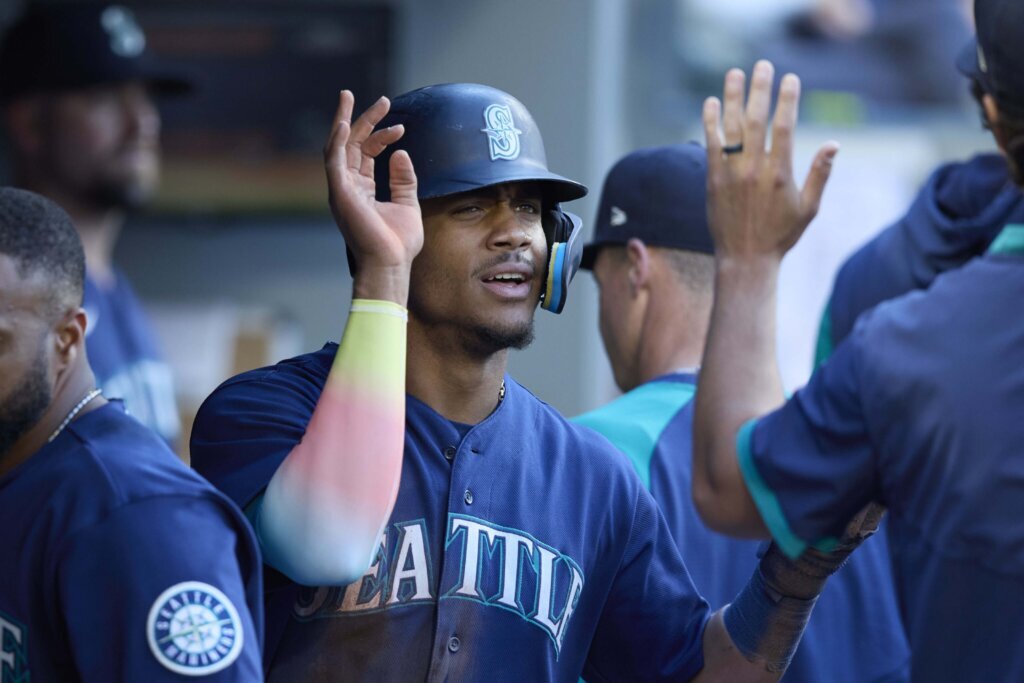 SEATTLE (AP) — Julio Rodríguez homered for the second day in a row, Cal Raleigh had a two-run triple in…

SEATTLE (AP) — Julio Rodríguez homered for the second day in a row, Cal Raleigh had a two-run triple in the fifth inning and the Seattle Mariners beat the Oakland Athletics 8-6 Thursday night.

Seattle has won 17 of 19 games against Oakland and earned its third straight victory overall to improve to 37-41. Seattle has also won 8 of 10.

“A good way to start the series,” Seattle manager Scott Servais said. “Need to keep it rolling. We’re not used to giving up six runs and winning.”

Oakland finished the month of June with the worst record in baseball at 5-21.

The A’s recalled Adrian Martinez from Triple-A Las Vegas for his second career start, and he allowed seven runs and seven hits over 4 2/3 innings.

“Overall I thought he threw strikes, you know, it was just one pitch away from getting out of that fifth inning,” Athletics manager Mark Kotsay said.

Rodríguez tagged his 13th homer of the season and seventh in June. His solo shot over the center-field wall put the Mariners up 2-1 in the third. He sent one to the upper deck of T-Mobile Park on Wednesday.

The AL Rookie of the Month for May is making a case for another nod in June. He batted .280 with 16 RBIs and 22 runs.

After Abraham Toro regained Seattle’s lead 5-4 with a two-out single to left field, Raleigh followed with a two-run triple into deep center field off the glove of Skye Bolt. The throw to third base ricocheted off Sheldon Neuse’s mitt, and Raleigh scored to give Seattle an 8-4 cushion.

It was Raleigh’s first career triple. He also doubled down the right-field line in the eighth.

“It was just a cool moment,” Raleigh said. “It honestly felt like I was playing Little League again.”

Oakland’s Ramón Laureano belted two home runs, a three-run opposite field blast to right to even the game at 4 in the fifth inning and then another in the ninth to trim the Mariners’ lead to 8-6.

“Opposite-field homers are really impressive and he had two of them tonight,” Kotsay said.

Seattle starter Logan Gilbert (9-3) didn’t have his best performance over six innings. His four runs allowed were the most he’s given up since May 11. He surrendered two home runs, including one to veteran Elvis Andrus in the third.

Dylan Moore hit a 414-foot, two-run homer into the left field stands to give the Mariners a 4-1 lead in the fourth.

Despite giving up the solo homer to Laureano, Seattle closer Paul Sewald notched his eighth save of the season.

Mariners shortstop J.P. Crawford began a four-game suspension after his involvement in a benches-clearing brawl with the Los Angeles Angels on Sunday.

Crawford was one of the three Mariners who appealed their suspensions from Major League Baseball, along with outfielders Jesse Winker (seven games) and Rodriguez (two games). Crawford had his reduced from five games to four. Decisions haven’t been announced for Winker and Rodriguez.

“Certainly, unfortunate for us. Everybody knows what he does leading off and playing shortstop,” Servais said. “But we will abide by the rules and the rulings that are out there.”

Seattle first baseman Ty France is a finalist for the All-Star Game at his position along with Toronto’s Vladimir Guerrero Jr. Both advance to the final round of the MLB All-Star Ballot, with the second phase of voting beginning noon ET on July 5.

Oakland OF Cristian Pache and RHP Adam Oller were both optioned to Triple-A Las Vegas; RHP Martínez was recalled from Las Vegas, INF Vimael Machín was selected from Las Vegas and OF Bolt was reinstated from the 60-day IL; INF Jed Lowrie was placed on the 10-day IL; LHP Adam Kolarek was designated for assignment.

Mariners: OF Kyle Lewis (concussion) is making progress in his return and is “very close” to beginning his rehab assignment, according to Servais. … C Tom Murphy had shoulder surgery yesterday in Texas.

Mariners: LHP Marco Gonzales (4-8, 3.31) will make his 16th start Friday night. He’s pitched at least six innings in his last three starts and surrendered only five runs in that span.

Athletics: Oakland will start RHP James Kaprielian (0-5, 5.88) on Friday. He took a no-decision on June 26 after pitching five innings and allowing three runs on two hits.