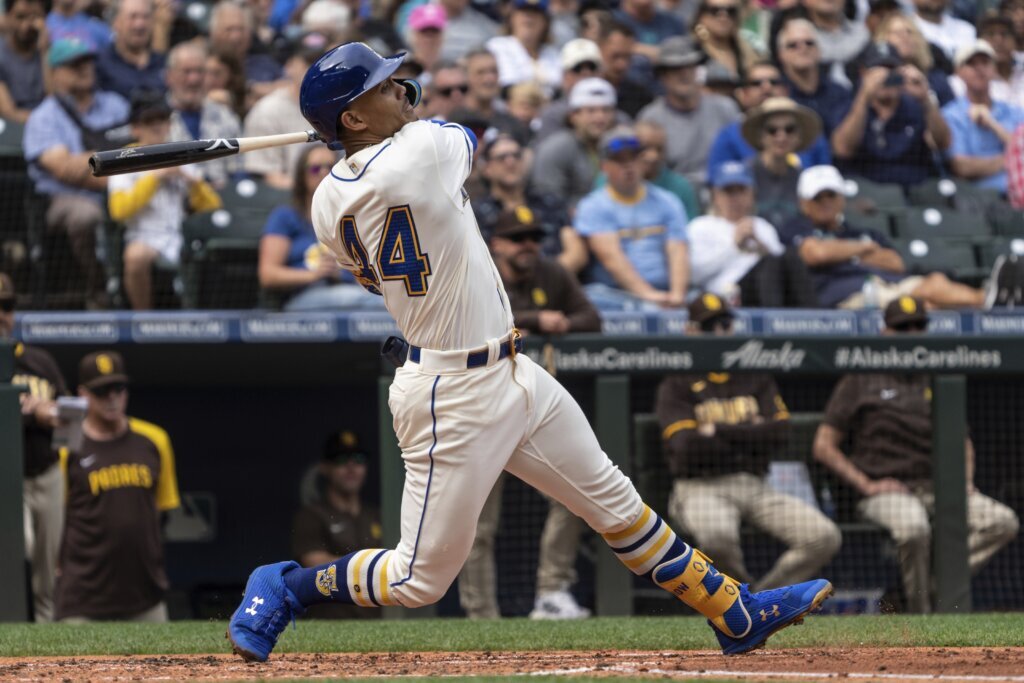 SEATTLE (AP) — Julio Rodríguez continued to strengthen his rookie of the year campaign with his fourth leadoff home run of the season, Eugenio Suárez and Carlos Santana both added homers, and the Seattle Mariners beat the San Diego Padres 6-1 on Wednesday.

Seattle rebounded quickly from being shut out for the first time in nearly three months and split the brief two-game set. Rodríguez hit the first pitch thrown by San Diego starter Mike Clevinger 385 feet into the left-field bullpen for his 26th home run of the season.

Rodríguez later nabbed his 25th stolen base of the season, making him the third rookie in league history to have at least 25 steals and 25 homers in their first season. But unlike Chris Young in 2007 and Mike Trout in 2012, Rodriguez reached the 25/25 plateau in his debut season. Both Young and Trout reached in the majors late in the previous season, but were still considered rookies.

Suárez’s homer was his 31st of the season, the second most in franchise history by a third baseman. His two-run shot in the first inning gave Seattle a 3-0 lead. Suárez has 15 homers since Aug. 1.

Santana then provided some separate with a three-run homer in the fifth inning after Clevinger (5-7) hit Rodriguez and Ty France with pitches to open the inning. Santana’s homer was his 15th.

Seattle kept pace with Toronto and Tampa Bay in the crowded race for the top wild-card spot in the AL. The Padres hold the third and final NL wild-card slot.

The three homers were plenty of offensive support for Luis Castillo, who continues to thrive since being acquired from Cincinnati ahead of the trade deadline. Castillo (7-5) threw six shutout innings, scattering four hits and striking out nine.

San Diego put a runner in scoring position in three of the first four innings against Castillo but couldn’t come through with a key hit. The Padres went 18 straight at-bats without a hit with runners in scoring position over three games before Jorge Alfaro’s RBI double in the seventh inning scored Wil Myers.

Clevinger allowed three home runs in a game for the first time in his career, and lost for the third time in his last four decisions. The six earned runs allowed was also a season high.

Mariners: RF Mitch Haniger’s sore lower back was feeling better but not well enough to be in the lineup on Wednesday. Manager Scott Servais said he would be re-evaluated ahead of Friday’s series opener against the Angels. … IF/OF Dylan Moore (oblique) felt good after taking batting practice and Servais remained optimistic Moore could be activated during the upcoming road trip.

Padres: San Diego opens a four-game series in Arizona on Thursday. LHP Sean Manaea (7-8, 5.23) will make his first start since Sept. 3 when he gave up eight runs in 4 1/3 innings against the Dodgers. Manaea has just one victory since July 31.

Mariners: After an off day, Seattle opens a 10-game road trip against the Los Angeles Angels on Friday. LHP Robbie Ray (12-9, 3.56) is scheduled to start the opener. Ray has won four of his past five starts, but lost his last time out to Atlanta after giving up four runs in five innings.