SOUTHAMPTON are leading the chase to sign free agent Ross Barkley, according to reports.

The former England international was released by Chelsea earlier this week.

And it appears he could be set to stay in the Premier League with Southampton planning to offer him a deal, report the Daily Mail.

Ralph Hasenhuttl is reportedly keen to add midfield cover following the injury to Romeo Lavia in the 2-1 win over Chelsea on Tuesday.

But the Saints could have to fight off interest from Rangers to sign Barkley, according to Alan Nixon. 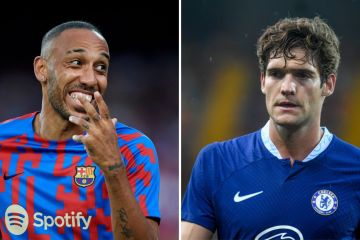 The Gers would be able to offer the star Champions League football and regular game time – something he has lacked in recent years.

In fact, Barkley made just 100 appearances for the Blues after signing for £15million from Everton in 2017.

He joined Aston Villa on loan for the 2020-21 campaign but contributed just three goals in 24 games.

And after featuring just six times in the Prem last season Chelsea decided to get rid.

Chelsea are set for a busy deadline day which could see Marcos Alonso leave for Barcelona, with Pierre-Emerick Aubameyang to arrive in exchange.

Chelsea are also looking to bolster their midfield with the addition of Edson Alvarez, who has gone on strike at Ajax in a bid to push through a move.