The rupee settled just shy of the 79-mark against the US dollar on Wednesday as a fall in domestic equities amid unceasing overseas investment outflows soured sentiment towards the domestic currency, dealers said.


The Indian currency settled at a fresh low of 78.97 versus the greenback, 0.3 per cent weaker than the previous close. In the course of trade, it hit a lifetime intraday low of 78.98 per US dollar. On Tuesday, the local currency had closed at 78.77. 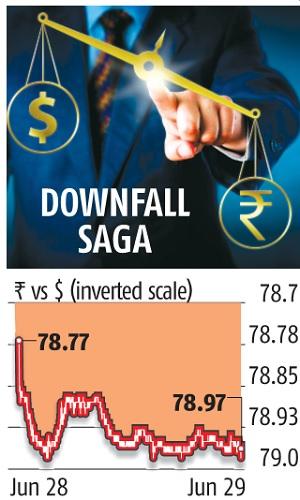 Dealers said though the Reserve Bank of India intervened on Wednesday to limit volatility in the currency market, the magnitude of such interventions by the central bank, of late, has declined in the face of fundamental headwinds for the rupee. The RBI is said to have sold dollars at 78.97-78.98 per US dollar on Wednesday.


The rupee started the day on a weak footing as the domestic equity markets notched up losses. Pessimism in view of high inflation and rate hikes in the US, which dragged down key indices on Wall Street, spilled over to Asian equities.


The BSE Sensex and the NSE Nifty each settled 0.3 per cent lower than the previous close. Foreign institutional investors have net sold $6.3 billion worth of Indian stocks, so far, in June, National Securities Depository data showed.


It is the biggest monthly FII outflow from India stocks since March 2020, the month during which the first lockdowns were imposed to curb the spread of Covid-19.


In 2022, so far, foreign investors have pulled out $28.4 billion from equities, far outstripping the $11.8-billion sell-off seen during the Global Financial Crisis of 2008. The rupee has depreciated 5.9 per cent versus the dollar this calendar year.


The analyst said the rupee may weaken to 79.10 per dollar in the coming days. If the rupee were to strengthen over the near term, it would likely not rise beyond 78.38, he said.


The price of the Brent crude contract has risen over 2 per cent over the last couple of days after the UAE ruled out additional supplies. Given that India imports more than 80 per cent of its oil needs, this does not bode well for the current account deficit and therefore the rupee, analysts said.


Moreover, the US Fed, which has hiked rates by 150 basis points, so far, in 2022, is widely expected to raise rates by 50-75 bps more at its policy in June. Higher US interest rates dim the appeal of assets in riskier emerging markets.


“The RBI today intervened around 78.97-78.98/$1 but the magnitude of the intervention over the last couple of days has gone down,” a dealer with a state-owned bank said.


“The RBI wants to prevent the excessive volatility and the speculation but it does not want to risk the rupee being too overvalued against EM peers when global factors, such as crude and US rates, warrant a depreciation,” he said. 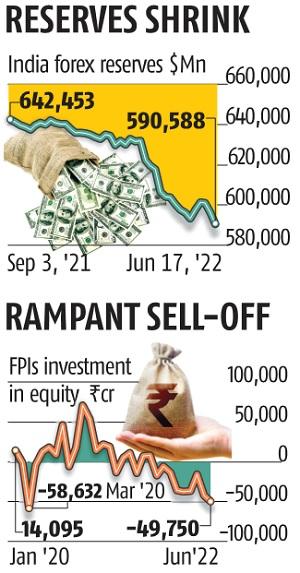 Review, GMP, valuations: Should you subscribe to Electronics Mart…