Ruud still chasing US Open title, No. 1; Jabeur into semis 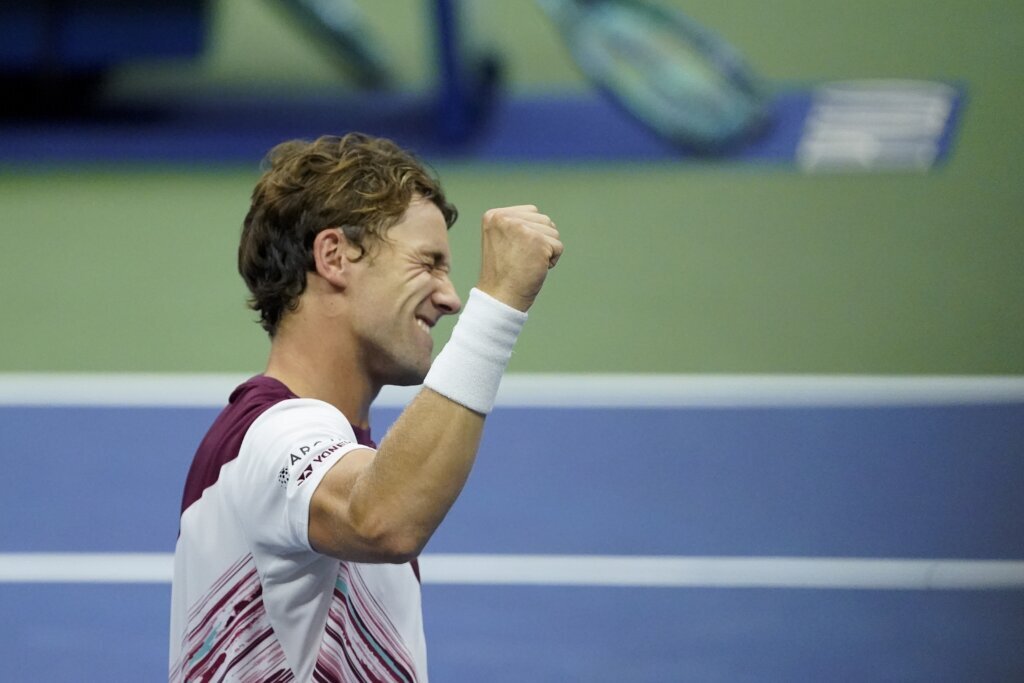 NEW YORK (AP) — Casper Ruud headed into the 2022 season with just one Grand Slam appearance that lasted as far as the fourth round anywhere and was determined to improve his record at the four most important events in tennis.

Then, a day before the Australian Open began in January, he twisted his ankle in practice and needed to withdraw. Hardly ideal. Just look at him now: Ruud is into the semifinals at the U.S. Open and has a shot at moving up to No. 1 in the ATP rankings, following a run to the final at the French Open.

The 23-year-old from Norway, who is coached by his father, former professional player, Christian, parlayed what he called “a better start than I ever had before in a match” to a 6-1, 6-4, 7-6 (4) victory over 2021 Wimbledon runner-up Matteo Berrettini in the quarterfinals under a closed roof at Arthur Ashe Stadium on a rainy Monday.

“During Paris, something clicked, and I feel like I, this year, have sort of figured out the better way how to play five sets and knowing that it’s very different from playing best-of-three sets. … Sometimes realizing, or knowing, that you can sort of let one set go every once in a while to save some energy for the rest of the sets,” the No. 5-seeded Ruud said. “So I think I matured and learned how to play five sets better than I did last year.”

He improved to 12-2 in Grand Slam competition in 2022 after making just two unforced errors in the first set, 11 fewer than No. 13 Berrettini.

“Everything sort of went (in) my favor,” Ruud said. “I was hitting all the spots, all the shots that I needed to.”

Ruud now will face the winner of the quarterfinal scheduled for Tuesday night between Wimbledon finalist Nick Kyrgios — who eliminated defending champion Daniil Medvedev in the fourth round — and No. 27 Karen Khachanov.

That was to follow the women’s quarterfinal between 18-year-old American Coco Gauff, the runner-up at Roland Garros, and 28-year-old Frenchwoman Caroline Garcia.

The Gauff-Garcia winner will meet Wimbledon runner-up Ons Jabeur of Tunisia in the semifinals. Jabeur advanced to her first semifinal in New York with a 6-4, 7-6 (4) victory over the player who beat Serena Williams in the third round, Ajla Tomljanovic.

Jabeur is the first woman representing an African nation to get to the final four of the U.S. Open during the professional era, which began in 1968.

“Just trying to do my job and hopefully I inspire more and more generations from Africa,” Jabeur said. “It really means a lot to me.”

She said her run to the title match at the All England Club allowed her to “believe more in myself” and realize, “I had it in me that I can win a Grand Slam.”

As for chucking her racket during the match against Tomljanovic, Jabeur joked sheepishly that the equipment “kept slipping away from my hand.”

With Medevev gone, he will drop from No. 1 in the men’s rankings on Monday, and three players have a shot at replacing him: Ruud, Rafael Nadal ( who lost in the fourth round to Frances Tiafoe on Monday ) and No. 3 Carlos Alcaraz (who plays Jannik Sinner in the quarterfinals Wednesday).

“It’s still far away, I think, but of course it’s nice that it’s possible. And Casper has a little bit of motivation with that in mind,” Christian Ruud said, “because even when he was small, his ultimate goal was to be No. 1 in the world.”

Explained: How have India’s crude import sources changed over time?