He is also accused of attacking her sister Emma Greville on the same date.

Giggs is due to stand trial at Minshull Street Court, beginning today.

The case will then move to Manchester Crown Court, which is closed for asbestos testing, for the remainder of the case.

He was meant to go on trial in January but the case was adjourned due to a backlog of cases following the pandemic. 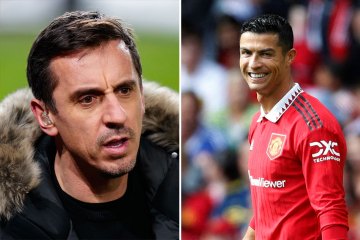 He has also pleaded not guilty to the common assault by beating of Emma Greville on November 1.

Giggs is on conditional bail and must not contact Kate or Emma Greville, or go to any address where they are.

Police were called to his mansion at 10.05pm on November 1 last year following reports of a disturbance.

He was arrested and later bailed pending further inquiries.

Kate met Giggs when she was working on PR for his Hotel Football business venture, opposite Man U’s Old Trafford stadium.

In April 2018 she was appointed head of PR and communications for GG Hospitality, the hospitality management firm co-owned by Giggs and former United team-mate Gary Neville.

She was involved in the launch of their Stock Exchange Hotel in Manchester city centre before she took up a new PR consultancy post last July with a former employer.

He is also a co-owner of League Two side Salford City.

Giggs has denied the allegations and previously issued a statement in which he said he would “look forward to clearing my name”.

He stepped down as Wales manager last month after going on leave when he was charged in November 2020.

The footballer said he did not want the country’s preparations for this year’s World Cup in Qatar to be “affected, destabilised or jeopardised in any way by the continued interest around this case”.

India at 75: How was August 15 chosen as India’s Independence Day?