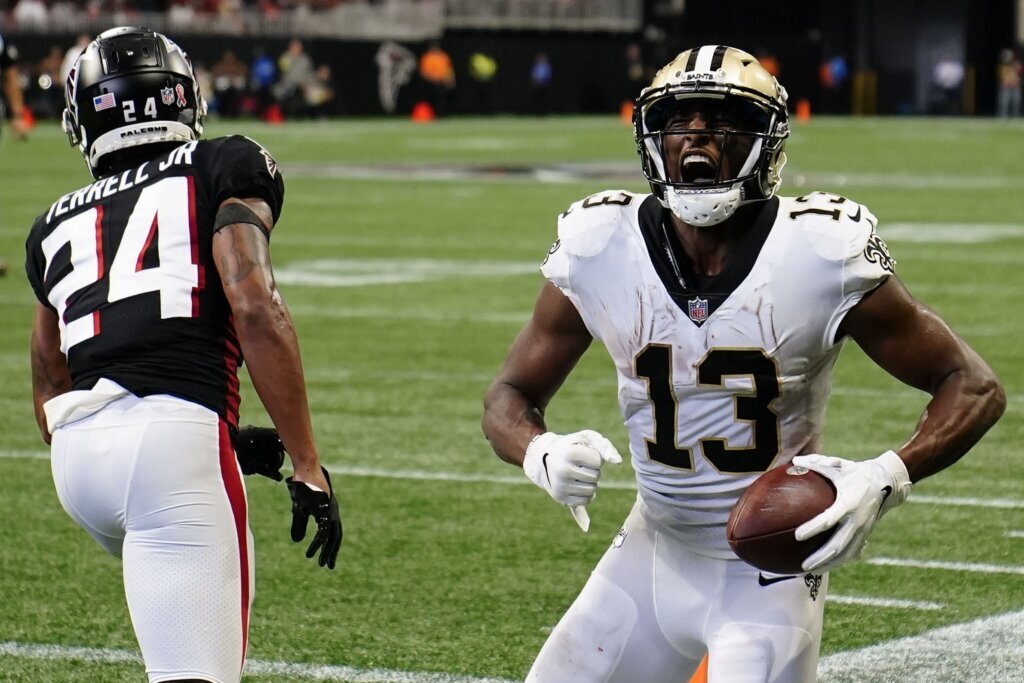 ATLANTA (AP) — A new coach. A bunch of guys coming back from injuries. A 16-point deficit in the fourth…

ATLANTA (AP) — A new coach. A bunch of guys coming back from injuries. A 16-point deficit in the fourth quarter.

None of it flustered the New Orleans Saints, who pulled off a stunning comeback Sunday.

“It was exciting,” Winston said with a smile. “We’ve just got to find a way to get there quicker.”

After struggling offensively through most of the season opener, the Saints finally found their rhythm.

Winston threw for 269 yards after going down last season on Halloween with a knee injury. Michael Thomas hauled in a pair of fourth-quarter TD passes in his first game since the 2020 season, having missed an entire campaign with complications from an ankle injury.

And Lutz delivered at the end, showing he’s fully recovered from a core issue that kept him out for all of 2021.

“I’m happy with our resilience,” Winston said. “We never gave up.”

Winston hooked up with Thomas on touchdown passes of 3 and 9 yards. The Saints converted one 2-point try, but failed on the other, leaving the Falcons clinging to a 26-24 lead.

New Orleans got the ball back one more time, taking over at its own 20 with 48 seconds remaining and no timeouts.

Winston connected on a 40-yard pass to Jarvis Landry and a 17-yarder to Juwan Johnson to set up Lutz’s winning field goal.

A personal foul on the Saints gave the Falcons a chance to pull out the victory, but Younghoe Koo’s 63-yard field goal attempt was blocked as the clock ran out.

It was a stirring start to the Allen era.

Sean Payton, who coached the team for 15 years and led New Orleans to its lone Super Bowl title, surprisingly stepped down after last season.

His defensive coordinator got the job, even though Allen’s first head coaching stint resulted in a record of 8-28 with the Raiders in 2012-14.

“I hope they’re not all like that,” Allen said. “Look, our team is tough and gritty. That’s what I love about ’em. That’s exactly the way they played in this game. It wasn’t perfect. We’ve got a ton of things to clean up.”

The Falcons, who have seemingly never recovered from squandering a 28-3 lead in the 2017 Super Bowl, added another meltdown to their resume in their first game of the post-Matt Ryan era.

Cordarrelle Patterson rushed for a career-high 120 yards, including a 5-yard scoring burst, and Marcus Mariota made his first start since 2019 as Ryan’s replacement.

Mariota threw for 215 yards and added 72 on the ground, highlight by a 2-yard touchdown run.

But in the end, the Falcons let what seemed like a sure victory get away.

“You guys wrote our obituary back in May and you’ll continue to write our obituary,” second-year coach Arthur Smith grumbled to reporters. “Who cares? We’ve got 16 games to learn from this and get better.”

Winston was sacked four times by a team that had a league-low 18 sacks a year ago. He passed for just 24 yards in the first half, but made all the throws when it really counted.

Landry had seven catches for 114 yards, and Thomas finished with five catches for 57 yards.

“It was a blessing to be back out there with the guys,” said Thomas, who had an NFL-record 149 receptions in 2019 but was playing just his eighth game since then.

Lutz was kicking himself after his first field goal attempt from 44 yards hit the left upright.

He bounced back to make a 49-yarder before connecting on the game-winner.

“Obviously, coming off a miss is tough,” Lutz said. “But that’s what we signed up to do. I’m grateful the defense gave me a chance to get back out there and the offense put me in position to make the kick. It feels really good.”

One bright spot for the Falcons was their pass rush.

The four sacks was the most by Atlanta since its next-to-last contest of the 2020 season at Kansas City. The Falcons had an NFL-low 18 sacks a year ago, never managing more than three in a game.

Grady Jarrett was credited with 1 1/2 sacks, teaming with Lorenzo Carter on one of them. Mykal Walker and Arnold Ebiketie also had sacks.

Both teams got plenty of production from their first-round rookie receivers.

Drake London, the No. 8 overall selection, led the Falcons with five catches for 74 yards.

Chris Olave, the No. 11 choice by the Saints, had three receptions for 41 yards and hauled in another catch on New Orleans’ successful 2-point conversion.

Atlanta RB Damien Williams sustained a rib injury in the first quarter, forcing Patterson to take on the bulk of the running load. The Falcons activated only one other back, Avery Williams, choosing not to play rookie Tyler Allgeier.

Saints: Home opener next Sunday against Tom Brady and the Tampa Bay Buccaneers.