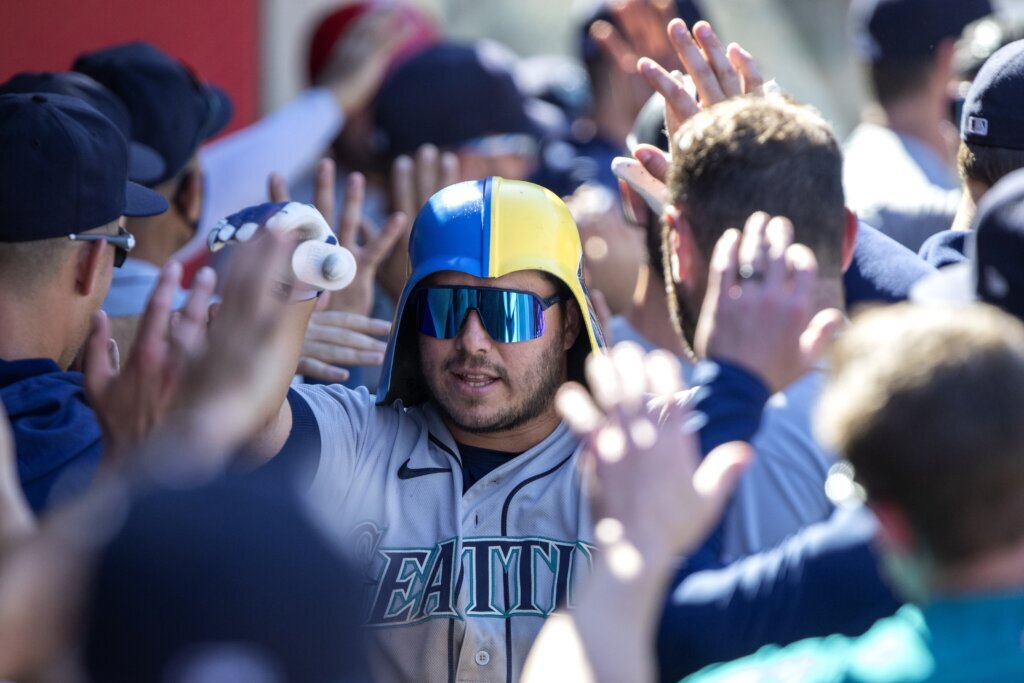 ANAHEIM, Calif. (AP) — Carlos Santana homered twice, including his first grand slam in three years, Ty France drove in four runs and the Seattle Mariners stopped a three-game losing streak with a 9-1 victory over the Los Angeles Angels on Monday.

Santana had the 15th multi-homer game of his 13-year career and fourth this season. He has seven homers in his last nine games and has hit 15 of his 19 home runs this season since Seattle acquired him from Kansas City in late June.

Logan Gilbert struck out a career-high, allowing one run and four hits in six innings and helping prevent the Mariners from being swept in a four-game series at Angel Stadium for the first time in 10 years.

Shohei Ohtani had two hits and scored in the sixth inning. The reigning AL MVP has hit safely in his last five games and is 6 for 17 during that span. Mike Trout was not in the lineup due to a planned rest day.

Seattle took a 5-0 lead in the fifth inning on Santana’s fifth career grand slam. He drove a 91.5 mile fastball from José Suarez 420 feet beyond the bullpens and into the stands in left-center.

France’s double down the left-field line drove in J.P. Crawford to put the Mariners up 1-0 in the first. France hit a three-run homer off Zack Weiss to make it 8-1 in the seventh.

Los Angeles had a 10-9 edge over the Mariners in 2022 and won the season series three of the last four years.

Mariners: CF Julio Rodríguez (back) took at least 30 swings off a batting tee before the game and could return to the lineup Tuesday. … C Cal Raleigh remained out as he deals with pain in his left thumb.

Angels: Interim manager Phil Nevin said his plan is for Trout to play all but one of the remaining 15 games in center field, with the other appearance likely as the designated hitter.

Mariners: Continue their 10-game trip with three in Oakland. RHP Luis Castillo (7-5, 2.68) is 3-1 in nine starts since being acquired from Cincinnati at the trade deadline.

Angels: Head on the road for six games beginning Tuesday against Texas. LHP Patrick Sandoval (5-9, 2.99 ERA) is 0-2 in five games vs. the Rangers.

Queen’s legacy in horse racing will last for years to come, says her trusted trainer as nation says final goodbye