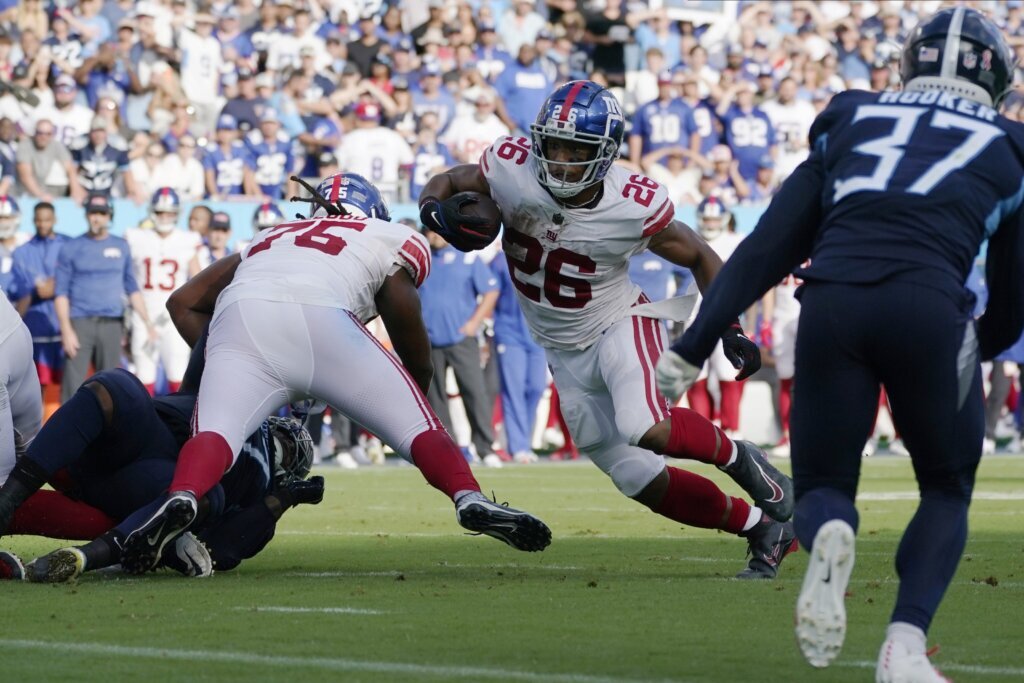 EAST RUTHERFORD, N.J. (AP) — The only thing that seemingly matters to Saquon Barkley entering his fifth season with the…

EAST RUTHERFORD, N.J. (AP) — The only thing that seemingly matters to Saquon Barkley entering his fifth season with the New York Giants is winning.

The No. 2 overall pick in the 2018 draft seemingly didn’t care he was selected as the NFC Offensive Player of the week after a win over Tennessee, or that he leads the NFL in rushing (164 yards) or total yards from scrimmage (194) after Week 1.

After four straight losing seasons — the Giants have had five in a row — Barkley had the rare feeling of seeing New York edge the Titans 21-20 for his first NFL season-opening win. He scored a touchdown and caught a 2-point shovel pass from Daniel Jones for the game-winning points with 66 seconds to play.

Barkley isn’t concentrating on repeating his performance or even bettering it on Sunday when the Giants open at home against the Carolina Panthers.

“I’m just coming into work,” Barkley said Wednesday after practice. “That’s the only thing I can do. I already went back, watched film, wrote my notes.”

Barkley was critical of himself for allowing a ball to be knocked out of his hands after a 33-yard run to the Titans 26 on the game-winning, fourth-quarter drive. The ball went out of bounds at the 11, giving the Giants possession at the point of the fumble.

Barkley, who missed almost all of the 2020 season with an ACL injury and was limited to 593 yards last season, felt he left yards on the field. His long run last season was 41 yards. He had a 68-yarder against the Titans where he was clocked running nearly 21 mph.

“So that’s my focus, just coming in see what I can do better and when the game comes execute the plays that I’m able to execute in,” he said. “Every game might not be a 194-yard performance, but whatever I can do to help the team win, that’s what I want to be able to do.”

There are many who expect the Giants to have another big game on the ground. New York ran for a league-high 238 yards Sunday and the Panthers allowed Cleveland to gain 217 rushing.

Carolina missed 18 tackles overall, resulting in 190 yards after contact in its 26-24 loss to the Browns on a late 58-yard field goal.

“I have played against him a few times over the years in Washington so I would like to think I know what I’m up against,” Ioannidis said. “He’s obviously a talented back. And every team has one. So I think this is a good opportunity for our defense to go out there and shut down the run and set the tone for what the next 16 games can look like for us.”

NOTES: Second-year WR Kadarius Toney, New York’s first-round pick last year, only got seven snaps in the opener after missing much of training camp with injuries. He said he is ready and can only do what the coaches want. “I wake up ready,” he said. “(There is) never really a point to where I’m not ready. Whether I’m over here laughing or playing, doing whatever I do — at the end of the day it’s always a locked-in mindset.” … DBs Nick McCloud (hamstring) and Aaron Robinson (appendicitis) and WR Wan’Dale Robinson (knee) didn’t practice Wednesday. C Jon Feliciano (leg), LBs Azeez Ojulari (calf) and Kayvon Thibodeaux (knee) and DB Jason Pinnock (shoulder) were limited. … Rookie S Dane Belton (clavicle) practiced full for the first time since being hurt in training camp.