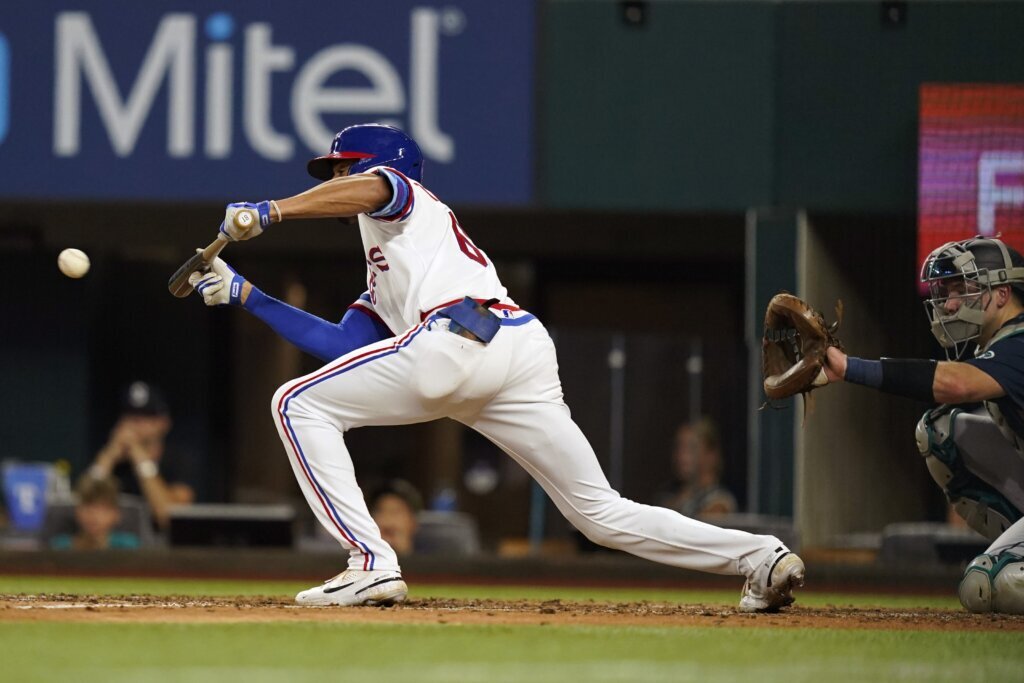 ARLINGTON, Texas (AP) — Corey Seager matched a career high with his 26th homer and rookie Bubba Thompson drove in a run with a sacrifice squeeze bunt as the Texas Rangers overcame an early deficit to beat the Seattle Mariners 7-4 on Saturday night.

Texas trailed 3-0 before a four-run outburst in the fourth inning against Marco Gonzalez (7-12). That was capped by Thompson’s bunt pushed to the right side as Charlie Culberson crossed home plate.

Eugenio Suárez homered and had a sac fly for the Mariners, who had won nine games in a row against the Rangers. Seattle, which has lost only 14 of its last 47 games overall since mid-June, dropped a half-game behind Toronto for the American League’s top wild card.

Seager, in the first season of his $325 million, 10-year contract with Texas, went deep in the fifth with a solo shot pulled down the right-field line that made it 5-3. He had 26 homers for the Los Angeles Dodgers in 2016, when he was the National League rookie of the year in his first full season.

Brett Martin (1-7) got the win after facing only one batter. The left-hander got an inning-ending double play grounder in the fifth after replacing Dane Dunning. Hard-throwing right-hander Jonathan Hernandez worked a perfect ninth for his third save in three chances.

Seattle opened the game with consecutive singles off Dunning, and led 2-0 after a wild pitch and a sac fly by Suárez. Cal Raleigh had a leadoff double in the second and scored on a sac fly by Sam Haggerty.

Gonzales gave up five runs and nine hits over five innings. The lefty struck out two and walked two in his fifth start against Texas this season.

Adolis Garcia stretched his hitting streak to 10 games with a double in the Texas fourth and scored when Jonah Heim followed with a double. Culberson and Ezequiel Durán had back-to-back RBI singles before Thompson’s bunt.

Former Rangers second baseman Ian Kinsler and longtime communications director John Blake were inducted into the team’s Hall of Fame during a pregame ceremony. … Mitch Haniger has hit safely in all seven games for Seattle since being reinstated from the 60-day injured list on Aug. 7. He is hitting .423 (11 of 26) in that span, and has a 10-game hitting streak overall. … Rangers 1B Nathaniel Lowe had two singles and has reached base safely via a hit or a walk in 19 consecutive games. That is the longest streak by a Texas player this season.

Mariners: OF Taylor Trammell was reinstated from the 10-day injured list and optioned to Triple-A Tacoma. Trammell hit .235 with three homers and nine RBIs over 32 games before going on the IL on June 28 because of a right hamstring strain.

All-Star left-hander Martín Pérez (9-3, 2.85 ERA), coming off his first loss in 20 starts since April, pitches the series finale for Texas. Right-hander Logan Gilbert (10-5, 3.47) will be on the mound for the Mariners.