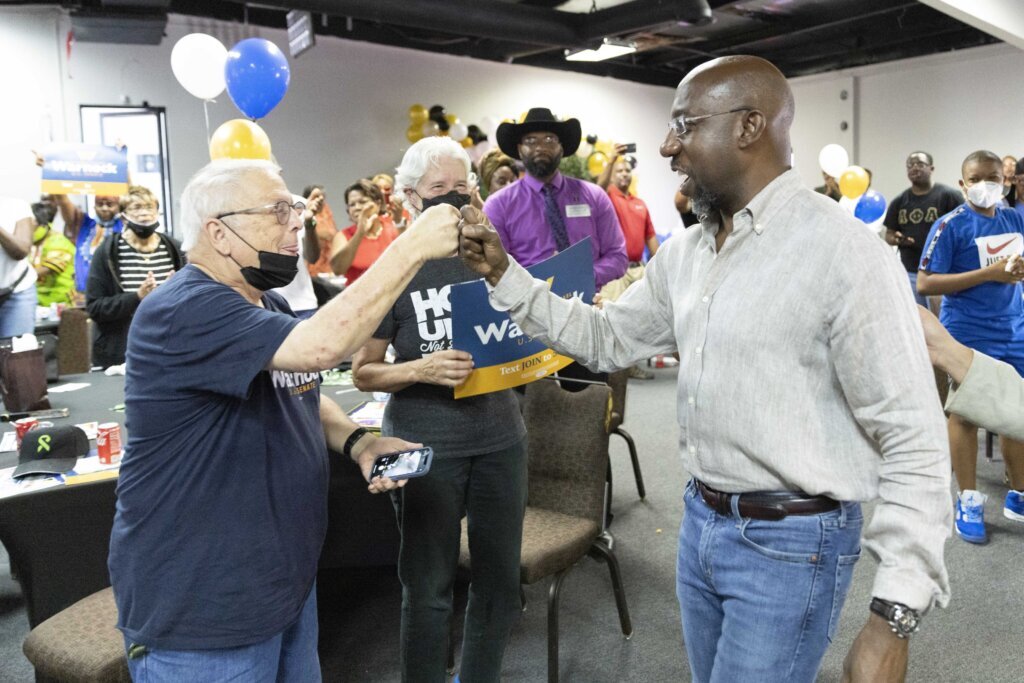 “They’re going to take away our democratic rights one after another,” longtime state lawmaker Nan Orrock warned partisans at a birthday party for the senator, who turned 53 on July 23. “Failure,” she said, “is not an option.”

“I work with anybody to get something good done for the people of Georgia,” he told the same crowd, highlighting a trio of Republican senators with whom he has made legislative deals. Warnock mentioned President Joe Biden’s name just once and referred several other times only to “the president of the United States,” trying to distinguish himself from Biden — and the rising inflation that has marked his term.

Running for his first full Senate term, Warnock is pitching himself as a senator willing to do whatever it takes to help his state. That’s a shift from his approach in what were nationally elevated twin runoff campaigns won by Warnock and fellow Georgia Democrat Jon Ossoff in January 2021, giving their party Senate control two months after Biden was elected president.

Now, with inflation up and Biden’s popularity down, Warnock requires a more nuanced argument, and he’s selling his work in Washington, especially on the economy, as something distinct from the White House and the Senate’s Democratic leadership.

Republicans sense an opportunity in a state they dominated for two decades before 2020. Walker, a first-time candidate like Warnock was two years ago, is making every effort to shape the contest as a referendum on what his campaign calls the “Biden-Warnock agenda.”

“This is still a national race,” said Gail Gitcho, a senior adviser to Walker. “The burden is on Raphael Warnock and the extremely close ties he has to Joe Biden in this environment. Herschel has put him on the defensive.”

Warnock’s strategy of playing up his “bipartisan” credentials and leaving other Democrats to attack Republicans and rally the party faithful could be the incumbent’s only shot to recreate his runoff coalition. In that election, Democrats were united and enthusiastic; Republicans were not, especially GOP-leaning moderates whom then-President Donald Trump alienated with his lies that Biden’s victory was fraudulent. Some of those voters helped Warnock to his 94,000-vote win a 2% margin. This time, Warnock cannot depend on Trump to push those key swing voters in his direction.

Attracting them again starts with not directly dignifying Republican attacks.

He pivoted again when asked about Biden’s performance. “I’m focused on the job I’m doing,” Warnock said. “When that means standing with this person or that person, it’s based on what it does for Georgia.”

Even on the president’s accomplishments, Warnock avoids partisan cheerleading. He hailed the American Rescue Plan, a coronavirus relief package passed without any Republican votes, for its tax cuts aimed at lower-income workers. He praised a long-sought infrastructure bill as a “bipartisan” success that included “the Cruz-Warnock amendment.”

“Hear me out, now,” Warnock said, laughing as some of his supporters jeered Sen. Ted Cruz, R-Texas. The two men, Warnock explained, wanted to make the eastward expansion of Interstate 14 — now just a short stretch in central Texas — a federal priority. Because a Senate committee hadn’t endorsed the idea, the unlikely partners had to work the full Senate.

“Guess what: The highway that runs through Texas also runs through Georgia,” Warnock said. “It goes past red districts and blue districts. … Everybody needs to be able to get to where they need to go.”

Warnock noted other efforts with Republican Sens. Tommy Tuberville of Alabama and Marco Rubio of Florida. With Tuberville, he led a measure that would open European markets to peanut farmers in their two states. With Rubio, he worked on legislation to improve maternal mortality rates in the United States.

Tuberville is a staunch Trump ally. Rubio came to Georgia to campaign against Warnock at the outset of the runoff campaign. Warnock didn’t mention those details.

As for the uneven economy, Warnock notably referred to “global inflation” while sidestepping Biden.

He noted his work on a jobs and technology measure, which cleared the Senate on Wednesday with 17 Republican votes. The bill, which aims to boost computer chip production in the United States, would strengthen supply chains and expand national technology production, among other investments, Warnock explained.

The senator emphasized his proposals to cap insulin costs for people with diabetes and allow Medicare to negotiate for lower drug prices from pharmaceutical companies. He reminded supporters that he called on Congress to suspend the federal gas tax in February, early in the 2022 energy price surge.

“Somebody must have been listening,” Warnock said, because Georgia’s Republican administration suspended the state gas tax in March and “the president of the United States is now on record saying we should suspend the gas tax” nationally.

Warnock reminded reporters that he came out swinging when Biden’s budget plans called for closing the Pentagon’s combat readiness center in Savannah. “I stood up against the administration” and “a terrible idea,” Warnock said, taking a position that aligns him with the Republicans in the state’s congressional delegation.

Additionally, he said he’s “pushing the president of the United States right now” on student loan cancellations for some borrowers. Biden’s Department of Education already has eased some rules on debt repayment, and the president is still considering a more blanket forgiveness up to a cap. The White House has said a decision on the amount could come in August.

In Walker’s camp, Gitcho relishes the thought of Warnock replicating scenes from the two-month runoff blitz, when Biden traveled twice to Georgia and shared stages with Warnock and Ossoff. “The best surrogate Warnock could have,” she said of the beleaguered president. “But we know that won’t happen.”

Warnock instead appears ready to brandish his party credentials carefully. In fundraising solicitations and online ads, Warnock says he’s “running to keep Georgia blue.” But the campaign targets those to reliable Democratic voters.

Standing over birthday cakes and candles, the senator fondly recalled his runoff victory and thanked Georgians who “gave us the narrowest majority.”

“Think about what would have happened had it gone the other way,” he allowed. But at his crescendo 15 minutes later, the Baptist minister went bigger — and perhaps toward a potentially decisive middle.

“We are one nation,” he said, voice rising. “We are one people. And come November, Georgia is going to do it one more time.”