SIR ALEX FERGUSON dropped his washing off at the dry cleaners this morning, less than 48 hours after his beloved Manchester United were taken to the cleaners by Brentford.

The 80-year-old looked to be in decent spirits as he got back into his car in Wilmslow, Cheshire.

In his pomp, Ferguson would have dealt a few hairdryers on Saturday as United were humiliated 4-0 by Brentford.

The Red Devils legend was in attendance for their opening day 2-1 defeat to Brighton at Old Trafford.

And he’ll have been disgusted to witness how his beloved United have been playing.

Erik ten Hag dished out a dramatic punishment of his own after his side’s latest embarrassment, making his players come in on their day off yesterday. 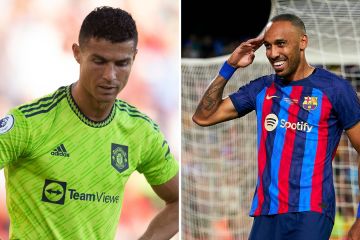 Stars were left “in ruins” after being made to run 8.5 miles in 33 degree heat at Carrington.

The atmosphere within United is at an all-time low, with players having reportedly argued last Thursday.

Cristiano Ronaldo’s situation has not helped the mood within the camp.

Ferguson was at Carrington on the day his former favourite finally returned after skipping United’s pre-season tour of Thailand and Australia for “family reasons”.

Ronaldo, 37, reiterated his desire to leave that day – believing he’d had a gentleman’s agreement with the club that he could depart if they didn’t finish in the top four.

The sulky star’s moody disposition has not helped the atmosphere in the dressing room – with some of his team-mates believing things would improve if United relented and sold him.

Ronaldo returned to action in the 1-1 friendly draw with Rayo Vallecano, but enraged Ten Hag by leaving ten minutes before the end after being substituted.

He was then introduced from the bench against Brighton, before returning to the starting XI at Brentford.