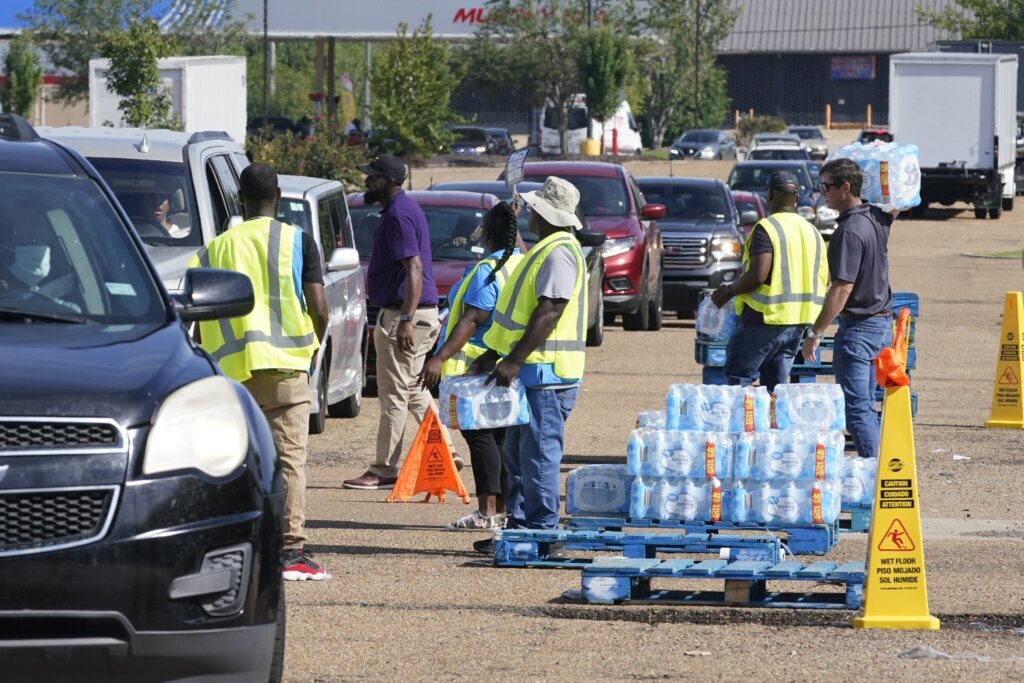 Mississippi officials set up emergency distribution centers for handouts of water and hand sanitizer Thursday in the capital city of Jackson, as efforts to restore a flood-impaired, long-troubled water system continued.

Jackson’s residents were already under a boil-water order before flooding from the Pearl River exacerbated long-standing problems at one of the city’s two water treatment plants.

Officials said they made progress overnight in refilling tanks, treating water and increasing pressure at the O.B. Curtis Water Plant, the facility at the root of the latest water woes. Residents closer to the facility had pressure approaching normal levels, the city said in a news release, but added that many in the city still had little or no water pressure.

“To everyone in the city: I know that you are dealing with a profoundly unfair situation,” Reeves said. “It’s frustrating, it’s wrong and it needs to be fixed.”

The governor and Mississippi Emergency Management Agency director Stephen McCraney promised that the state would look for long-term solutions to the city’s water problems.

The water crisis affects the city’s 150,000 residents — many of whom have been unable to take showers or flush toilets — plus an estimated 30,000 who come into the city to work at businesses without water pressure, Reeves said.

Reeves said those businesses are suffering major economic harm because of the crisis. McCraney said the state will look into the availability of federal Small Business Administration loans to aid them.

City communications director Melissa Payne said all of the water system’s customers — 46,000 residential accounts and 6,000 commercial — were affected by low water pressure at some time during the crisis. The latest available figures from the city showed that 80% of the water system’s customers had little or no water as of Wednesday morning. It was unclear how many had been substantially restored as of Thursday.

Reeves declared a state of emergency Monday night after excessive rainfall and flooding from the Pearl River exacerbated problems at the treatment plant. On Tuesday, President Joe Biden approved an emergency declaration for the state. Biden called Lumumba on Wednesday to discuss response efforts, including support from the Federal Emergency Management Agency, the Environmental Protection Agency and the Army Corps of Engineers.

“We are doing everything we can to make sure we’re helping the people of Mississippi,” White House Press Secretary Karine Jean-Pierre said Thursday. “We are in close touch.”

Thursday morning, the city reported “significant progress” in restoration efforts at the treatment plant, with output measuring 78 pounds per square inch, approaching a goal of 87 PSI.

“There are still challenges to navigate as the intake water source changes chemistry again. Operator schedules have been adjusted to increase coordination between shifts,” the city statement said.

In addition to on-site repairs, the city is working to obtain more chemicals needed for treatment.

Michael Goldberg is a corps member for the Associated Press/Report for America Statehouse News Initiative. Report for America is a nonprofit national service program that places journalists in local newsrooms to report on undercovered issues. Follow him on Twitter at twitter.com/mikergoldberg.