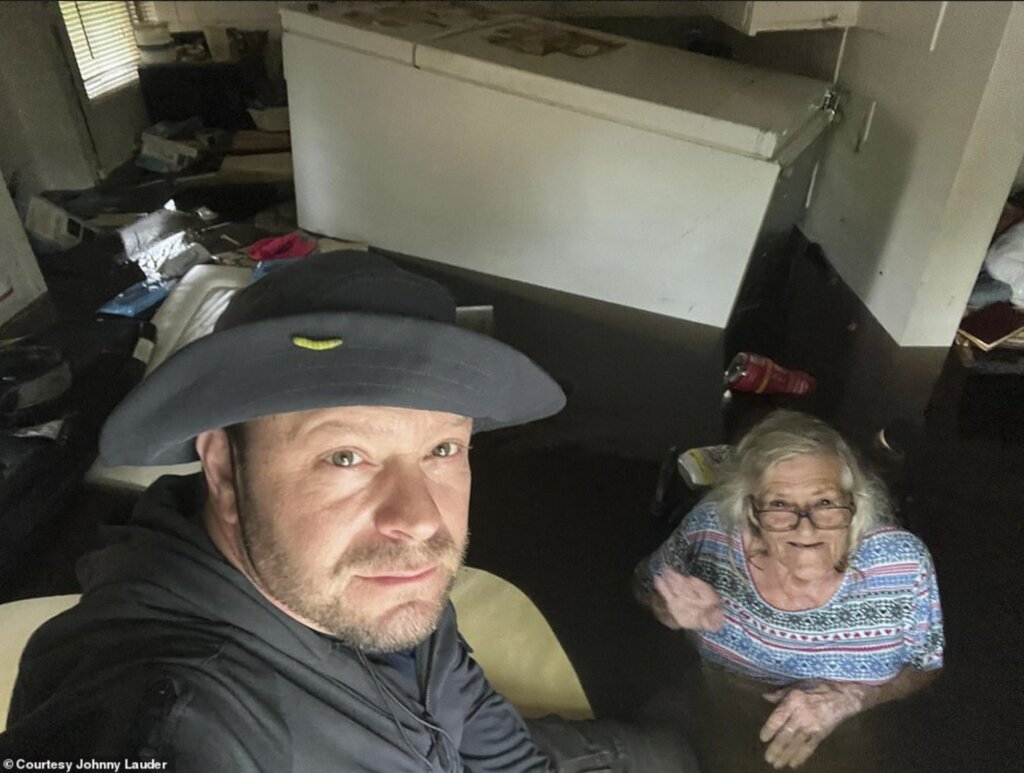 In one photo, Johnny Lauder’s 86-year-old mother is in her Florida home, submerged nearly to her shoulders in black murky…

In one photo, Johnny Lauder’s 86-year-old mother is in her Florida home, submerged nearly to her shoulders in black murky water, staring straight at the camera, mouth open.

In another, she lies just above the waterline on a table, wrapped in sheets to keep warm. In yet another, she’s being pushed through the water in a wheelchair, her rescue nearly complete.

The photos were taken after Hurricane Ian made landfall last Wednesday, bringing a powerful storm surge and 150 mph (241 kph) winds. They tell the story of Lauder’s journey to save his mother, Karen Lauder, from the home she refused to leave, despite the family’s pleading .

He sent the short videos and photos to his family, letting them know he was OK.

“That’s how I unintentionally documented the whole ordeal,” he said.

Before the storm hit, Lauder said his mother — who lost a leg and requires a wheelchair — “ kicked and screamed” and said she didn’t want to leave her home in Naples, Florida. “We didn’t evacuate because we couldn’t leave her behind,” he explained.

She did not expect the level of destruction Ian would bring. Speaking from his son’s home on Tuesday, Lauder said his mom’s house had flooded about six inches during Hurricane Irma in 2017, so she assumed a similar outcome with Ian.

Instead, Ian ravaged Florida as one of the most powerful storms ever recorded in the U.S. and flooded more than three feet of her home, trapping her inside. She called her son for help.

“She said the water was up to her wheelchair and hitting her belly button,” Lauder said. He was sheltering at his son’s house, a half mile (0.8 km) from his mom.

Lauder, who said he has rescue diver training, dove out the window. He swam, walked, waded and kicked through water for about 45 minutes to get to her house. He said a van and a couple cars floated past him as he steered clear of sparking electric poles.

Lauder said he heard his mother screaming as he approached.

“It was a sense of terror and relief at the same time,” he said. “The terror was that I didn’t know if something was falling on her or if she was trapped and hurt. But the relief was knowing that there’s still air in her lungs.”

He put her on a table and bundled her in dry sheets from a high shelf. He worried about the sores around her body — open wounds that were dangerously susceptible to infection in the bacteria —ridden floodwater.

They waited three hours for the water to subside, so he could push her through the streets in her wheelchair. When the water was a couple feet high, he called for his 20-year-old son to join them and help push grandma to safety.

Around 1 a.m. — about 11 hours after Lauder’s mother called him for help — Lauder returned to his older son’s house with his mother and younger son in tow.

Lauder said his mom was later taken to a hospital, because she had some infections. “But they were treated, and she’s warm. She’s in a soft comfy bed. She’s good,” he added.

Cassandra Clark, Lauder’s sister-in-law in Miami, started a GoFundMe to raise money for Lauder, his mother and his sons.

“While we’re so grateful our family is physically alright, they’ve lost absolutely everything in this storm and, unfortunately, did not have any renter’s insurance,” Clark wrote.

“I get choked up that all these people are helping me and they don’t even know me,” Lauder said.

He hopes that people will know now to evacuate. “My mom has changed her tone: she will be evacuating next time,” he said. “I hope people learn from others’ mistakes and not their own.”