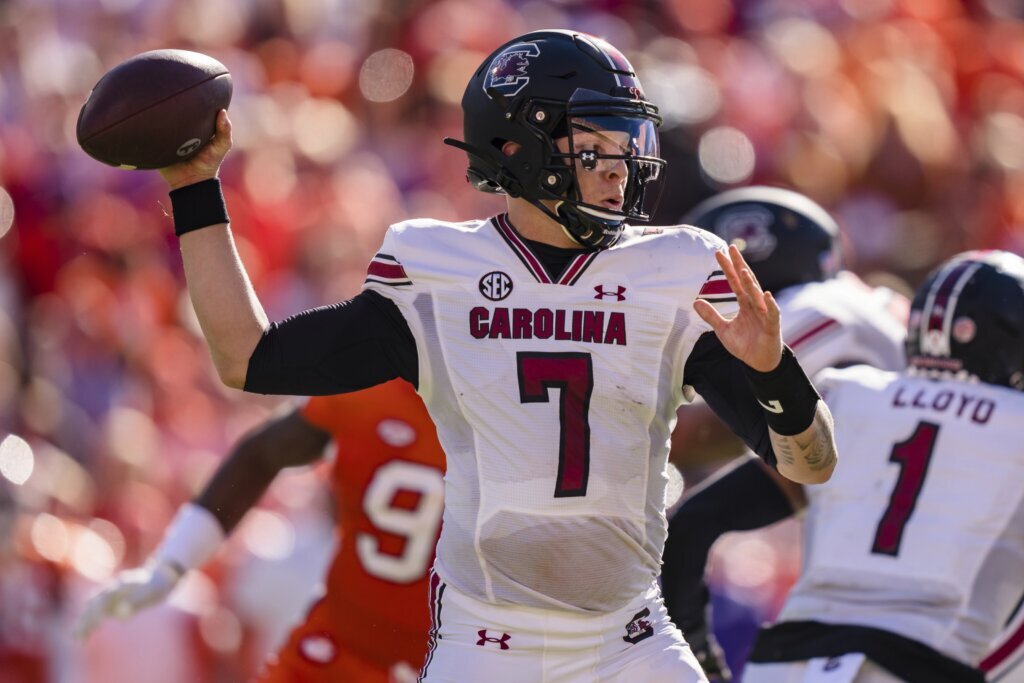 CLEMSON, S.C. (AP) — Some teams would been content with a season-defining win over top-10 Tennessee. Not South Carolina and…

CLEMSON, S.C. (AP) — Some teams would been content with a season-defining win over top-10 Tennessee. Not South Carolina and certainly not Gamecocks quarterback Spencer Rattler.

South Carolina followed up its 63-38 stunner over the Vols last week with a 31-30 victory over No. 7 Clemson on Saturday, ending the title chances of another College Football Playoff contender for a second straight week.

“We wanted more. We knew this was the biggest game of the season for us,” said Rattler, who passed for 360 yards and two touchdowns. “These last two games will change the narrative for program history.”

Saturday’s game certainly turned a one-sided rivalry on its ear. South Carolina has played in the shadow of two-time national champion Clemson the past nine years, losing the past seven against the Tigers (10-2, 8-0 ACC, No. 8 CFP), who had been on a 40-game winning streak at home.

South Carolina and Rattler, who threw for 438 yards and six touchdowns against Tennessee, ended any chance Clemson had at a playoff berth.

“We were the feel-good story in college football last week, but nobody thought we were good enough to win this game,” Gamecocks coach Shane Beamer said.

Antwane Wells Jr. had nine catches for 131 yards, including touchdowns of 4 and 72 yards.

Clemson was looking to set a series record with its eighth in a row over South Carolina. And the Tigers were up 30-21 midway through the third period after Will Shipley’s 11-yard burst to the end zone.

That’s when Wells, the James Madison transfer, broke behind the defense for a 72-yard scoring catch two plays later.

After Clemson’s three-and-out, Rattler moved the Gamecocks to the Tigers 10 before Jeter connected for a 35-yard kick to go 10 of 10 on the season.

Clemson had no answer after South Carolina took the lead. The Tigers managed only 15 yards on three series as DJ Uiagalelei went a combined 0-of-6 passing with an interception.

Clemson got the ball back a final time with 2:09 left, but Antonio Williams fumbled on a punt return and South Carolina’s Nick Emmanwori recovered.

“It’s a play here or there. It’s a one-point game,” Clemson coach Dabo Swinney said. “There’s a lot of things that are demoralizing when you don’t win. Bottom line, South Carolina played better.”

The Gamecocks went wild in celebration, rushing to the team’s fans and band in Death Valley’s West end zone.

Wells wrapped it up with his final catch for a first down with 1:04 left. Rattler took the final snap and heaved the ball high in the air in joy.

Rattler finished 25 of 39 passing with two interceptions, one of which linebacker Jeremiah Trotter Jr. returned for a 35-yard TD.

Uiagalelei completed 8 of 29 passes for 99 yards with a touchdown and an interception. Shipley gained 132 yards with a scoring run.

South Carolina: The Gamecocks probably wish there was more left to the season. It’s been a landmark regular season in Beamer’s second season as coach, with wins over ranked Kentucky, vs. Texas A&M and against the seemingly CFP-bound Vols before beating rival Clemson.

Clemson: This was not the way the Tigers hoped to head into the ACC title game against North Carolina next week. Clemson needed to win out and defeat the Tar Heels for any chance to reach the College Football Playoff.

Swinney was asked if Uiagalelei’s problems late against South Carolina might lead to more time for backup freshman passer Cade Klubnik. “We’ll see,” the coach said. Swinney and offensive coordinator Brandon Streeter thought about bringing Klubnik in against the Gamecocks but decided that Uiagalelei “was OK.”

Part of the reason Clemson struggled with its comeback was Gamecocks punter Kai Kroeger, whose kicks were downed at the 2 and 3 to start consecutive fourth-quarter drives for the Tigers. Kroeger averaged 53.7 yards a punt on his seven attempts.

Clemson will face North Carolina in the ACC championship game next Saturday.