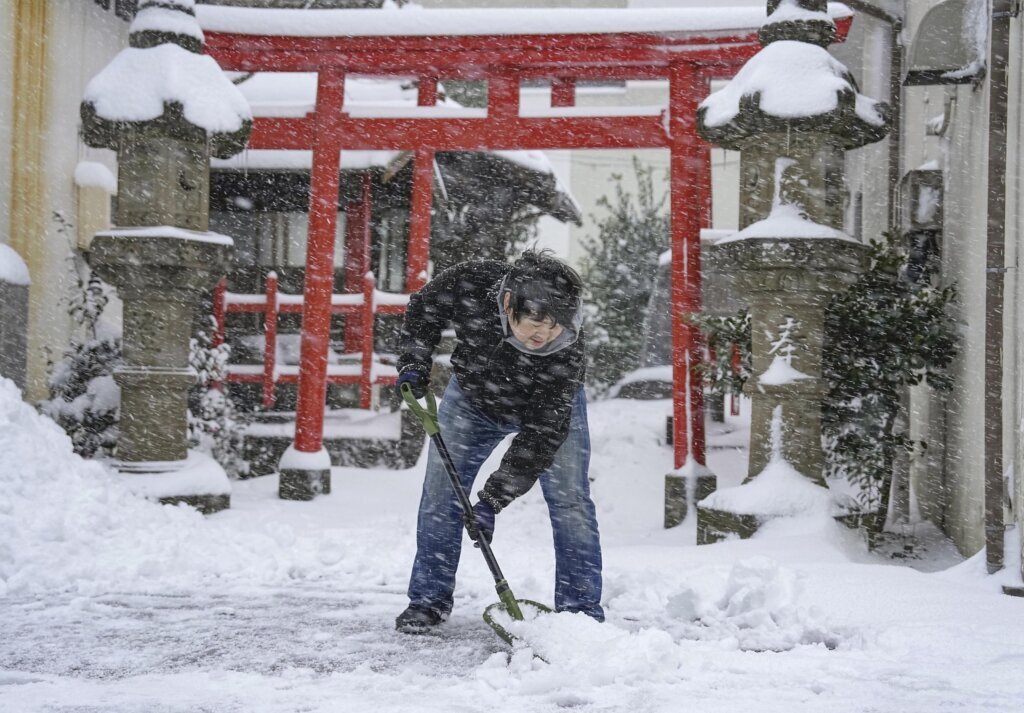 SEOUL, South Korea (AP) — Thousands of travelers swarmed a small airport in South Korea’s Jeju island on Wednesday in a scramble to get on flights following delays by snowstorms as frigid winter weather gripped East Asia for the second straight day.

Officials at South Korea’s Ministry of the Interior and Safety didn’t immediately report any major damage or injuries from subzero temperatures and icy conditions that have affected most of the country since Tuesday.

But at least eight roads and 10 sea routes remained closed as of Wednesday afternoon. About 140 homes in capital Seoul and nearby regions reported busted water pressure pumps or pipes as temperatures dipped to around minus 15 to minus 20 degrees Celsius (5 degrees to minus 4 degrees Fahrenheit) across the mainland.

At least one person has died and two more deaths were being investigated in connection with the cold weather, Chief Cabinet Secretary Hirokazu Matsuno told reporters.

Thousands of people using train services in Kyoto and Shiga prefectures in western Japan were forced to stay overnight in carriages or stations, while vehicles on major roads across the country were left stranded and hundreds of flights canceled, Kyodo News reported.

Air traffic returned to normal after hundreds of flights in and out of Jeju were grounded Tuesday because of strong winds and snow, stranding an estimated 40,000 travelers who had visited the resort island for Lunar New Year holidays.

Around 540 flights, including nearly 70 that were temporarily added by transportation authorities in an emergency response, were scheduled in and out of Jeju on Wednesday alone, mostly to take passengers back to mainland cities.

The Korea Airports Corporation said the operating hours at Gimpo airport near Seoul was extended until 1 a.m. to accommodate the increased flights, which were expected to bring back 70% to 80% of the passengers who were stuck in Jeju.

The winter storms appeared to be moving toward the greater Seoul area and nearby regions, where heavy snow was expected from late Wednesday to Thursday afternoon, according to the Safety Ministry, which warned about dangerous road conditions.

Officials in Gyeonggi province, which surrounds Seoul, said nearly 7,000 cold-weather shelters will be open across the region and that several thousand tons of snow-clearing chemicals would be used to improve the safety of roads that may turn icy.