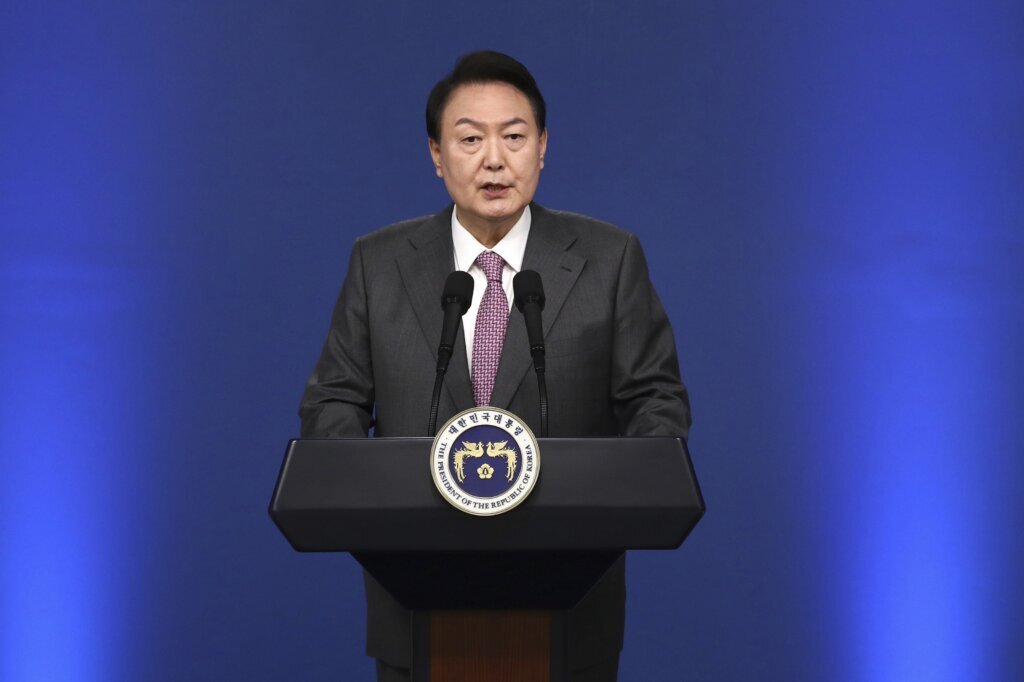 SEOUL, South Korea (AP) — South Korean President Yoon Suk Yeol said Wednesday his government has no plans to pursue its own nuclear deterrent in the face of growing North Korean nuclear weapons capabilities, even as the North fired two suspected cruise missiles toward the sea in the latest display of an expanding arsenal.

Yoon’s call for Pyongyang to return to diplomacy aimed at exchanging denuclearization steps for economic benefits came hours after the South’s military detected that the North fired the missiles from the western coastal town of Onchon toward the sea. South Korea’s Joint Chiefs of Staff didn’t immediately release further details, including how far the weapons traveled.

Yoon’s office said his national security director, Kim Sung-han, discussed the launch with other officials before Yoon addressed reporters in a news conference and reviewed the South’s military readiness. Tensions could further rise as the United States and South Korea kick off their biggest combined training in years next week to counter the North Korean threat. The North describes such drills as invasion rehearsals and has often responded to them with missile tests or other provocations.

Yoon’s comments came days after he proposed an “audacious” economic assistance package to North Korea if it abandons its nuclear weapons program, while avoiding harsh criticism of the North after it threatened “deadly” retaliation over a COVID-19 outbreak it blames on the South.

Yoon’s proposal for large-scale aid in food and healthcare and modernizing power and port infrastructure resembled previous South Korean offers that were rejected by North Korea, which is speeding its development of nuclear weapons and ballistic missiles, seen by leader Kim Jong Un as his strongest guarantee of survival.

Still, Yoon expressed hope for “meaningful dialogue” with North Korea over his plan and stressed that Seoul is willing to provide corresponding economic rewards at each step of a phased denuclearization process if the North commits to a genuine “roadmap” toward fully abandoning its weapons program.

“We are not telling them to ‘denuclearize entirely first and then we will provide,’” Yoon said. “What we are saying is that we will provide the things we can in correspondence to their steps if they only show a firm determination (toward denuclearization).”

Inter-Korean ties have worsened amid a stalemate in larger nuclear negotiations between North Korea and the U.S. that derailed in early 2019 because of disagreements over a relaxation of crippling U.S.-led sanctions on the North in exchange for disarmament steps.

North Korea has ramped up its missile testing to a record pace in 2022, launching more than 30 ballistic weapons so far, including its first intercontinental ballistic missiles in nearly five years.

The heighted testing activity underscores North Korea’s dual intent to advance its arsenal and force the United States to accept the idea of the North as a nuclear power so it can negotiate economic and security concessions from a position of strength, experts say. Kim could up the ante soon as there are indications that the North is preparing to conduct its first nuclear test since September 2017, when it claimed to have developed a thermonuclear weapon to fit on its ICBMs.

While Kim’s ICBMs get much of the international attention, North Korea is also expanding its range of nuclear-capable, short-range missiles that can target South Korea. Kim has punctuated his weapons development with threats to proactively use his nuclear weapons in conflicts against the South or the U.S., which experts say communicate an escalating nuclear doctrine that could increase concerns for its neighbors.

Yoon has vowed to strengthen the South’s defenses through its alliance with the United States by resuming large-scale military training that was canceled or downsized during the Trump years and boosting the South’s missile defenses. The Biden administration has also reaffirmed U.S. commitments to defending South Korea and Japan, including “extended deterrence,” referring to an assurance to defend its allies with its full military capabilities, including nuclear.

But some experts say it’s becoming clear South Korea has no clear way to counter the leverage North Korea has with its nukes, expressing concerns that Washington might hesitate to defend its ally in the event of war when Kim’s ICBMs would pose a potential threat to mainland American cities.

Some South Koreans have called for the reintroduction of tactical U.S. nuclear weapons that were removed from the South in the 1990s, or for Seoul to pursue its own deterrent.

Yoon dismissed the possibility of the latter during the news conference, saying that Seoul will stay committed to an international treaty aimed at preventing the spread of nuclear weapons.

“I believe the NPT (Non-Proliferation Treaty) regime is a very important and necessary premise for permanent world peace,” Yoon said, expressing hope that the U.S. deterrence strategy for its allies could evolve to counter the North’s growing threat.

Yoon’s comments came after North Korea last week claimed a widely disputed victory over COVID-19 but also blamed South Korea for the outbreak. North Korea insists leaflets and other objects flown across the border by activists spread the virus, an unscientific claim Seoul describes as “ridiculous.”

North Korea has a history of dialing up pressure on South Korea when it doesn’t get what it wants from the United States, and there are concerns that North Korea’s threat portends a provocation, which could include a nuclear or missile test or even border skirmishes. Some experts say North Korea may stir up tensions around joint military exercises between the allies that start next week.

Anthony Joshua vs Oleksandr Usyk – boxing boost: Get AJ at 6/1 to win is rounds 7-12 with Sky Bet

Akasa Air to add one aircraft every two weeks in next 18 months, says CEO