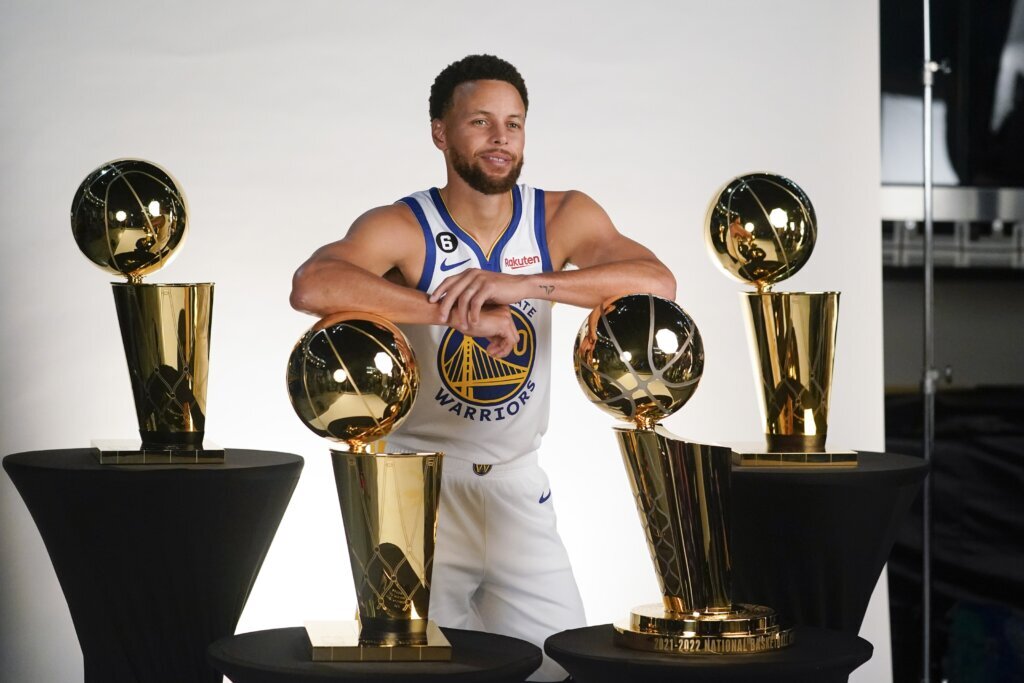 SAN FRANCISCO (AP) — Stephen Curry’s bright-colored “Sour Patch” sneakers squeaked loudly announcing his media day arrival. He then took his spot, tucked in that iconic No. 30 jersey and posed with all of his championship hardware.

A trophy on either side of him, his elbows propped on the other two.

The two-time MVP is showing that his swagger is as strong as ever heading into his 14th NBA season.

“That championship glow is real,” Curry said with a smile.

The Golden State star and reigning NBA Finals MVP will turn 35 this season and is still at the top of his game, ready to lead another championship run as the Warriors seek to repeat.

He certainly doesn’t take any of this success for granted, knowing how hard it is each season to get back to the top — even when Bucks superstar Giannis Antetokounmpo calls him “the best player in the world.”

“And embracing it. My 14th year. I feel fresh and prime, ready to go,” Curry said Sunday. “I feel like in my head still getting better, trying to feed off that. Understand it’s a long journey and we are doing some defensive strategy and stuff like that yesterday, and it kind of felt for a second we were still preparing for the Celtics and the finals series because it didn’t feel like that long ago.”

Except for the fact this season he will have Splash Brother Klay Thompson alongside him from the opening tip for the defending NBA champions, who depart the Bay Area on Tuesday for Tokyo to face the Washington Wizards in a pair of preseason games Friday and Saturday in Saitama, Japan.

Thompson returned Jan. 9 from an absence of more than 2 1/2 years following a pair of devastating injuries. The 32-year-old Thompson hadn’t played since suffering a torn ACL in his left knee in Game 6 of the 2019 NBA Finals as Toronto clinched the championship. While rehabbing from surgery for that injury, he tore his right Achilles tendon scrimmaging on his own in November 2020.

“I’m hungry as ever still because I still remember those two years I had to watch. I’m eager to play a full season and show people what I’m capable of again,” Thompson said.

Curry cherished another shorter offseason in which a highlight was going back to Davidson College to celebrate his graduation and coach Bob McKillop’s retirement after a 33-year career at the school.

“Obviously you enjoy the offseason and know all the work you’ve put in over the course of your career and especially the last three years,” Curry said. “To get back there was meaningful, and you embrace it and appreciate it. Appreciate the vibe you’ve built with the new-look team built on the core, the guys that have been around the block.

“Very excited about what it means coming into this season trying to defend, knowing there will be new challenges for everybody as a team and everybody individually.”

Draymond Green warned of the “championship hangover” and how he will strive to keep Golden State from becoming complacent.

One big key in that effort: Veteran swingman Andre Iguodala, 38, is expected to sign and arrive Monday ahead of the trip.

“We are all so proud of what we accomplished last year, but that’s in the past,” Thompson said. “The greats stay hungry, and we all have our motivations for why we want to win another one.”

“I really haven’t been paying attention too often,” Poole said of landing an extension.

Green, who along with Curry, Iguodala and Thompson are the core and have been around for each of the finals runs dating to the 2015 championship, doesn’t expect to secure a new deal himself before the season.

“I don’t think it will happen,” he said. “And so for me, I’m just focused on this season and being as great as I can be, I know I’m capable of being, and winning another championship and reaching my individual goals.”

Big man Kevon Looney hopes to play all 82 games again after becoming one of just five to do so last season — if the training staff approves, of course.

When told of Looney’s goal, Thompson could only ponder that in amazement.