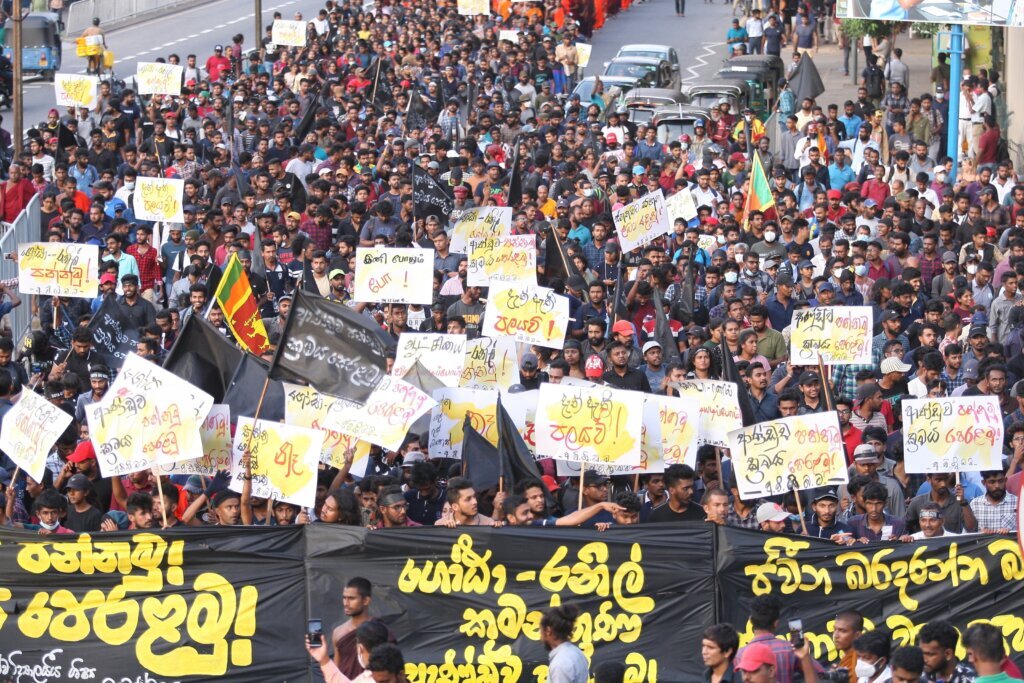 Thousands of protesters carrying Sri Lankan flags rode on the relatively few vehicles on the roads due to an acute fuel shortage, while others rode bicycles and many walked to protest sites in the capital, Colombo, from the suburbs after police lifted an overnight curfew.

Protesters blame Rajapaksa for the economic woes and have occupied the entrance to his office for three months.

Sri Lanka’s Prime Minister Ranil Wickremesinghe said last month that the country’s economy has collapsed. The government’s negotiations with the International Monetary Fund have been complex because it has now entered negotiations as a bankrupt state.

In April, Sri Lanka announced it is suspending repaying foreign loans due to a foreign currency shortage. Its total foreign debt amounts to $51 billion of which it must repay $28 billion by the end of 2027.

Police imposed a curfew in Colombo and several other main urban areas on Friday night but withdrew it Saturday morning amid objections by lawyers and opposition politicians who called it illegal.

Riot police and army personnel are deployed in the city, and the area surrounding the president’s official residence is heavily barricaded.

U.S. Ambassador to Sri Lanka Julie Chung on Friday asked people to protest peacefully and called for the military and police “to grant peaceful protesters the space and security to do so.”

“Chaos & force will not fix the economy or bring the political stability that Sri Lankans need right now,” Chung said in a tweet.

The economic crisis has led to a heavy shortage of essentials like fuel, cooking gas and medicines, forcing people to stand in long lines to buy the limited supplies.

Months of protests have nearly dismantled the Rajapaksa political dynasty that has ruled Sri Lanka for most of the past two decades. One of Rajapaksa’s brothers resigned as prime minister last month, and two other brothers and a nephew quit their Cabinet posts earlier.

President Rajapaksa has held on to power.

Wickremesinghe took over as prime minister in May and protests temporarily waned in the hope he could find cash for the country’s urgent needs but people now want him to resign saying he has failed to fulfill his promises.

How England’s young lions have fared 500 days after U17 World Cup glory, from non-league to Champions League