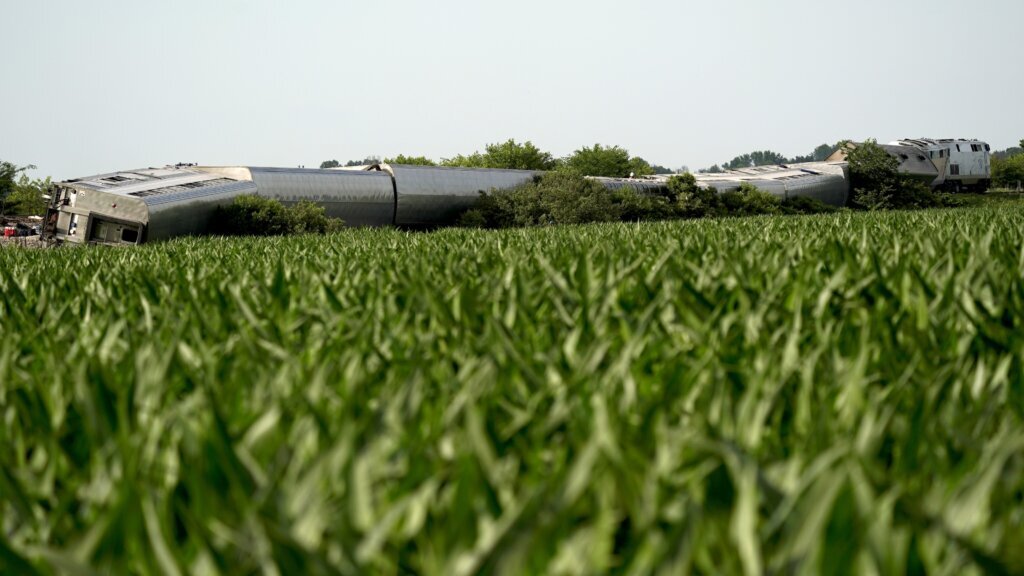 MENDON, Mo. (AP) — A Missouri Department of Transportation plan released this year cited a need to improve safety at…

MENDON, Mo. (AP) — A Missouri Department of Transportation plan released this year cited a need to improve safety at the rail crossing where an Amtrak train and a dump truck collided, resulting in the deaths of two passengers and the truck driver.

The crossing in a rural area near Mendon in western Missouri, about 84 miles (135 kilometers) northeast of Kansas City, has no lights or other signals to warn of an approaching train.

Amtrak’s Southwest Chief was traveling from Los Angeles to Chicago Monday afternoon when it struck the truck and derailed at the crossing. An Amtrak spokeswoman said injured passengers were taken to eight hospitals. At least 60 people were hurt, according to officials at many of those hospitals.

The Missouri State Highway Patrol said the train was carrying about 207 passengers and crew, but Amtrak said in a statement there were 275 passengers and 12 crew. The disparity could not immediately be resolved.

The collision derailed seven cars, according to the Missouri State Highway Patrol. The truck was broken into pieces. National Transportation Safety Board investigators were at the scene Tuesday, trying to determine how the accident happened and why the truck was on the tracks. The damaged tracks had been repaired and freight trains were operating.

In January, the Missouri Department of Transportation submitted to the Federal Railroad Administration its “State Freight & Rail Plan” plan. It included a list of proposed improvements, including the installation of lights and gates, along with roadway improvements.

The project was estimated at $400,000. Typically, the federal government would pay 80% and the county 20%. MoDOT spokeswoman Linda Horn said in an email that any project must be worked out in coordination with the track owner, BNSF Railway, and the county “based on very limited funding.”

BNSF spokeswoman Lena Kent said that if the state wants an upgrade, the next step is a site review.

“We would work with all of the parties involved to determine if additional warning devices are needed and then work to get those designed, built and installed,” Kent said.

Local residents have complained that the overgrowth of brush and the steep incline from the road to the tracks makes it hard to see oncoming trains from either direction. Mike Spencer, who grows corn and soybeans on land surrounding the intersection, said the crossing is especially dangerous for those driving heavy, slow farm equipment.

Spencer said he had contacted state transportation officials, Chariton County commissioners and BNSF about the potential danger. Spencer, who is on the board of a local levy district, said the dump truck driver was hauling rock for a levy on a local creek, a project that had been ongoing for a couple of days.

Earlier this month, Spencer posted a video on Facebook of the crossing that shows the steep gravel incline leading up to it.

“We have to cross this with farm equipment to get to several of our fields,” Spencer wrote with the posting. “We have been on the RR for several years about fixing the approach by building the road up, putting in signals, signal lights or just cutting the brush back.”

The posting noted that some trains pass by at up to 90 mph. “If you cross here with a vehicle stop, approach very slowly, then look both ways there are 2 tracks and around 85 trains go through there everyday,” Spencer wrote.

Passengers recounted the frightening aftermath of the accident.

Rob Nightingale of Taos, New Mexico, said he was dozing off in his sleeper compartment when the lights flickered and the train rocked back and forth and he felt it tip.

“I saw the ground coming toward my window, and all the debris and dust,” Nightingale told The Associated Press. “Then it sat on its side and it was complete silence. I sat there and didn’t hear anything. Then I heard a little girl next door crying.”

Nightingale was unhurt and he and other passengers were able to climb out of the overturned train car through a window.

Passengers included 16 youths and eight adults from two Boy Scout troops who were traveling home to Appleton, Wisconsin, as well as high school students from Pleasant Ridge High School in Easton, Kansas, who were headed to a Future Business Leaders of America conference in Chicago.

It was the second Amtrak collision in as many days. Three people in a car were killed Sunday afternoon when an Amtrak commuter train smashed into it in Northern California, authorities said.

People have been injured or killed in at least six other accidents involving Amtrak trains since 2015. Last year, three people died and others were injured when an Amtrak derailed in north-central Montana as it traveled from Chicago to Seattle.

Amtrak is a federally supported company that operates more than 300 passenger trains daily in nearly every contiguous U.S. state and parts of Canada. The Southwest Chief takes about two days to travel from Los Angeles to Chicago, picking up passengers at stops in between.

Wayne Rooney’s agent ‘under investigation by FA for handing over £1.6m cheque to pay May wages at crisis-club Derby’