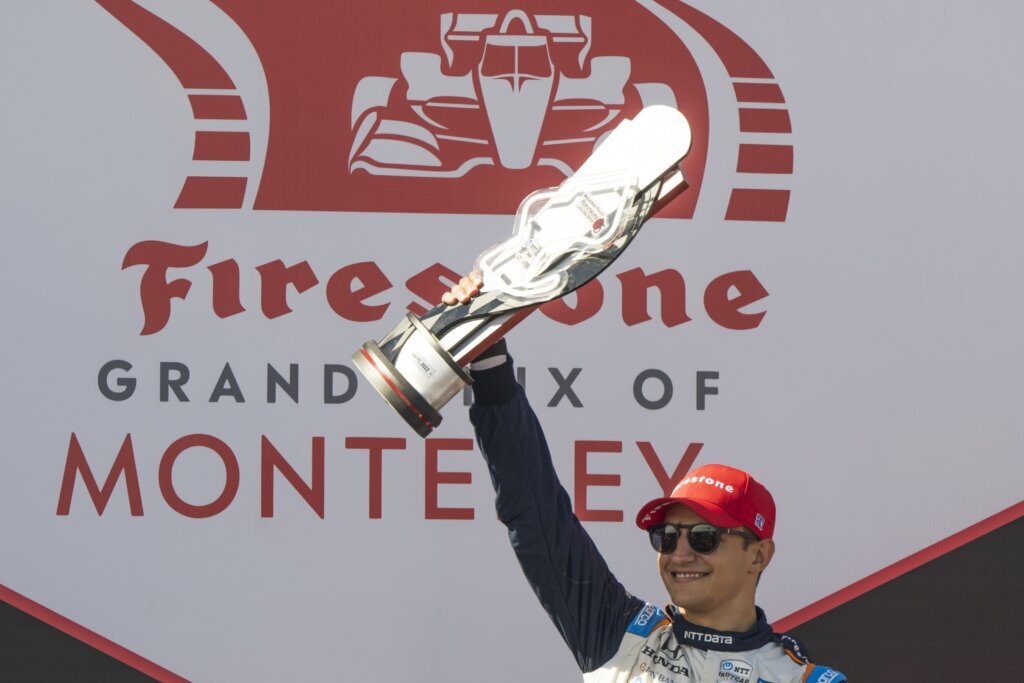 The messy saga surrounding Alex Palou’s racing future was finally cleared up Wednesday when the Spaniard said he will return to Chip Ganassi Racing next season — and then immediately hopped into one of McLaren’s cars for a Formula One test in Barcelona.

McLaren, meanwhile, said Felix Rosenqvist would return to his IndyCar seat next season as two key pieces of the series’ head-spinning silly season fell into place.

IndyCar free agency went wild in July when Palou, at the time the reigning IndyCar champion, said he had signed with McLaren Racing for 2023 just hours after Ganassi said it had picked up an option on the Spaniard.

Ganassi promptly filed suit against the driver, and as they were navigating through the courts, the sides also entered into mediation. Palou insisted he’d be a McLaren driver in 2023, but signs that something had shifted came Sunday when Palou won the IndyCar season finale at Laguna Seca.

With Ganassi standing behind him in victory lane, Palou for the first time indicated talks with his current boss were progressing and a resolution could be soon.

It came Wednesday when he tweeted he had come to an agreement to drive the No. 10 next year for a third consecutive season.

Palou said he was grateful Ganassi also will permit him to “to pursue F1 testing” with McLaren outside of his IndyCar commitments. McLaren posted on social media that both Palou and Pato O’Ward, its current IndyCar driver, were participating in a closed test with older F1 cars on Wednesday.

McLaren’s other news was that Rosenqvist will be back with its IndyCar team next year in an expanded three-car lineup that adds 2016 Indianapolis 500 winner Alexander Rossi. Rosenqvist had basically been on hold all summer because of the Palou saga.

McLaren had signed Palou, believing he was free and clear from his Ganassi contract, to drive in IndyCar and test its F1 program. Palou also was the backup plan for its F1 team if McLaren was unable to land the rights to Oscar Piastri.

The Piastri deal was settled two weeks ago, which all but ended Palou’s shot at moving to F1 with McLaren anytime soon. Getting out of his deal with Ganassi was going to be expensive — and although McLaren was willing to help fund a buyout, McLaren boss Zak Brown wasn’t going to overpay just to get Palou a year earlier than he can on the open market.

Rosenqvist, meanwhile, was in limbo.

If Palou took his seat, he was supposed to move to McLaren’s new Formula E team. But a fourth-place finish in the Indy 500 made Rosenqvist want to stay in IndyCar, and he held off on signing the FE contract with McLaren.

McLaren held the option on Rosenqvist in IndyCar through the end of this month, and the longer it took to resolve the Palou saga with Ganassi, the messier it was going to be for both teams. Rosenqvist was determined to stay in IndyCar even if it meant leaving McLaren, and McLaren was at risk of losing both Rosenqvist and Palou for 2023.

McLaren — or Ganassi or any other team — can make a run at Palou for 2024. His deal with Ganassi is his original two-year contract signed ahead of 2021 in which Ganassi held an option for the third season. The resolution announced Wednesday is not a contract extension, but is believed to have given Palou a decent salary bump that put him in line with other IndyCar champions.

Rosenqvist is also only signed through 2023, also working in his original McLaren contract.

“There’s no better way to enter the offseason than with this news,” Rosenqvist said. “I love this team, and I’m so happy to continue working with all the incredible people I’ve gotten to know over the past two seasons.”

Rosenqvist was the top driver choice for Juncos Hollinger Racing, which is expanding to two cars next season. AJ Foyt Racing also has to fill the seat being vacated by Kyle Kirkwood, who is replacing Rossi at Andretti Autosport.

It remains unclear if Andretti has another seat to fill as Colton Herta awaits word from F1’s governing body on if he’ll be approved for the Super License required to compete in the series. Red Bull and its junior team, AlphaTauri, have interest in the 22-year-old Californian, but he doesn’t have enough accumulated points in the F1 scoring system to have a license to compete.

Michael Andretti told The Associated Press he’s not looking for a replacement driver for Herta because he doesn’t expect the FIA to approve Herta for a Super License. He also said Devlin DeFrancesco will return to the team for the second year of DeFrancesco’s contract despite speculation Andretti was trying to dump the rookie.

But it was the Palou saga that was clogging up free agency, with even Indy Lights champion Linus Lundqvist unsure of where he’ll land. After clinching the title Saturday at Laguna Seca — then bursting into tears over what the 23-year-old Swede said was the greatest moment of his life — he said his racing future is unclear.

With the Indy Lights title, Lundqvist won scholarship money he can use toward an IndyCar ride, but he said most free agent activity was on pause because of Palou. He was adamant he won’t be back in Lights next season, and when current team owner Henry Malukas was asked if there’s a chance he can move Lundqvist up to IndyCar, the driver put his hands together and prayed “Say yes. Say yes. Say yes.”

HMD Motorsports this season partnered with Dale Coyne Racing to give Malukas’ son, David, a ride at the top level. Henry Malukas confirmed his son would be back with Coyne next year and didn’t rule out an option on Lundqvist.

“It is definitely potential. We’ve already talked many times about that, and I hope myself to do that,” Henry Malukas said. “It would be very cool to see him with David. I think that would be a great team and that would help each other push each other just like we did last year in Indy Lights. So it’s very possible.”

Coyne currently fields two cars, one for David Malukas and one for two-time Indianapolis 500 winner Takuma Sato, but Sato does not have a deal in place for 2023. Henry Malukas said he wasn’t sure what the Coyne lineup will look like next year.

“I don’t know about Sato, what his plan is for the future. Like zero. But Dale could run three cars,” Henry Malukas said. “Obviously depending on Honda. I know Honda are looking for a good driver (and Linus) is sitting here. I definitely support that, and hopefully we can pull it off.”