Israel Adesanya and Alexander Volkanovski believe ‘Sugar’ Sean O’Malley will likely beat Pedro Munhoz at UFC 276. In a video on Adesanya’s ‘FREESTYLEBENDER’ YouTube channel, ‘Izzy’ and ‘Volk’ acknowledged that Munhoz is a dangerous opponent for anyone, including O’Malley.

They added, however, that ‘Sugar’ is capable of defeating the veteran Munhoz in their highly-anticipated bantamweight bout. Adesanya asserted that he’s “gonna go Sean in this fight.” Volkanovski concurred and similarly picked O’Malley to win at UFC 276. Volkanovski stated:

“Yeah, man. I have to go Sean as well. He’s good, man. Like I said, that long game. And even like the way he moves, and the looks, and all that type of stuff, all that fancy-looking stuff. He uses it well with all his looks and that as well.”

Adesanya chimed in and suggested that, unlike UFC middleweight mainstay Uriah Hall, Sean O’Malley establishes the basics before using flashy techniques in his fights. ‘The Last Stylebender’ noted that he loves that O’Malley sticks to the basics first.

Volkanovski then questioned whether Munhoz would try and pressurize O’Malley and get in the latter’s face. Volkanovski and Adesanya proceeded to insinuate that although we haven’t seen much of O’Malley’s ground game, he’s not a bad grappler. ‘The Great’ even recalled watching O’Malley submit a bigger opponent at a Jiu-Jitsu tournament. Volkanovski said:

“I reckon, he [O’Malley] will be flashy. But I mean, Pedro’s gonna be a bit more experienced there. Will he put the pressure?”

Volkanovski reiterated that Munhoz might have problems against O’Malley. He added:

“But I think Sean’s gonna be too much.”

Check out Adesanya and Volkanovski’s statements at 12:20 in the video below: 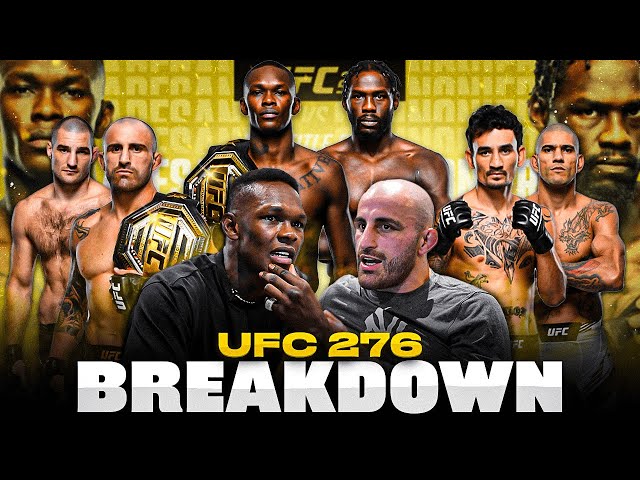 The No. 13-ranked UFC bantamweight Sean O’Malley is on a three-fight win streak. He’s got stoppage victories over Thomas Almeida, Kris Moutinho, and Raulian Paiva. Ahead of his much-awaited showdown against the No. 10-ranked Pedro Munhoz, ‘Sugar’ recently conveyed a message of confidence and promised that UFC 276 will witness his best performance yet.

Taking to Instagram, O’Malley posted a photograph from his fight against Moutinho that took place at UFC 264 last July. The photo, which shows O’Malley punching Moutinho, had the following statement attached alongside it:

“THIS WILL BE MY BEST PERFORMANCE YET. How do you guys see this fight playing out?”

Sean O’Malley will face Pedro Munhoz on the main card of the UFC 276 event. UFC middleweight champion Israel Adesanya will headline the event, defending his belt against Jared Cannonier. Meanwhile, the event’s co-headlining bout will see Alexander Volkanovski defend his UFC featherweight title in a trilogy fight against Max Holloway.