ENGLISH clubs could be banned from a Super League in a controversial “football Brexit” move.

Chelsea and Liverpool have both won the Champions League in the last three years while four of the last five runners-up have come from the Premier League.

And now a Serie A club chief has suggested a “solution” to end English superiority with the exclusive competition.

All 12 teams have so far been allowed to continue in Uefa’s club tournaments – the Champions League, Europa League and Europa Conference League. 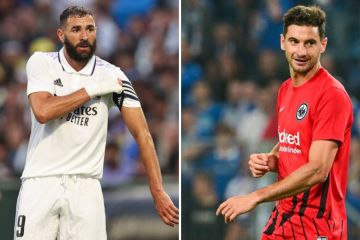 But now there are suggestions of another Super League with the notable absentees.

Adriano Galliani, former CEO and vice-president of AC Milan and now general manager at Monza, told Tuttosport: “It could be a solution – but without the English.

“There should also be a ‘Brexit’ in football.

“It would then be a real European championship, without the British.

“On the other hand, what do you think, that in April 2021 the English fled from the Super League because the fans didn’t want it?”

English teams have benefited from massive TV broadcast deals and mammoth sponsorships, elevating the Premier League to the richest division in Europe.

And Galliani is keen to help level out the playing field for the rest of the continent, especially after overseeing his hometown club’s promotion to the top flight in May for the first time in their 109-year history.

But Monza simply cannot compete financially with the equivalent teams in England.

He added: “The 20 clubs in the English Premier League make almost four times more than the 20 in the Italian Serie A.

“A newly-promoted Premier League team earns 160m (£135m). How can I compete with Nottingham Forest?”

Relief for Nupur Sharma in SC, all FIRs against her to be clubbed