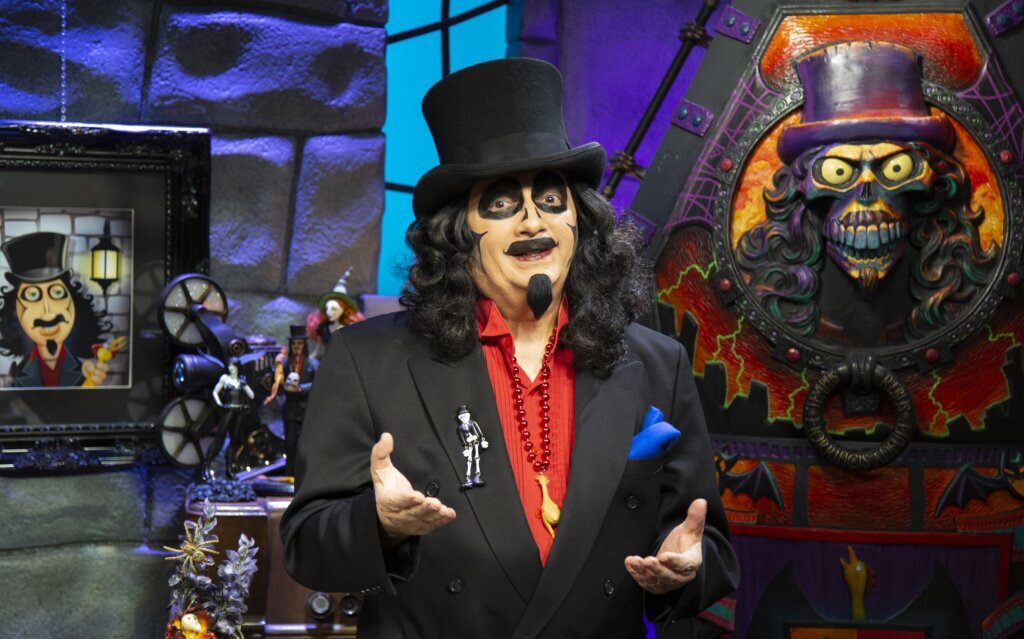 But it’s a compliment he received from Rick Baker, a seven-time Oscar winner for special make-up effects, that most gratifies him. Koz has played the wisecracking, endearingly cheesy, old-school-horror-loving Svengoolie for nearly three decades.

“’I own all these movies, but the reason I watch your show is I want to see you,’” Koz recalled Baker telling him when they met a few years ago at Comic-Con in New York.

Koz, whose low-key sincerity contrasts with his star turn as the outlandishly costumed Svengoolie, was anointed by the character’s originator, Jerry G. Bishop, as his successor. Koz gives the horror and sci-fi movies he showcases on Saturday nights more credit than his comic accompaniment, which tends to favor corny puns and props.

“I think it definitely is the films,” he said. “I know when we started doing this stuff, I don’t think, for example, the Universal classics had run in a lot of television markets for more than 20 years.”

He counts all the studio’s original monster films as personal favorites, including “Frankenstein” with Boris Karloff and “Dracula” starring Bela Lugosi, both released in 1931, and “The Wolf Man” with Lon Chaney Jr. from 1941.

“Jumping to the 1950s, ‘The Creature from the Black Lagoon,’ which I think was one of the most original of the monsters,” he said. “And I have to admit, ‘Abbott and Costello Meet Frankenstein’ is another favorite of mine,” Koz said of the 1948 film starring the famed comedy duo of Bud Abbott and Lou Costello.

Giving viewers details and history about actors and films is important to Koz, who draws on the extensive book collection he began long before coming to TV.

The comic trappings are a “Svengoolie” draw, Koz acknowledges, and he clearly gets a kick out of writing and performing them. That includes ditties that he sings with piano backup from his longtime friend and professional musician Doug Scharf (“Svengoolie” stage name, cue the groans: Doug Graves). Also in the cast is Kerwyn, a chicken puppet voiced by Koz, who is distinct from the rubber chickens that pelt the host when he delivers an especially bad joke.

Koz, a native of the Chicago suburb of Morton Grove who never left town, ended up working with radio and TV personality Bishop after sending him comedy material. Bishop’s hippie version of “Svengoolie” aired locally for a few years in the early 1970s, with Koz succeeding him as “Son of Svengoolie” from 1979 to 1986. When he consulted Bishop about reviving it in 1995, his mentor told him, “’You’re all grown up, just be Svengoolie.’”

“He was so kind to more or less turn the keys to the franchise over to me, and more important, that he had the faith in me and felt I could do it. I owe everything to him,” Koz said of Bishop, who died in 2013.

Koz gets a deserved MeTV tribute throughout October dubbed “Svengoolie’s Halloween BOOnanza.” The host, as usual, will be dressed appropriately: comically ghoulish makeup — Koz does his own — flowing dark wig, top hat and peaked-lapel jacket in formal black.

The salute includes “Svengoolie Uncrypted,” which Koz describes as a “documentary-slash-entertainment program” that details his career and follows him to horror conventions. MeTV promises a “crypt-shaking special reveal” in the hourlong special airing at 9 p.m. EDT Saturday on the broadcast network.

It’s proceeded at 7 p.m. EDT by a showing of “Trilogy of Terror,” the 1975 TV movie starring Karen Black that became a cult classic for the final segment in which Black’s character is terrorized by a fetish doll come to life. Also, the second season of “Sventoonie,” the animated companion series to “Svengoolie,” will debut with a one-hour episode (10 p.m. EDT).

Sundays throughout October will feature Halloween-themed blocks of scary episodes from shows that fit MeTV’s vintage series portfolio, including “The Brady Bunch,” “My Three Sons” and “Kolchak: The Night Stalker,” with Koz planning to pop up throughout.

Sabin said both Koz and the show are worth the effort. “Svengoolie,” which had been airing on local TV in Chicago, where it’s produced, gained national distribution on MeTV in 2011 and performs well for the network.

“Rich is the real deal. He does something that most television people don’t do. He writes all his own material, he hosts the show, which is produced with three to four people,” Sabin said. The company has trusted him with creative freedom and in return “he has delivered a kitschy, classy MeTV program for us.”

Hamill, of “Star Wars” fame, has expressed his affection for the show both to Koz and on social media over the years, posing in a “Svengoolie” T-shirt and, in a 2013 tweet, complimenting the set’s “awesome new coffin.”

Joe Mantegna (“Criminal Minds”) gave Koz an appreciative YouTube shoutout last January, and a photo on Lady Gaga’s Twitter feed in 2020 showed her in a black sweatshirt with a partially visible Svengoolie “Official Chicken Thrower” logo. There was no immediate reply to an email requesting comment from the actor-pop star’s representative.

Koz, 70, said he has no plans to say farewell to the show or to the character.