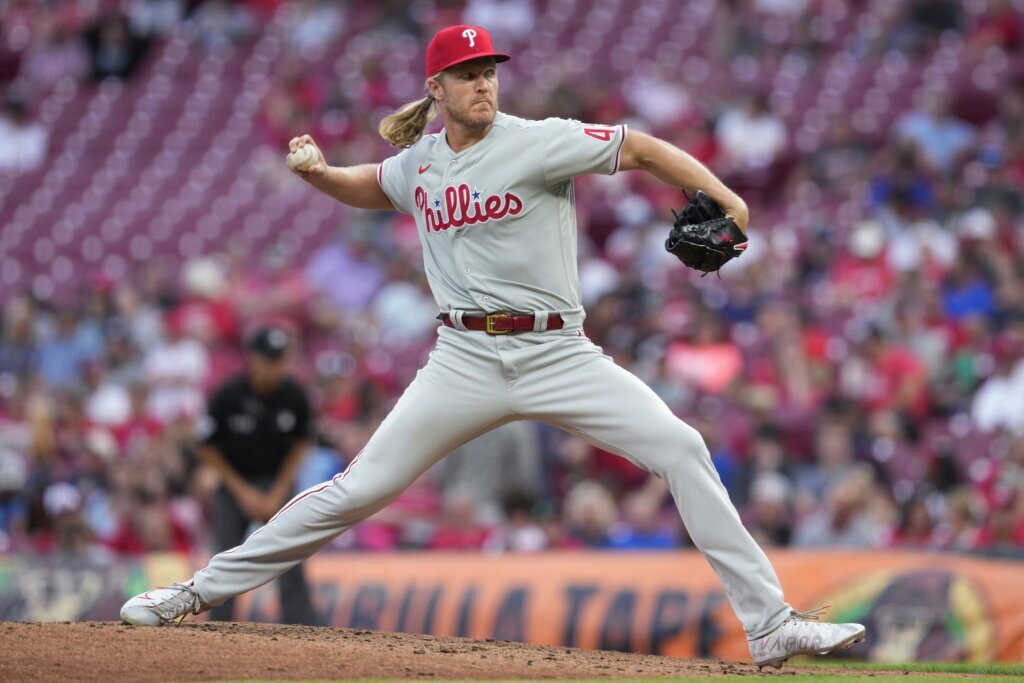 CINCINNATI (AP) — Noah Syndergaard won for the second time in three starts since being traded to Philadelphia and Edmundo Sosa drove in three runs as the Phillies beat the Cincinnati Reds 4-3 on Monday night.

Syndergaard (7-8), who had a career 2.11 ERA against Cincinnati, his lowest against any team, allowed three earned runs through seven innings. The 29-year-old right-hander was acquired from the Los Angeles Angels at the trade deadline.

Michael Papierski put the Reds ahead with a two-run single in the second, but Syndergaard allowed just three hits over the next five innings.

Sosa’s two-run single highlighted a three-run third for the Phillies. He also had an RBI double in the fifth.

Jake Fraley led off the eighth with a solo homer, his fourth of the season, and Syndergaard was done after 77 pitches.

Seranthony Dominguez notched his ninth save in 10 chances.

Nick Castellanos who was an All-Star with the Reds last season, returned to Cincinnati for the first time since signing as a free agent with the Phillies in March. He went 1 for 5 with an RBI.

“I didn’t have (a ceremony) when I went back to Detroit and I was there for six years,” Castellanos said. “The fact that I’m getting one here after spending a year and 60 games here, it means a lot.”

Phillies outfielder Bryce Harper posted an Instagram story of himself taking swings during a BP session at Citizens Bank Park on Monday, and interim manager Rob Thomson confirmed the 60-swing session went well. “I just texted him and he said he feels great,” Thomson said.

It was the first time Harper has swung a bat since having his left thumb fractured by a Blake Snell pitch on June 25. Harper will have another batting practice session on Wednesday and hit off a high-speed pitching machine. There is no timetable for him to begin a rehab assignment.

Phillies: RHP Corey Knebel was placed on the 15-day IL with a right lat strain. Knebel injured himself throwing a pitch in the seventh inning on Sunday. He underwent an MRI on Monday to determine the extent of the injury.

Reds: 2B Jonathan India (left leg contusion) was scratched from the starting lineup after doing pregame work. … OF Nick Senzel (hamstring tightness) could return to the lineup as early as Tuesday.

‘Would never acquire a loss-making business’: Ola CEO on merger with Uber