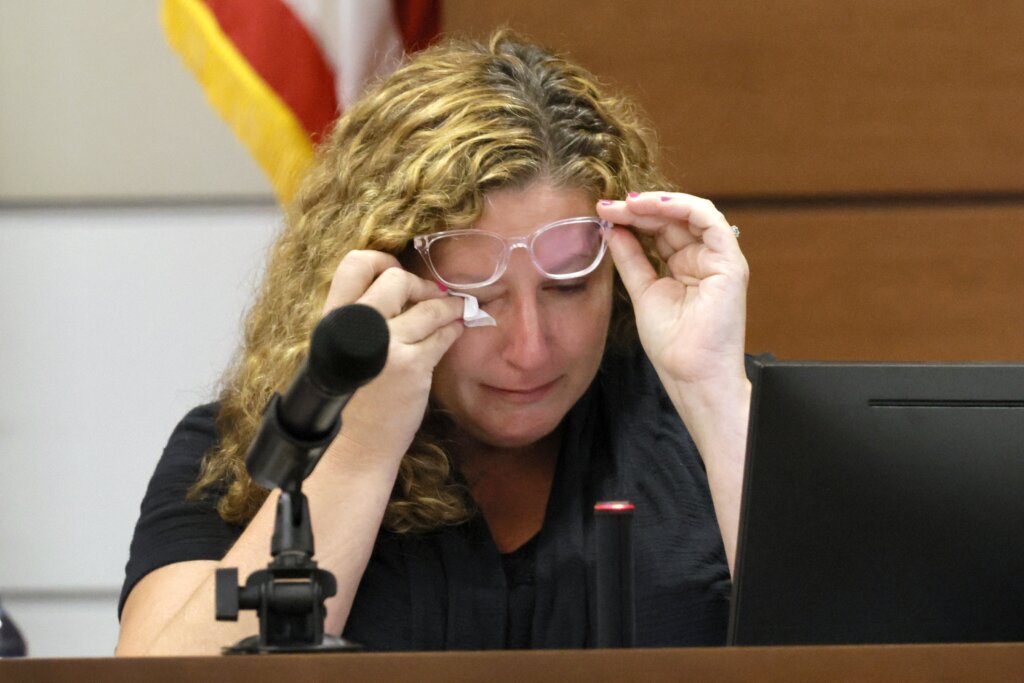 Ivy Schamis was leading students through a discussion about the 1936 Olympics in Nazi Germany when Nick Dworet correctly answered that Adolf Dassler founded the Adidas shoe company, adding that Dassler’s brother founded the rival Puma brand.

It was then they heard the first gunshots in the hallway, and Cruz began firing through the glass on her classroom door.

“It was really seconds later that the barrel of that AR—15 just ambushed our classroom. It came right through that glass panel and was just shooting everywhere. It was very loud. Very frightening. I kept thinking about these kids who should not be experiencing this at all,” she testified, wiping her eyes with tissue.

She said the students scrambled to find safety behind furniture, but didn’t panic and acted with bravery and maturity as they waited to be rescued. Three students were wounded in her class and two were killed: Dworet and Helena Ramsay, both 17.

When shown their portraits, she began to weep.

Dworet’s brother Alexander was grazed by a bullet in a classroom across the hall, where three students were killed and several more wounded. English teacher Dara Hass testified Tuesday about how Cruz fired through a window in her door.

Cruz, 23, pleaded guilty in October to 17 counts of first-degree murder for the Feb. 14, 2018, massacre. The jury must decide if the former Marjory Stoneman Douglas student should be sentenced to death or life without parole for the nation’s deadliest mass shooting to go before a jury. The trial is expected to last through at least October.

Nine other gunmen who killed at least 17 people died during or immediately after their shootings, either by suicide or police gunfire. The suspect in the 2019 slaying of 23 people at a Walmart in El Paso, Texas, is awaiting trial.

The testimony came one day after jurors saw surveillance video of the shooting, with many victims being gunned down at point-blank range. Cruz also killed some of the wounded by firing into them a second time as they lay on the floor.

When jurors eventually get the case, they will vote 17 times, once for each of the victims, on whether to recommend capital punishment.

Every vote must be unanimous for Cruz to receive death. A non-unanimous vote for any one of the victims would mean life in prison for the killing of that person.

The jurors are told that to vote for the death penalty, the aggravating circumstances presented by the prosecution for the victim in question must, in their judgment, outweigh mitigating factors presented by the defense.

Regardless of the evidence, any juror can vote for life in prison out of mercy. During jury selection, the panelists said under oath that they are capable of voting for either sentence.

AP reporter Freida Frisaro in Miami contributed to this story

How much Cristiano Ronaldo, Lionel Messi and other top stars’ car collection costs compare with Man Utd star on £18m