The Serie A side led 3-0 at half-time and added a fourth before Luis Diaz pulled one back.

An incensed Jamie Carragher slammed the Reds just five minutes into the contest, presenting Neville with the opportunity to poke fun at Jurgen Klopp’s side.

And in response Neville said: “Thanks Jurgen👍🏻.”

The Sky Sports pundit also tweeted what has now become a trademark selfie of him guzzling down wine when things are not going Liverpool’s way. 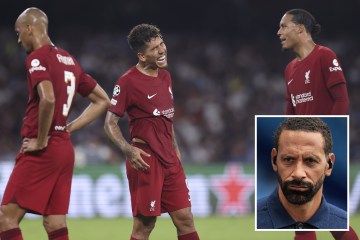 Carragher was full of criticism for his former team, tweeting at half-time: “Not seen many halves worse than this under Klopp.

“A defensive shambles. Matip needs to come on for Gomez.”

Rio Ferdinand shared a similar sentiment and blasted the Reds for a lack of effort.

He said during the break: “That’s an embarrassing 45 minutes. You can’t accept lack of effort lack of desire.”

“Liverpool cannot continue with this high line & playing offside while the intensity of the team, especially in midfield is non-existent.

“You have to adapt. It’s been evident all season.”