The pair of next generation stars are set to fight at 157lb on Saturday at the O2 Arena.

But Eubank Sr voiced concerns over the bout with his son having to weigh a career-lowest.

So much so that he has campaigned to have the fight scrapped, fearing the worst for his eldest son.

“You know what three pounds beneath the middleweight limit at 33-years-old can do. This is how brain injuries occur.” 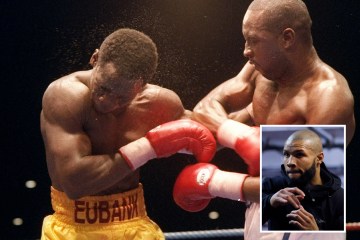 Eubank Jr, 32, is a career middleweight at 160lb but he has even campaigned at the super-middleweight limit of 168lb.

Whereas Benn, 26, comes up 10lb from welterweight as the two settled on a compromise.

There is also a rehydration clause, limiting either to what they can weigh the next day, when they hit the scales for a second time.

Despite Eubank Sr’s safety fears, his son has continued to troll his rival by posting videos eating fast food and sweet treats.

Benn slammed the father-son duo for their antics heading into the fight, 30 years after his dad Nigel’s famous rematch with Eubank Sr.

He said: “He took it to a place he didn’t need to take it.

“Maybe he was upset about his son not including him, it just shows a dysfunctional team on their side.

“How can his son be out eating burgers, then his dad is saying he’s worried about his son because he’s losing three pounds?”