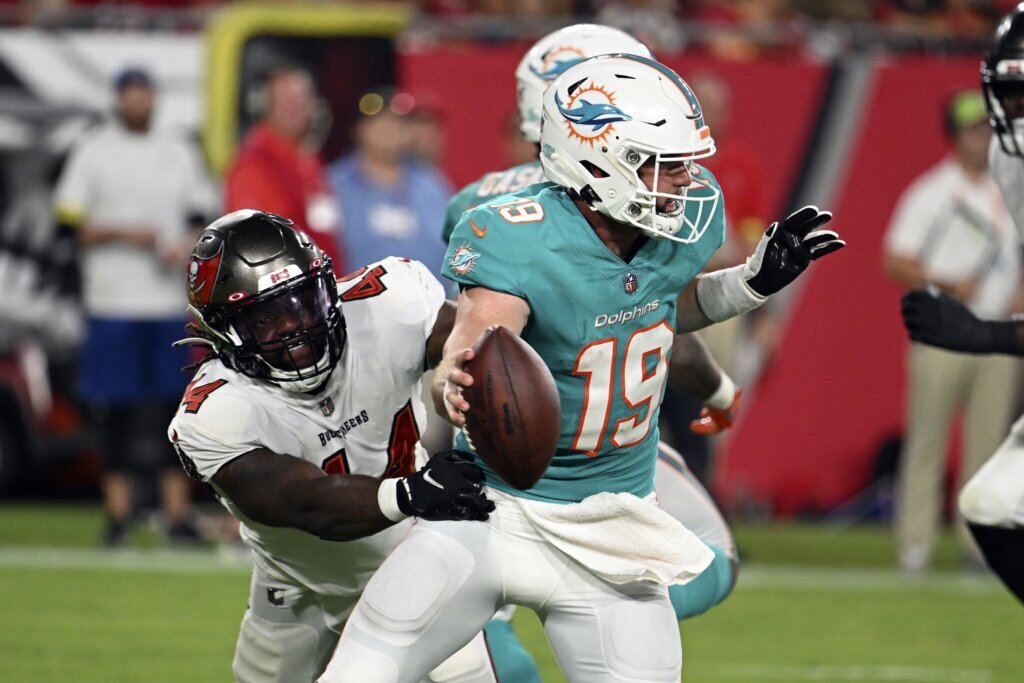 TAMPA, Fla. (AP) — Miami third-stringer Skylar Thompson threw for 218 yards and one touchdown to help the Dolphins open the preseason with a 26-24 victory over the Tampa Bay Buccaneers on Saturday night.

Jason Sanders kicked four field goals, including a 53-yarder that put the Dolphins ahead for good with just under seven minutes remaining.

Kyle Trask drove the Bucs into position to potentially win the game, but Jose Borregales’ 49-yard field goal attempt hit the right upright and bounced away as time expired.

With Tom Brady taking what Tampa Bay coach Todd Bowles described as a pre-planned break from training camp for personal reasons, Trask and No. 2 quarterback Blaine Gabbert shared playing time against the Dolphins.

Most of the starters from both teams, including Miami quarterback Tua Tagovailoa and key offseason acquisition Tyreek Hill, had the night off after the clubs scrimmaged against each other for two days earlier in the week.

The Bucs announced Thursday that Brady, who practiced the previous day against the Dolphins, will not rejoin the team until after next weekend’s preseason game at Tennessee.

Gabbert, a 12th-year pro who backed up Brady the past two seasons, started Saturday night and worked two series. His 23-yard touchdown pass to Jaelon Darden gave the Bucs an early lead. Trask extended it by completing five of six passes for 67 yards on a long drive Ke’Shawn Vaughn finished with a 1-yard scoring run.

Trask followed that up with a pair of costly turnovers: an interception on an ill-advised pass intended for rookie running back Rachaad White, and a fumble that Miami linebacker Sam Eguavoen returned 32 yards for a second-quarter TD.

The Dolphins also converted the interception into points, with Thompson tossing a 22-yard TD pass to Lynn Bowden Jr.

Thompson played the entire game, finishing 20 of 28 passing with no interceptions. Trask played the final three quarters for Tampa Bay, going 25 of 33 for 258 yards, one interception and one touchdown.

Buccaneers: Travel to Nashville next week for a pair of joint practices ahead of facing the Titans on Saturday.