Thousands turn up to welcome German team back from Euro 2022 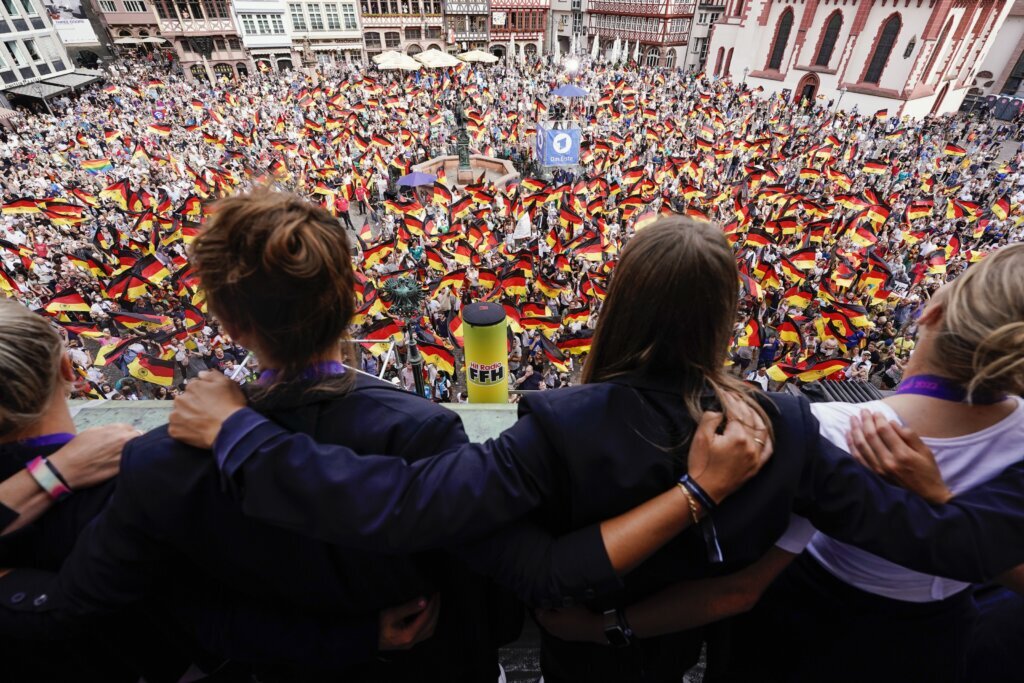 BERLIN (AP) — Germany’s narrow loss to England in the Women’s European Championship final may yet prove more beneficial for women’s soccer in the country than another title would have been.

The team was given a heroes’ welcome back in Frankfurt on Monday, when thousands of flag-waving fans turned up in front of the city hall to show their appreciation for coach Martina Voss-Tecklenburg and her players.

“It’s crazy that a performance is recognized over several weeks and not only with a win,” Voss-Tecklenburg said.

Chloe Kelly’s goal in extra time denied Germany a ninth European title and gave England its first – setting off euphoric celebrations in that country – but the German team’s run to the final stoked great excitement among fans, not least because the men have flopped at major tournaments since winning the 2014 World Cup.

An average of nearly 18 million viewers watched Sunday’s final on German broadcaster ARD, breaking an 11-year-old record for women’s soccer from the 2011 World Cup. Viewing figures for Euro 2022 increased as Germany progressed to the final. Just over 12 million saw the semifinal win over France.

Alexandra Popp, who scored six goals to steer her team into the final at Wembley, missed the decider after reporting a muscle problem in the warmup. It gave Germany’s loss a sense of tragedy without its captain, further endearing the team to its fans.

Pride in the performances and the disappointment of losing led some to accuse the German soccer federation of not doing enough to support female players and of treating women’s soccer as an afterthought compared to the men’s.

“The fact that there’s no real awareness is shown when three games in the (men’s) German Cup are scheduled at the same time as the women’s final in Wembley,” Greens parliamentary group spokeswoman Britta Haßelmann told news agency DPA. “The support for young soccer-loving girls and women has to be massively increased. It can’t fail due to financial resources at the federation. It really needs to get going now.”

Government spokesman Wolfgang Büchner said it plans to do more for women’s soccer, though he didn’t get into specifics. He said Germany’s performances in England meant it was “a role model for many women in sports and also in other areas of society.”

German soccer league chairman Hans-Joachim Watzke said he hopes Voss-Tecklenburg’s team’s run to the final – and the interest it generated at home – will have a knock-on effect for the women’s Bundesliga, where spectator numbers are usually quite low.

“Tournaments are nice and important, but ideally they should reflect on everyday sporting life. I’d like that very much because I see the immense commitment put into women’s soccer. But in the end it’s always the same – you vote with your feet,” Watzke told Kicker magazine.

Watzke, who is also chief executive of men’s heavyweight Borussia Dortmund, referred to the low income generated by women’s soccer compared to the men’s game when it comes to the debate on equal pay for male and female players.

“It’s obvious that equal pay is the goal. But with equal revenue,” Watzke said.

Speaking to daily tabloid Bild, the Germany and Bayern Munich player Lina Magull called for female players in the first and second divisions to be given a minimum wage.

“We players should earn enough from the second division so that nobody has to work part-time anymore. We’re talking about a minimum salary of 2,000 or 3,000 euros a month,” Magull said. “This is how you can advance the development of women’s soccer sustainably.”

Addressing the homecoming German team in Frankfurt, German soccer federation president Bernd Neuendorf said the players’ efforts at Euro 2022 had inspired a new beginning for women’s soccer in the country.

“We experienced the end of a tournament on Sunday, but also the start of something quite big. We can all be happy about that,” Neuendorf said. “Of course, we hope that we will bring many women and young girls into football through this wonderful tournament.”

Knight move: Why a chess set may cost $500 at top-level tournaments