TIGER WOODS and Rory McIlroy are to blast golf into the future after announcing a revolutionary “tech-infused” league to be played inside a STADIUM.

The PGA superstars yesterday launched TGL – complete with a giant virtual golf course in a custom-built arena – to fight back against the cash-rich Saudi-backed LIV series.

Six teams of three will compete in a televised two-hour event on Monday nights to complement the PGA Tour schedule.

The 15-match series – due to tee off in January 2024 – is set to see the stars hit shots into a giant video screen golf simulator and onto a green in the centre of the arena.

Fifteen-time major champion Woods, 46, said: “TGL is the next evolution within professional golf, and I am committed to helping lead it into the future.

“Embracing technology to create this unique environment gives us the ability to move our sport into prime time on a consistent basis alongside so many of sports’ biggest events. 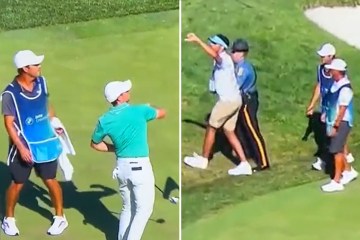 “We all know what it’s like to be in a football stadium or a basketball arena where you can watch every play, every minute of action unfold right in front of you.

“It’s something that inherently isn’t possible in traditional golf — and an aspect of TGL that will set it apart and appeal to a new generation of fans.”

Anti-LIV duo Woods and McIlroy are the first players to sign up to TGL after their company TMRW Sports partnered with the PGA to launch the series.

McIlroy, 33, added: “TGL will tap into the appeal of team golf within an exciting, fan-friendly environment, comparable to sitting courtside at an NBA game.

“ TGL will widen the appeal of golf to younger and more diverse fans and serve as another avenue to introduce people to the game I love.”

PGA Tour chief Jay Monahan confirmed LIV rebels will not be allowed to rejoin the tour after golf’s top players committed to play at least 20 tour events a year next season.

The events include four major championships, The Players Championship and 12 “elevated” tournaments a year with an average purse of £17 million.

Players can then decide a minimum of three other PGA tournaments to their schedules with stars now guaranteed a minimum £423,000 for playing in 15 events which rookies can take up front.

When asked if LIV players could make a u-turn after the changes, Monahan said: “No.

“The players who joined the LIV Golf Series and they’ve made that commitment and many have made a multi-year commitment.

“I’ve been clear throughout, every player has a choice and I respect that choice.”

“Our top players are firmly behind the Tour, helping us deliver an unmatched product to our fans, who will be all but guaranteed to see the best players competing against each other in 20 events or more throughout the season.”

The three FedExCup Playoffs, the Genesis Invitational, Arnold Palmer Invitational, Memorial Tournament, WGC-Dell Match Play Championship and the Sentry Tournament of Champions have been listed as elevated events with the remaining four yet to be announced.

The PGA Tour also doubled the purse of their Player Impact Program to £84.7m which financially rewards 20 of the biggest names.

Rams think they have talent, tenacity for Super Bowl repeat