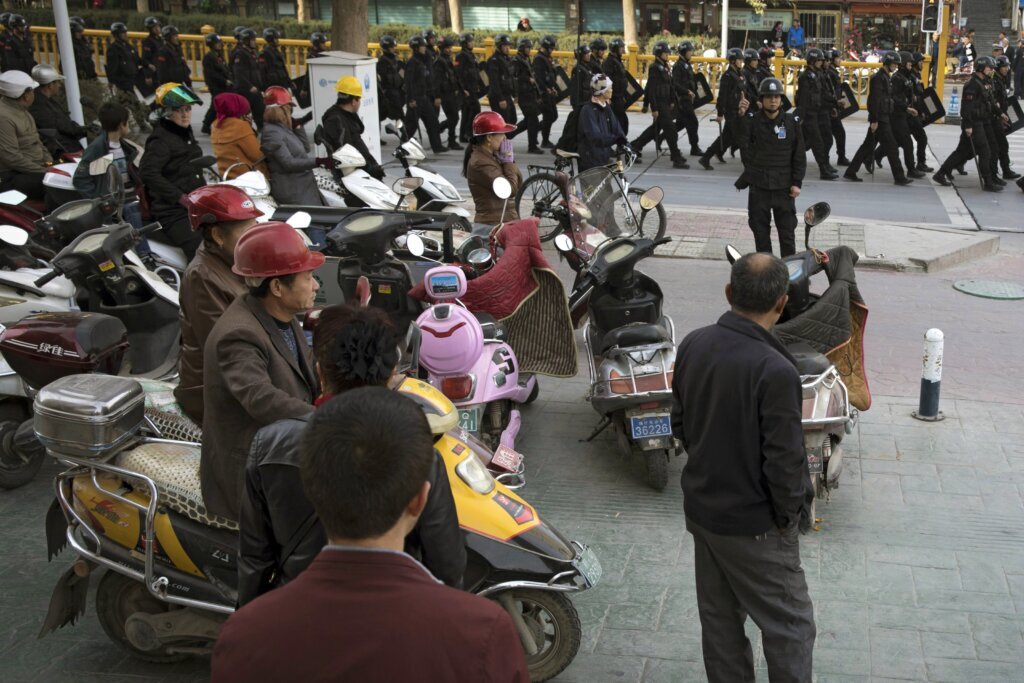 BEIJING (AP) — The U.N. accused China of serious human rights violations that may amount to “crimes against humanity” in…

BEIJING (AP) — The U.N. accused China of serious human rights violations that may amount to “crimes against humanity” in a long-delayed report examining a crackdown on Uyghurs and other mostly Muslim ethnic groups. Beijing on Thursday denounced the assessment as a fabrication cooked up by Western nations.

For several years, human rights groups have accused China of sweeping a million or more people from the minority groups into detention camps in a ruthless campaign against extremism that has struck fear into large segments of the population in the far western province of Xinjiang.

The assessment from the Geneva-based U.N. human rights office largely corroborated earlier reporting by researchers, advocacy groups and the news media, and it added the weight of the world body to the conclusions. But it was not clear what impact it would have.

Still, among Uyghurs who have fled overseas, there was a palpable sense of relief that the report had finally seen the light of day since many worried that it would never be published. Several saw it as a vindication of their cause and of years of advocacy work.

“The report is pretty damning, and a strong indictment on China’s crimes against humanity,” said Rayhan Asat, a Uyghur lawyer whose brother is imprisoned in Xinjiang. “For years, the Chinese government has said the Uyghurs are terrorists. Now, we can point to them and say, you’re the terrorists.”

Human rights groups, Japan and Germany also quickly welcomed the report, which had become caught up in a tug-of-war between China and major Western nations as well as human rights groups that have criticized the repeated delays in releasing the document. Many Geneva diplomats believe it was nearly complete a year ago.

The assessment released late Wednesday concluded that China has committed serious human rights violations under its anti-terrorism and anti-extremism policies and calls for “urgent attention” from the U.N., the world community and China itself to address them.

Human rights groups renewed calls for the U.N. Human Rights Council, which meets next month, to set up an independent international body to investigate the allegations. But China showed no sign of backing off its blanket denials or portraying the criticism as a politicized smear campaign.

“The assessment is a patchwork of false information that serves as political tools for the U.S. and other Western countries to strategically use Xinjiang to contain China,” Foreign Ministry spokesperson Wang Wenbin said. “It again shows that the U.N. Human Rights Office has been reduced to an enforcer and accomplice of the U.S. and other Western countries.”

In a sign of China’s fury, it issued a 122-page rebuttal, entitled “Fight against Terrorism and Extremism in Xinjiang: Truth and Facts,” that was posted by the U.N. along with the report.

Its findings were drawn in part from interviews with former detainees and others familiar with conditions at eight detention centers.

The report said that descriptions of the detentions were marked by patterns of torture and other cruel and inhumane treatment and that allegations of rape and other sexual violence appeared credible.

“The extent of arbitrary and discriminatory detention of members of Uyghur and other predominantly Muslim groups … in (the) context of restrictions and deprivation more generally of fundamental rights … may constitute international crimes, in particular crimes against humanity,” the report said.

It made no mention of genocide, which some countries, including the United States, have accused China of committing in Xinjiang.

The rights office said it could not confirm estimates that a million or more people were detained in the internment camps in Xinjiang, but added it was “reasonable to conclude that a pattern of large-scale arbitrary detention occurred” at least between 2017 and 2019.

Beijing has closed many of the camps, which it called vocational training and education centers, but hundreds of thousands of people continue to languish in prison, many on vague, secret charges.

The report called on China to release all individuals arbitrarily detained and to clarify the whereabouts of those who have disappeared and whose families are seeking information about them.

Japan, which has recently become more vocal in its criticism of China’s conduct in Xinjiang, was one of the first foreign governments to comment on the report.

“Japan is highly concerned about human rights conditions in Xinjiang, and we believe that it is important that universal values such as freedom, basic human rights and rule of law are also guaranteed in China,” Chief Cabinet Secretary Hirokazu Matsuno said.

A German Foreign Ministry statement also welcomed the publication of the report, saying it confirms there is cause for the “greatest concern.” It called for the immediate release of all those arbitrarily detained and said that Germany was working with the EU to combat the use of forced labor — as has been alleged in the production of goods from Xinjiang that eventually are sold around the world.

Human Rights Watch said the report laid a solid foundation for further U.N. action to establish accountability for the abuses.

“Never has it been so important for the U.N. system to stand up to Beijing, and to stand with victims,” said John Fisher, the deputy director of global advocacy for the group.

That the report was released was in some ways as important as its contents.

U.N. High Commissioner for Human Rights Michelle Bachelet said she had to resist pressure both to publish and not publish. The report was published just minutes before her tenure officially ended.

She had announced in June that the report would be released by end of her four-year term on Aug. 31, triggering a swell in back-channel campaigns — including letters from civil society, civilians and governments on both sides of the issue.

“To be perfectly honest, the politicization of these serious human rights issues by some states did not help,” said Bachelet.

Critics had said a failure to publish the report would have been a glaring black mark on her tenure.

“The inexcusable delay in releasing this report casts a stain” on the record of the U.N. human rights office, said Agnès Callamard, the secretary-general of Amnesty International, “but this should not deflect from its significance.”