Tom Kim going places in a hurry, among leaders at Wyndham 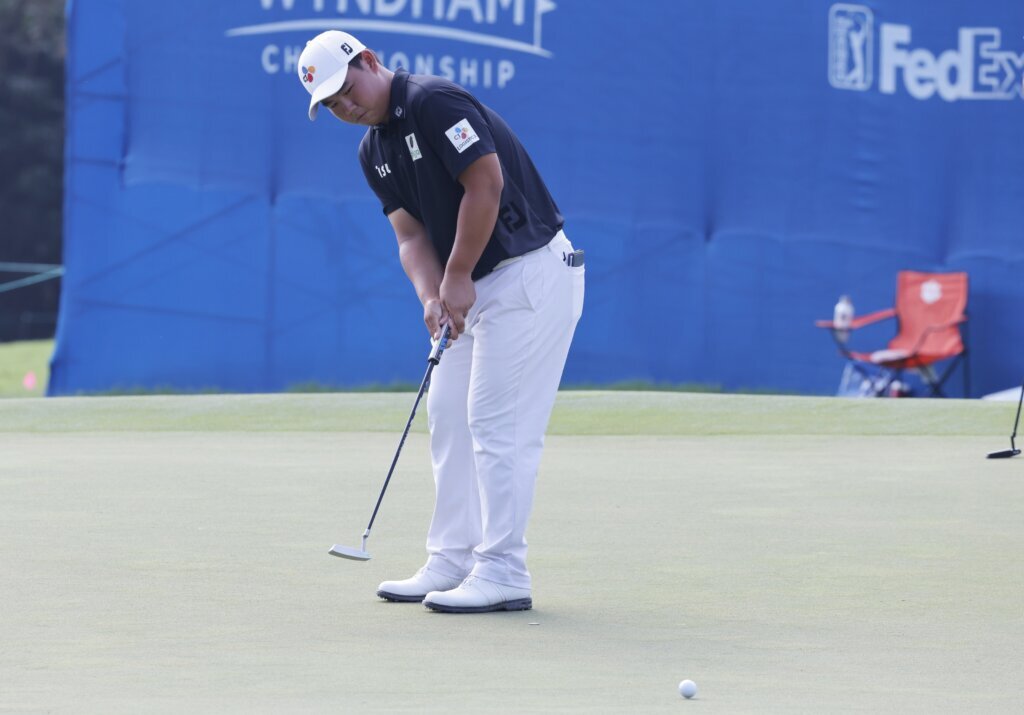 GREENSBORO, N.C. (AP) — Joohyung “Tom” Kim began the Wyndham Championship with a quadruple bogey on his first hole and…

GREENSBORO, N.C. (AP) — Joohyung “Tom” Kim began the Wyndham Championship with a quadruple bogey on his first hole and wasn’t the least bit bothered. The kid seems to be going places in a hurry.

Already assured a PGA Tour card for next season, Kim overcame his rough start with a 6-under 64 on Friday that gave him a share of the lead with Brandon Wu and Ryan Moore in the final PGA Tour event of the regular season.

Kim, a 20-year-old South Korean, has to win at Sedgefield Country Club to qualify for the FedEx Cup playoffs because he will not be considered a PGA Tour member until September when the new season starts. Only a victory gives him instant membership.

He doesn’t feel extra pressure to get it done. Considering where he was a month ago, Kim is happy to be where he is.

Kim — he goes by “Tom” because of his fascination as a kid with Thomas the Tank Engine in the TV series “Thomas & Friends” — finished third in the Scottish Open, made the cut in the British Open and 3M Open, and then finished seventh last week in the Rocket Mortgage Classic.

That gave him enough points to be assured of a card next year. And as he has shown in two days, it takes a lot to stop this train.

“If you would have told me after the first hole yesterday where I’d be after two days, I definitely would have taken it, so pretty happy,” Kim said.

“It’s just one bad hole,” he said, “Told myself, ‘You know what? I’ve got plenty of holes to bring it back if I just play well on my next 35 holes.’ And that’s exactly what I did. I played better than I thought I was going to, so it’s a bonus.”

A storm late in the afternoon led to a delay that kept the second round from finishing until Saturday morning, and there will be consequences.

Chris Gotterup needed a par on the 18th hole for the cut to be 2-under 138. But he went into a bunker, blasted long and faced a 4-foot bogey putt when he returned in the morning. He will finish no better than 1 under, which could let as many as 23 players into the weekend.

Austin Smotherman, however, was 1 under and had a 12-foot birdie putt on No. 8, his 17th hole. Smotherman is the equivalent of No. 125 in the FedEx Cup, and has to make the cut to keep alive his hopes of getting into the postseason.

Moore needs a big weekend, too. Coming off a chronic back injury, nothing short of a solo second will be enough for Moore to regain his full card for next season.

He’s not thinking about that as much as taking time off to rest and get his back in shape. He said there is deterioration where the rib joint meets the spine, and swinging a golf club isn’t necessarily the best therapy. But he can see the finish line, and a great result this week would help with his status and confidence going forward.

As for the top 125 who qualify for the postseason?

“I’m so far out of it, it doesn’t even matter at this point,” he said. “I’ve been dealing with this injury for a while. I know what’s wrong now. I just need time to deal with it. So right now it’s just trying to find a little form, a little confidence to spring me into this fall.”

Rickie Fowler is getting time off he doesn’t want. He had three straight bogeys early in his second round and rallied for a 69. That left him at even par for the tournament to miss the cut. Fowler is the equivalent of No. 123 and most likely would fall out of the top 125, missing the postseason for the second straight year.

Brian Stuard started at No. 137 in the FedEx Cup and followed his opening 65 with a 68, two shots off the lead. A strong weekend would allow him to get into the top 125.

DIVOTS: Jason Day withdrew because of an illness. He had opened with a 67. … Former Masters champion Danny Willett was headed for a missed cut and will finish out of the top 125. … Players who have joined Saudi-backed LIV Golf and were suspended will not count toward the final 125 in the FedEx Cup.