RELAXED Lewis Hamilton started his summer break in style by hitting the waves on a £20,000 electric jet-surfboard.

The ripped Mercedes driver, 37, has four weeks without races before returning to the Formula One season at Spa on August 28.

And he is sure making the most of his time off by playing in the sea.

Hamilton shared a video of himself in his swimming trunks riding on the incredible piece of kit.

A cross between a surfboard, a wakeboard and an e-scooter on the water, it unsurprisingly provided the topless star with tons of fun alongside his pal and MotoGP ace Fabio Quartararo.

The pair glided across the water under the clear blue skies, did trick jumps and even raced on the expensive tech. 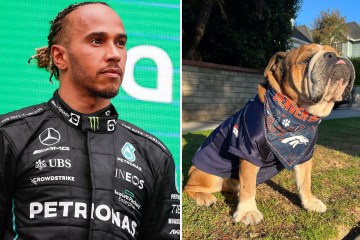 The award-winning WaveShark Jetboard can do zero to a top speed of 35MPH in just three seconds.

So thankfully Hamilton escaped unscathed – despite tumbling off after losing his back end at one point.

Hamilton posted the clips on Instagram and wrote: “And we’re off!! Kicked off the summer break with a much-needed day out on the water.

“@fabioquartararo20, always a pleasure. Some amazing weeks ahead for sure.”

Fans loved the footage – and that Hamilton was enjoying some downtime before coming back to the F1 season.

One said: “Vacation mode…ON! Looks like fun! Enjoy your break.”

Another added: “I love the little WEEE noise they make stent you jump hahaha.”

And a third joked: “I didn’t know goats liked being out on the water.”

It has been a busy week for the seven-time world champion, who was confirmed as a new member on the ownership team of NFL side Denver Broncos.

On Sunday, the Stevenage hero battled from seventh on the grid to finish second at the Hungarian Grand Prix, his fifth podium in a row.

 Why Do You Need VPN Router? 

Weasel: ‘We played our music, talked about our politics’; WHFS tribute show this weekend