LOGAN PAUL was spotted jogging in London with his model girlfriend Nina Agdal.

There have been rumours claiming Logan and Nina are dating since June when they were spotted kissing while dining with friends in the capital.

And it seems like they are quite close as they went out for a quick morning run in central.

Logan, 27, showed off his muscles as he exercised shirtless in a pair of bright orange shorts.

Nina, 30, sported a pair of navy leggings with a long sleeved black sweatshirt. 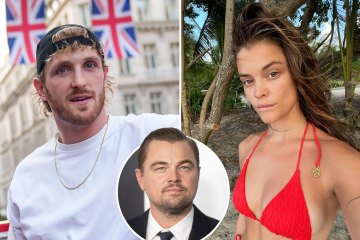 The YouTuber joined forces with The Miz and together they beat Rey Mysterio along with his son Dominik at WrestleMania.

The 27-year-old’s most recent match took place at SummerSlam last month when he beat The Miz.

The former amateur boxer is now taking some time off as his next WWE fight is unknown.

However, the social media sensation’s appearance in the UK could raise some eyebrows ahead of Clash at the Castle, which takes place this Saturday in Cardiff.

Nina, who previously dated Academy Award winner Leonardo DiCaprio, has been working as a model since 2010.

The Danish supermodel has appeared in various publications such as Vogue, Elle and Cosmopolitan.