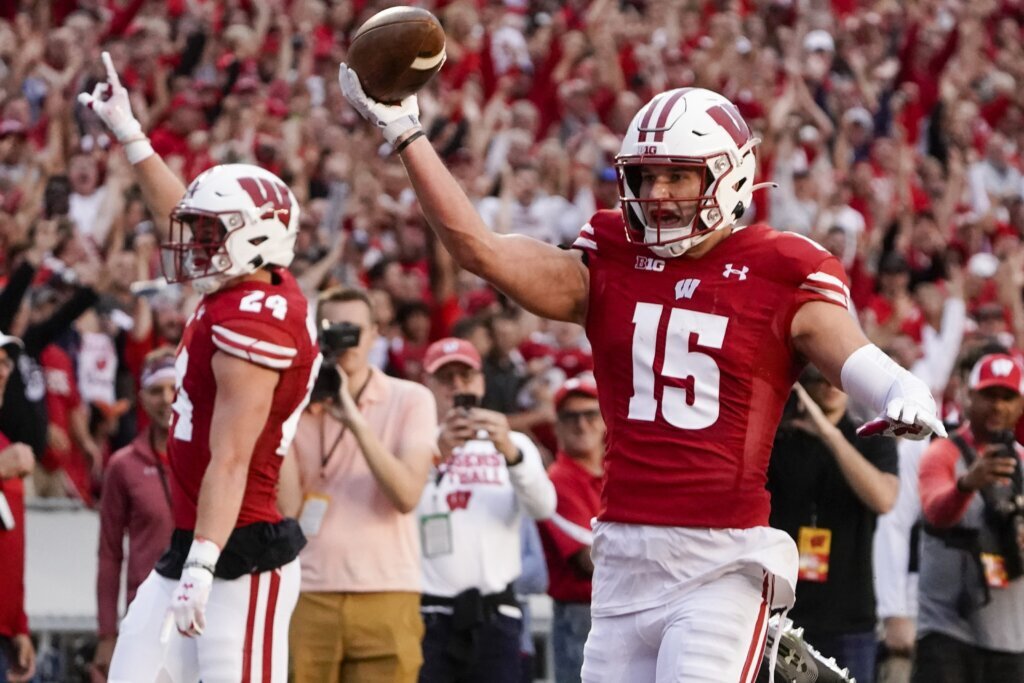 MADISON, Wis. (AP) — Wisconsin’s history of developing walk-ons into key contributors caused John Torchio to take a leap of faith and pass up a scholarship offer from the hometown school he grew up following.

Torchio lived 10 minutes away from California’s campus and regularly attended Golden Bears home games. His father and grandfather played there. He even remembers former Cal quarterback Aaron Rodgers visiting his house a couple of times during the reigning NFL MVP’s college career.

That’s why so many of Torchio’s friends were surprised when he made his college choice.

“Everyone was like, ‘What the heck? What are you doing?’ “ Torchio said. “I bet on myself.”

The gamble is paying off in a big way for Torchio and the 19th-ranked Badgers, who host Washington State on Saturday after both teams won their season openers.

“The guys really respect him,” Wisconsin coach Paul Chryst said. “They respect him because he’s consistent with who he is. He has always been a good teammate, always locked in.”

Wisconsin already has taken a couple of hits at the safety position with Travian Blaylock sustaining a season-ending knee injury in spring practice and Hunter Wohler hurting his left leg against Illinois State. That has forced the Badgers to lean more on Torchio.

He’s the latest Wisconsin walk-on to mature into a featured performer.

Since 1990, Wisconsin has produced 107 walk-ons who went on to earn scholarships and 25 who reached the NFL. The list is headed by J.J. Watt, the three-time NFL defensive player of the year.

“I wouldn’t choose to turn down a scholarship and walk on somewhere that didn’t treat a walk-on like (Wisconsin does) or have the history,” said Torchio, who said he also had offers from San Jose State and Rice, among others. “I was very aware of it.”

It hardly mattered to Torchio that a future Hall of Fame quarterback from Cal stopped by his house a few times.

Torchio was just a few years old when Rodgers played for Cal from 2003-04. Rodgers recalled Wednesday how he and former Cal punter David Lonie visited the homes of some alums as part of their window-washing business at the time.

“Dave and I still keep in touch a little bit, and it’s still one of our jokes about how literally that summer he was inside the air conditioning, hanging out and eating snacks and drinking rose and I was outside with the wipers busting my (rear) and dying outside,” the Green Bay Packers quarterback said.

By the time Torchio was old enough to start his college selection process, he was familiar with Wisconsin because his sister, Katharine, played soccer for the Badgers. One of her friends at Wisconsin was Jack Cichy, a former walk-on linebacker selected in the sixth round of the 2018 draft.

When he was considering schools, Torchio reached out to Cichy to learn more about his walk-on experience. Torchio’s own time at Wisconsin has given him an even better understanding of why walk-ons succeed in Madison.

Torchio recalls that when he got put on scholarship before the 2021 season, some teammates hadn’t even realized he’d been a walk-on.

“That’s what probably stands out as different from other programs,” Torchio said. “No one cares if you were a walk-on or not. If you can make plays and do your job, you’re going to get a shot.”

Torchio has made the most of his shots.

Although the Illinois State game was only Torchio’s fifth career start, he already has four interceptions. His three interceptions last season tied for the team lead.

No wonder teammates refer to him as “Jewelry Thief.” Torchio said the unusual nickname came from Wisconsin tight ends coach Chris Haering, back when Haering was coaching special teams.

Torchio’s nose for the football was evident Saturday. Torchio told teammate Nick Herbig he was about to pick off a pass just before delivering the longest interception return in school history.

“So much of being a ball hawk is understanding how to use that vision on the quarterback and showing up at the right place at the right time,” defensive coordinator Jim Leonhard said. “He has had that from day one.”

As fitting a moniker as “Jewelry Thief” might be, Wisconsin cornerback Jay Shaw says he has his own nickname for Torchio.

“My name for him is ‘Little Leonhard,’ “ Shaw said. “Because in that film room, he’s one of the embodiments of what Coach Leonhard was doing here back in his day.”

Leonhard was a walk-on safety at Wisconsin who earned All-America honors and played 10 seasons in the NFL. Torchio plays the same position and would love to follow a similar path.

Of course, he tries to absorb anything Leonhard tells him.

“It’s nice to know my coach, the guy who’s telling me technique, has been in my shoes and made a bunch of plays,” Torchio said.

Torchio is showing he can make big plays as well. The Badgers need that to continue all season.