TOTTENHAM’S website has claimed the club’s clash with Sporting Lisbon has been postponed leaving fans panicking over tickets.

Spurs were scheduled to face the Portuguese side on Tuesday in the Champions League.

But eagle-eyed supporters saw that their website is claiming the game is off just 48 hours before kick-off.

This follows the weekend’s matches in England being postponed after the death of Her Majesty the Queen.

There has so far been no official announcements and it is believed all Champions League games are set to go ahead.

It is thought the sign on the website is just an admin error but it has left fans worried. 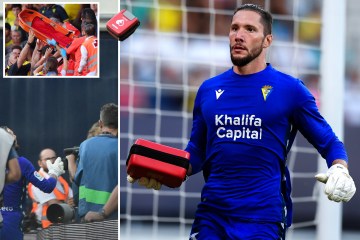 Thousands will have already booked flights and match tickets for the European game in Portugal.

One Spurs fan on Twitter wrote of the Sporting postponement claim: “This is legit on the site, unclear if an error or true. Fans need to know asap either way as sure loads flying tomorrow.”

A Tottenham supporter page wrote: “The Tottenham Hotspur website is showing our next game vs Sporting Lisbon in the Champions League as POSTPONED.

“With no official update on social media from The Club or UEFA, we are unsure whether this is a mistake or legitimate information.”

Another concerned fan site wrote: “Can you let us know what’s happening @SpursOfficial?”

The tweeter adds that they are “flying in the morning”

Tottenham have an allocation of just over 2,500 fans for the game, with tickets costing £34.

Many loyal supporters would have flights booked to jet off to Portugal over the next couple of days and are calling for reassurances.

While English games this weekend were postponed, it is not believed UEFA will postpone any European matches.

Spurs won their first Champions League game of the season against Marseille courtesy of two goals from Richarlison.

Oil prices at 7-month low, but no change in petrol, diesel prices in India