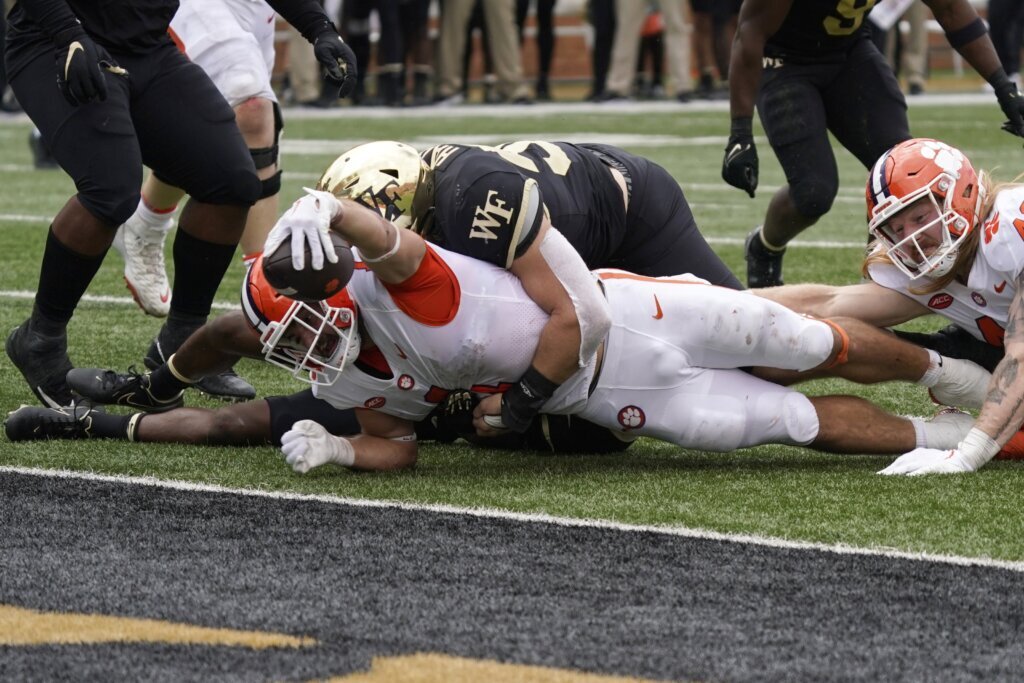 Nate Wiggins broke up Sam Hartman’s fourth-down pass in the end zone to help No. 5 Clemson hold off No. 21 Wake Forest 51-45 in double overtime on Saturday.

Wiggins had been targeted frequently by Hartman and the Wake Forest receivers but came through to knock away Hartman’s final ball for A.T. Perry. He fell to the end zone turf, then sprung up to join his team in celebration after a wild shootout between the reigning Atlantic Coast Conference’s Atlantic Division Demon Deacons and the preseason league favorite Tigers.

D.J. Uiagalelei threw for 375 yards and five touchdowns to lead Clemson (4-0, 2-0 ACC), including the go-ahead score over the middle to Davis Allen to start the second overtime.

Hartman threw for 337 yards and a program-record six touchdowns for Wake Forest (3-1, 0-1), including two each to Jahmal Banks and Donavon Greene. But the Demon Deacons stalled out near midfield on a potential winning drive to end regulation, then couldn’t stop the Tigers in the first OT after starting off with Hartman’s TD throw to Perry.

MIAMI GARDENS, Fla. (AP) — Chase Cunningham passed for 408 yards and three touchdowns, including a 98-yarder to DJ England-Chisholm, and Middle Tennessee State stunned Miami for its first win in 21 tries against ranked opponents.

England-Chisholm caught two passes — the first of them being a 71-yard touchdown in the first quarter, the other being the 98-yarder in the fourth — to help the Blue Raiders (3-1) seal the upset.

Cunningham completed 16 of 25 passes for Middle Tennessee State, including a 69-yard scoring throw to Elijah Metcalf. Cunningham and Frank Peasant also ran for scores for the Blue Raiders, and defensive end Zaylin Wood returned an interception for a touchdown.

Key’Shawn Smith returned a kickoff 91 yards for a touchdown for Miami (2-2), which turned the ball over on its first three possessions and never escaped the early hole it dug. Quarterback Tyler Van Dyke — the Atlantic Coast Conference rookie of the year last season — was pulled in the third quarter and replaced by Jake Garcia.

LUBBOCK, Texas (AP) — Trey Wolff kicked a 20-yard field goal in overtime, lifting Texas Tech over Texas after the Red Raiders overcame a two-touchdown deficit in the second half but let a lead slip away in the final seconds.

Texas’ Bijan Robinson fumbled on the first play of overtime, and Donovan Smith led the Red Raiders to the 1-yard line before Wolff’s winning kick in the Big 12 opener for both teams.

Fans of Texas Tech (3-1, 1-0) thought they had their first home win over Texas since Michael Crabtree’s last-second catch 14 years ago when Wolff kicked a 45-yarder for a 34-31 lead with 21 seconds left in regulation.

The Longhorns had other ideas. Hudson Card’s 28-yard pass to Tarique Milton got the Longhorns (2-2, 0-1) close with six seconds remaining, and they picked up another 10 yards on a quick pass with two seconds to go. Will Stone’s 48-yard kick as time expired forced overtime.

The Bulldogs (4-0) turned it over three times, struggled in the red zone, were burned on a fake punt and gave up several big plays to Kent State (1-3) in what was easily their worst performance of the season.

Kent State had a chance to make it a one-score game with less than 13 minutes remaining after Marquez Cooper scored on a 1-yard run to cap a 12-play, 75-yard drive. But a two-point conversion failed, leaving the Bulldogs with a 32-22 lead. Georgia then finished off the Golden Flashes, driving 75 yards for Kendall Milton’s 1-yard plunge on fourth-and-goal with 5 1/2 minutes to go.

Corum, who tied the school record with five rushing touchdowns against UConn a week earlier, had a career-high 30 carries. He became the first Michigan back to rush for 200 yards since Karan Higdon in 2017.

KNOXVILLE, Tenn. (AP) — Hendon Hooker threw for 348 yards and two touchdowns and ran for 112 yards and a score to lead Tennessee over Florida.

It was Tennessee’s second win over Florida in the last 18 meetings and snapped a six-game losing streak in the series. The win gave the Volunteers their first 4-0 start since 2016.

Tennessee (4-0, 1-0 Southeastern Conference) took control in the fourth quarter when it traveled 87 yards for a TD after a fumble by Gators (2-2, 0-2) quarterback Anthony Richardson.

Richardson had a career-high 453 passing yards and two touchdowns and ran for 62 and two scores in a raucous Neyland Stadium.

Tennessee led 17-14 at halftime following a first half loaded with big offensive plays on both sides.

Clifford marched his offense down the field and hit Tinsley over the middle from 5 yards out to start the scoring. He got another shot on a short field when Zakee Wheatley picked off Daniel Richardson on Central Michigan’s eighth play of the day and returned it to the Chippewa 15.

Clifford completed 22 of 34 passes for 217 yards with three touchdowns. He ran for 23 yards and another score.

The Chippewas (1-3) got their offense going in the second quarter. Richardson capped an 11-play drive by hitting Finn Hogan over the middle from two yards out to make it 14-7.

AMES, Iowa (AP) — Blake Shapen threw for 238 yards and three touchdowns as Baylor held on to beat Iowa State in the Big 12 opener for both teams.

Shapen completed 19 of his 26 passes, connecting with 11 receivers. Gavin Holmes finished with three catches for 92 yards, including a 38-yard touchdown in the fourth quarter.

The Bears (3-1) seized control midway through the third quarter, driving 93 yards in 10 plays and taking a 24-14 lead on Richard Reese’s 19-yard touchdown run.

Iowa State (3-1) was undone by two interceptions and averaged less than 3 yards per rush when the game was competitive.

PITTSBURGH (AP) — Tailback Israel Abanikanda rushed for four touchdowns and quarterback Kedon Slovis was solid in his return from injury for Pitt, which beat Rhode Island.

The Panthers (3-1) rushed for 272 yards and scored at least 30 points for the ninth time in 11 games, and Slovis had plenty of help on the ground from Abanikanda, who had 19 carries for 177 yards. The four touchdowns tied for second-most in program history.

Marquis DeShields scored a pair of touchdowns for Rhode Island (2-2), the alma mater of Pitt coach Pat Narduzzi. The Rams, playing their first-ever game against a ranked FBS opponent, trailed by 10 points at halftime before Pitt pulled away after the break.

City to hold vigil honoring those killed in Walmart…