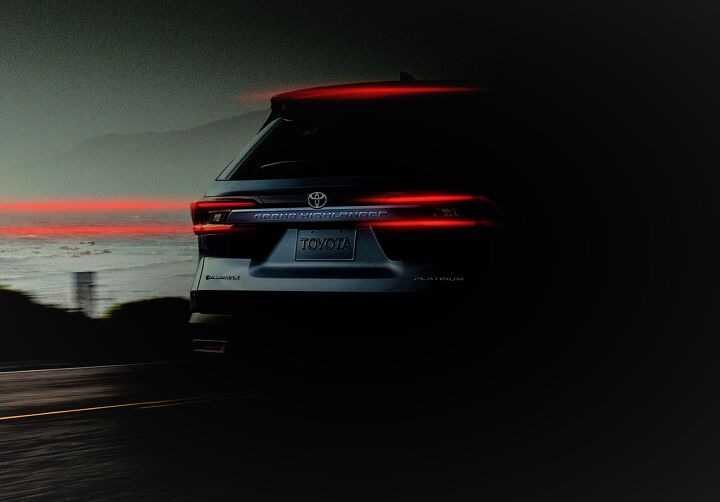 Hoping to compete with the three-row SUVs being offered by its rivals, Toyota has confirmed the existence of the Grand Highlander – adding that it’ll be on display at the Chicago Auto Show this February.

While it’s not really a petite vehicle, the current Highlander doesn’t exactly offer a surplus of legroom for those occupying the third row. This has been a problem with mid-sized crossovers and SUVs ever since the world decided it was too good for the minivan, something the wised among us knows was an egregious cultural faux pas from which we may never fully recover.

But, until people once again realize that the minivan is the thriftiest way to haul around a lot of stuff/people you don’t want to be exposed to the elements, we’re getting upsized versions of preexisting crossovers. Though minivans also did this back in their heyday, with Chrysler brands often offering Grand visions of their respective people movers. I even owned a Plymouth Grand Voyager myself back when they weren’t considered shame boxes and have known loads of people that looked at the Jeep Cherokee and said “better make mine the Grand Cherokee.”

Toyota is following the same formula with the Highlander.

Obviously, details are being kept to a minimum so that the big reveal will have more impact. But the manufacturer has indirectly confirmed that there will be a Hybrid Max variant via teaser images. On the Toyota Crown (a strange model everyone seems pretty into right now) that results in a 2.4-liter inline four-cylinder turbocharged hybrid DOHC 16-Valve D-4S dual-injection with dual VVT-i that’s good for a combined output of 340 horsepower when paired up with the electric motor.

That should make the prospective Grand Highlander reasonably peppy. Though the badging suggests that the powertrain may be limited to Premium trimmed models – which is also the case with the Crown.

It’s definitely not going to be the only way to configure the car. We’re expecting the standard Highlander’s 265-horsepower turbocharged inline-four as the base powertrain. The 3.5-liter 2GR-FKS V6 probably won’t be making an appearance, however, as it was discontinued this year so Toyota could more easily comply with emission laws. All things being equal, I’d rather have the beefier V6 on the larger model. But it might have clashed with upcoming Hybrid Max variants in terms of performance and price in addition to being dubbed taboo by regulators.

Based on the shadowy teaser photo offered by the manufacturer (which we’ve made a tad brighter), the Grand Highlander seems to be a bit boxier than the standard model. It’s also giving off subtle notes of Toyota Land Cruiser and Jeep Wagoneer. This will undoubtedly help with maximizing interior volume toward the back of the vehicle while also giving it a more premium vibe. The company called the upcoming crossover “sophisticated, spacious and powerful” so those will probably end up being its biggest strengths.

The Toyota Grand Highlander goes on display at the Chicago Auto Show on February 8th, 2023.

GeM closes in on Amazon, Flipkart in gross merchandise value

Toyota Rumored to Be Considering Smaller Sibling for Tacoma, Hilux