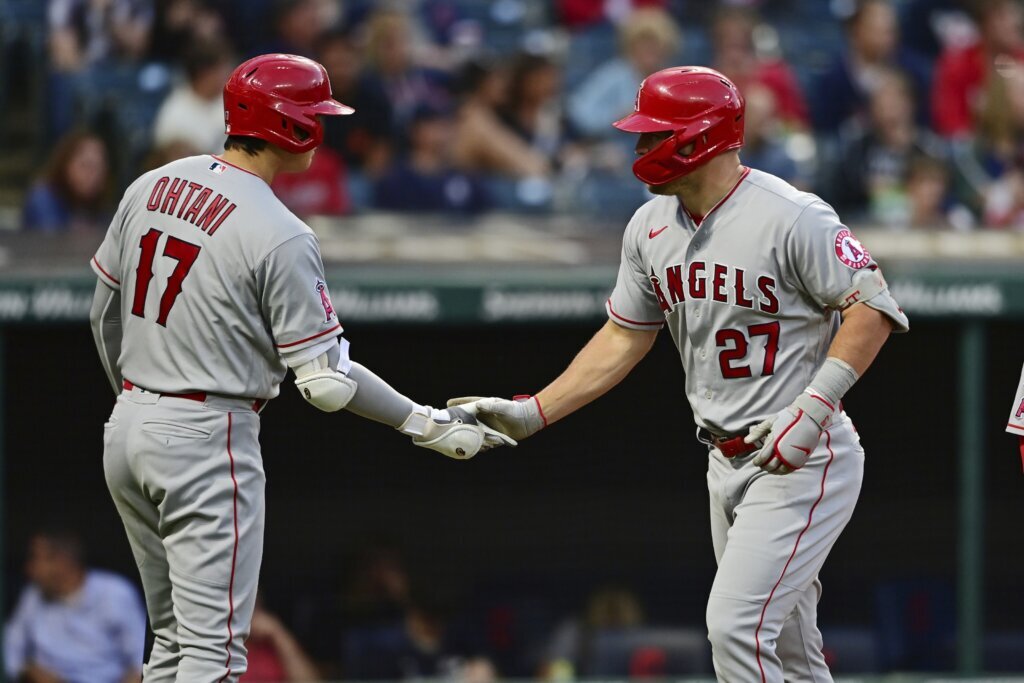 Amed Rosario doubled home Steven Kwan with the go-ahead run in the seventh for Cleveland, which increased its advantage to three games over the Chicago White Sox and five games over third-place Minnesota.

The game featured a strange sequence in the seventh when Cleveland manager Terry Francona and Angels interim manager Phil Nevin were both ejected without a pitch being thrown in-between the tossings.

Trout’s 35th homer of the season came in the fifth. The three-time AL MVP connected off Konnor Pilkington for a 422-foot drive to dead center at Progressive Field.

Pittsburgh’s Dale Long established the MLB record of eight straight games with a home run in 1956. Don Mattingly of the Yankees matched it in 1987, as did Seattle’s Ken Griffey Jr. in 1993.

Trout can match the mark on Tuesday night when the Angels continue their series with the Guardians.

Trout is the first AL player with a seven-game home run streak since Kendrys Morales of Toronto in 2018. Cincinnati’s Joey Votto homered in seven straight last season from July 24-30.

Things got heated in the seventh when Francona argued that Andrés Giménez was hit by a pitch from Ryan Tepera. Francona got ejected by umpire crew chief Ron Kulpa, and when Tepera was denied warmup throws following the delay, Nevin got tossed.

Kulpa exited, too, with two outs and two strikes in the ninth after being struck on the mask by a foul ball hit by Matt Thaiss. Second base umpire Carlos Torres replaced him behind the plate.

The Guardians took a 4-0 lead in the second off Reid Detmers, highlighted by Austin Hedges’ two-run double. Tyler Freeman and his fellow rookie, Kwan, had RBI singles.

Pilkington allowed four runs over five innings on his 25th birthday. The left-hander also was touched for a two-run homer by Matt Duffy in the fourth.

Detmers, who threw a no-hitter against Tampa Bay on May 10, gave up four runs in five innings.

Reigning AL MVP Shohei Ohtani went 1 for 3 for the Angels, who are 1-19 on the road against Cleveland since 2015.

The Guardians are in the midst of playing 18 games in a 17-day span, forcing them to adjust their rotation on the fly. Pilkington made his first start since July 23, while they haven’t decided who will work the series finale Wednesday.

Right-hander Cal Quantrill, who has a team-best 12 victories, would remain on regular rest if he pitches against the Angels. Cleveland has a makeup game Thursday at home against the White Sox.

“If Cal had his druthers, he’d stay on his fifth day,” Francona said.

Angels: 2B David Fletcher (right hand bruise), who was injured Saturday at Houston, was held out of the lineup for the second day in a row. Fletcher did fielding drills before the game and was available to pinch-hit.

MARKET LIVE: Nifty may open above 18,000 on positive global sentiment